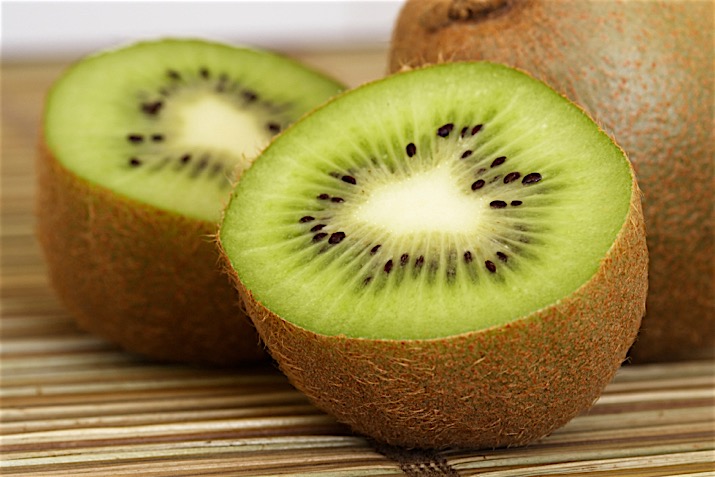 If fruit salad is where cool fruits meet to mingle, then kiwi is the quirky gal in the corner with the great fashion sense that everybody wants to know! With its vivid green color and subtle sunburst pattern, kiwi is a fun, fresh, nutritional standout. It doesn’t hurt that it's most often associated with the paradise-on-earth that is the island of New Zealand, either. The fruit is named after their national bird, the kiwi, which is brown and fuzzy on the outside, just like kiwifruit.

Kiwifruit is not native to New Zealand, however. It originated in China, where it was known as the Macaque peach. In the early 20th century, an English schoolteacher brought the kiwi from China to New Zealand, where the growing climate was just right for the fuzzy fruit to take hold. It was subsequently marketed to Europe in the 1920s as the “melonette,” but due to high import taxes on melons, its name was changed to the Chinese gooseberry. By the time it was introduced to the United States in 1952, the name kiwi had stuck, and so we have called it ever since.

Whatever you call it, call it good for you. One kiwi has as much potassium as a whole banana, ounce for ounce, and more vitamin C than an equivalent amount of orange. Its seeds contain both vitamin E and alpha-linoleic acid, a beneficial omega 3 essential fatty acid. Kiwi is also surprisingly high in fiber and contains calcium and other trace minerals. Like pineapple or papaya, the acids in kiwi fruit are efficient at tenderizing meat and seafood (in marinades) and aiding in the digestion of proteins, so kiwi is a good food to eat at the end of rich meals featuring meats and cheeses.

In the kitchen, kiwi goes further than its usual role as a colorful topping for fruit tarts or in fruit salads. Try substituting kiwi in a pineapple or mango salsa recipe, and serve it with your favorite fish or grilled tofu. Kiwi blends right into tomatillo-based salsa verde and adds a tangy, fruity lift to pork or chicken tacos. Get tropical with a mandarin orange-kiwi salsa, mingled with ginger and lime juice, and use it as a fresh, colorful topping for salmon, tilapia or even rice and beans, as in this Rice and Beans with Orange Kiwi Salsa.

Despite its bold color, the flavor of kiwi is fairly neutral and citrusy, making it a good ingredient for salads and salad dressings. The crunchy pop of kiwi seeds mimics the texture of poppy seeds, so kiwi works well to make a sweet and tangy dressing for leafy greens like spinach or arugula.  Chunks of kiwi are also a welcome addition to salads, especially when paired with contrasting elements like creamy avocado, bitter greens and salty bits of chevre (goat cheese).

For those who like to make jams and preserves, a savory kiwi-jalapeño jam is a standout, unique accompaniment to roasted meats and poultry, and is also delicious spread on fresh, hot cornbread.

When choosing kiwi, select fruits that have rough, fuzzy, but intact skin with no soft spots. It’s okay to buy very hard kiwis and allow them to ripen them on the kitchen counter. Kiwis are ripe when they just barely give to pressure. Once ripe, you can keep them in the refrigerator for a day or two before eating. Beware of kiwis that are too soft and give to pressure easily—these are overripe and may have a fermented taste. The brown, fuzzy outer layer of kiwi is, in fact, edible and mild flavored. Just wash it thoroughly to remove the fuzz before eating, and enjoy a little extra fiber!

Everyone Saves on Co+op Deals!
END_OF_DOCUMENT_TOKEN_TO_BE_REPLACED