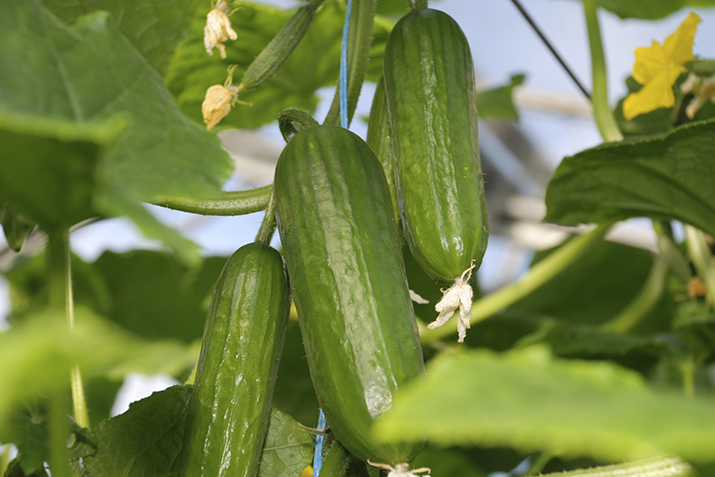 "Cool as a cucumber" is an apt idiom—cucumbers have a water content of over 90 percent and an internal temperature that's sometimes as much as 20 degrees cooler than the outside temperature.Actually a fruit with an enclosed seed, cucumber is in the same family as zucchini, pumpkin and watermelon. It was used for both food and cosmetics in ancient Egypt, Greece and Rome. The French cultivated cukes in the 9th century and the English in the 14th century. European trappers introduced Native American Indians to cucumbers in the 16th century, and in the 1800s colonial gardeners were growing many cucumber varieties.

Today, China is responsible for more than half of the global production of cucumbers, followed by Turkey, Russia, Iran and the U.S.

Cucumbers range in size and color from green to white, smooth or ridged, seedless or seeded, thinner skinned or thicker skinned.

Cucumbers' cool crispness serves as a counterbalance to hot foods: a cucumber raita with a spicy curry, for example, or a few slices of cuke on a spicy chicken sandwich. In this Thai Cucumber Salad with Peanuts, fresh cukes play against a curry dressing and jalapeños. They make a great addition to Spring Rolls, along with tofu or meat, rice and assorted veggies.

Cucumbers are distinctive and flavorful enough to be featured in their own recipes, too, like Cucumber Salad with Fresh Dill, Marinated Greek Cucumber Salad and Cucumber Salsa with Feta. They also make great partners with lively radishes in this Radish and Cucumber Salad or an array of colorful bell peppers, black olives, tomatoes and fresh mozzarella in a Classic Chopped Salad.

While often available year round, the peak season for cukes is May through July. Look for cucumbers with firm, rounded edges and bright skin. Avoid yellow, puffy cukes with soft spots (which means they're soggy) or wrinkles at the ends. If there's an area of yellow or white on one side that's okay; it's where the cucumber touched the ground. Note that thinner cukes usually have fewer seeds than thicker ones.

Cucumber seeds are edible, but they can be removed with the tip of a spoon, if you prefer.

Read more about the many types of cucumbers in our article on Kinds of Cukes. Learn about pickling cukes in Brine Time.

Everyone Saves on Co+op Deals!
END_OF_DOCUMENT_TOKEN_TO_BE_REPLACED