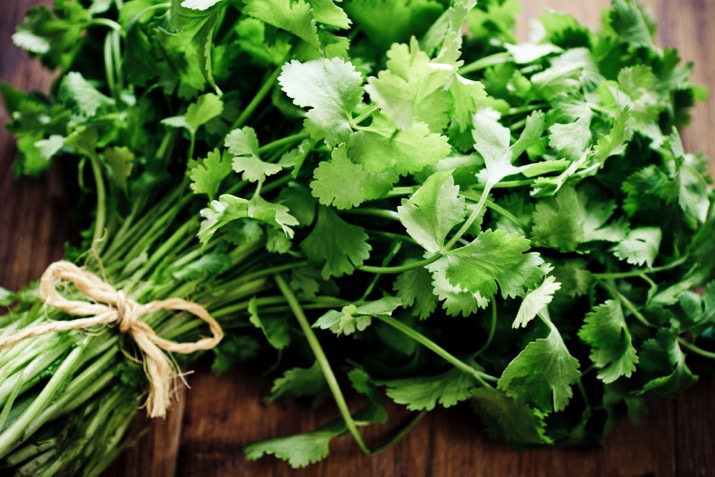 Lover or hater? When it comes to cilantro, people seem to find themselves in opposing camps. The dislike is so striking that scientists have studied possible causes and found that perhaps some people do have a small genetic sensitivity to the "soapy" smell and taste of cilantro. (Cilantro does contain aldehydes, which are also found in soaps and lotions.) The good news is that you can switch camps!

"Soapy" isn't the only adjective used to describe cilantro, or fresh coriander. Those who enjoy it often describe it as a cross between citrus and parsley. On the other hand, the name is thought to come from the Greek "koris" or "bedbug," because of the plant's similarity in smell to the crushed bug. (Yes, some bugs also contain aldehydes.)

Undeniably distinctive, cilantro is the leaf and stem of the coriander plant, Coriandrum sativum. (While coriander seeds are also used dried, as a spice, the two have very different tastes and are no substitutes for one another.) It prefers full sun and cool conditions and grows wild in Southeast Europe. Cultivated in Egypt, India and China for thousands of years, today cilantro is widely cultivated in the United States, with California leading the way.

A member of the carrot and anise family, cilantro is also related to flat Italian parsley, which it resembles in appearance only! To further complicate matters, it's also called Chinese parsley. By the way, while it's often sold and used interchangeably, culantro is not the same plant as cilantro; it's a biennial herb grown throughout the Caribbean and Central America.

Mexican, Asian, Indian, Latin American and Middle Eastern cuisines all rely on cilantro as an essential ingredient. Its pungent, citrusy tang is a good partner for chile peppers and other piquant foods in many recipes—from salsas and salads to curries. Calling for both ground coriander and fresh cilantro, Moroccan Lentil Chickpea Stew is easy to prepare yet rich in flavor and redolent with spicy aromas.

In a dressing, cilantro imbues any salad with Southwestern flair. Try this Santa Fe Black Bean Salad, where cilantro partners with lime and cumin. Or mix the fresh, chopped leaves with butter and use to season corn, seafood or poultry. Corn with Cilantro Cumin Butter also includes chili powder and lime.

Cilantro perks up any pasta dish, and it's a natural with seafood, so it's no surprise that Cilantro Lime Noodles with Shrimp and Snow Peas are irresistible. Cilantro is a terrific addition to a creamy sauce for seafood, meat or poultry, too.

Have you tried cilantro pesto? Sounds like a dish for the cilantro lovers only, but crushing the leaves is thought to dissipate the "soapy" scent and taste, so pesto might be the perfect presentation for everyone. Serve cilantro pesto on grilled sandwiches, pasta, or tofu— either Grilled Tofu with Cilantro Ginger Pesto or Baked Tofu with Ginger Cilantro Pesto.

Cilantro is available fresh year round. Look for firm, crisp leaves that are medium to dark green, with no yellow or brown spots. It's easily confused with flat-leaf parsley; use your sense of smell to tell the difference, or double-check the produce label.

Everyone Saves on Co+op Deals!
END_OF_DOCUMENT_TOKEN_TO_BE_REPLACED