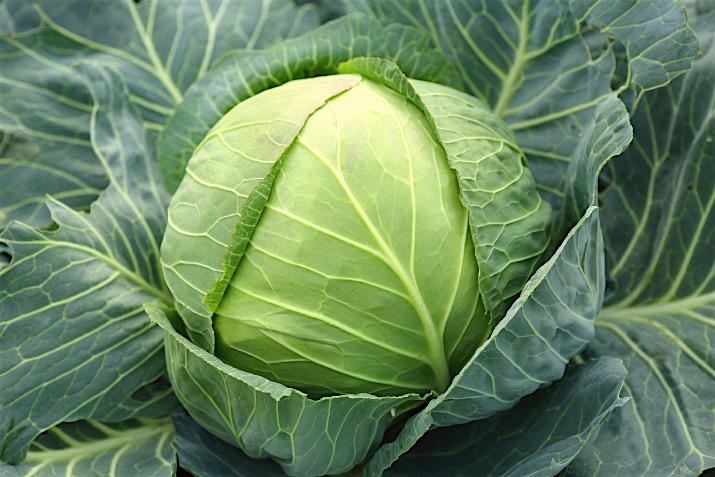 At the Alaska State Fair in 2012, a world-record cabbage tipped the scales at about the weight of a person—138.5 pounds. That's a lot of sauerkraut potential.

One of the oldest cultivated vegetables, cabbage was not only used for food, but also medicinally throughout history. Today, it's especially enjoyed by Russians, who eat about 44 pounds per person each year; that's about seven times as much as the average North American eats. Russia isn't the largest cabbage producer, though. They're third, after China and India, and the United States comes in tenth.

Cabbage is sometimes called "head cabbage," and the name cabbage comes from the Middle English "caboche" or "head" and "boche," meaning "swelling" or "bump." "Mon petit chou" or "my little cabbage" is French term of endearment.

The nutrients contained in different varieties of cabbage vary a bit, but in general they're an excellent source of vitamin C and vitamin K and a good source of riboflavin, thiamin, calcium, magnesium, vitamin A and protein. Cabbage is a very good source of fiber, manganese, folate, vitamin B6, potassium and omega-3 fatty acids, and it's high in beta-carotene.

There are at least a hundred varieties of cabbage, but the main types in the United States are green, red and Savoy. The Brassica oleracea cabbage family includes collards, kohlrabi, broccoli, Brussels sprouts, cauliflower and kale.

Flowering cabbage, like flowering kale, are non-heading cabbage varieties that are grown for ornamental uses, though they're also edible.

Asian cabbages (Brassica rapa) are related to the Western cabbages described above. Napa cabbage, also known as Chinese cabbage and celery cabbage, is perhaps the best known of the Asian cabbages. Long and light green, it looks a bit like romaine lettuce. It has a mild and slightly sweet/peppery taste. Bok choy is a mildly flavored Chinese white cabbage.

Whether you prefer robust tastes or milder flavors, there's a cabbage recipe for you—from coleslaw and colcannon to sauerkraut and stews.

You can always count on raw cabbage to give a dish texture. In this Spicy Szechuan Sprout Salad, the crunch of mung and broccoli sprouts, shitake mushrooms and green cabbage meld in an Asian chili sauce.

Cabbages combine nicely with other vegetables, especially sturdy ones like beets, turnips, celery root, kale, carrots and bell peppers. While there are plenty of traditional slaw recipes, the addition of unexpected vegetables and unusual seasonings transform them beyond the everyday.  This Curried Coleslaw is a prime example. And in Porcini Marinated Grass-Fed Beef with Charred Napa Slaw, marinated, grilled steak is served with a side of unexpected slaw fashioned out of napa cabbage and turnips.

There's no reason to limit yourself to one cabbage per dish, either. Red and green cabbages complement each other perfectly in slaws and salads. So do green cabbage and bok choy in Asian Cabbage Salad with Pan-Seared Tofu Steaks, which boasts a gingery dressing. Other flavorings that pair well with cabbages include horseradish, caraway, cumin, coriander, mustard, black pepper, fennel, savory, anise and celery seeds.

For a sensational, pungent condiment or side, try making your own Spicy Kimchee with napa cabbage, Sriracha, daikon radish, ginger and garlic. Or combine cabbage with al-dente squash in this Squash, Cabbage and Kale Kimchi.

Cabbage can make any soup or stew hearty enough for a main dish. Both green cabbage and sauerkraut combine with kielbasa, smoked ham, apples and tomatoes in Bigos, a traditional Polish stew.

Shredded cabbage is a great addition to green salads and stir-fries. It's also standard in Vietnamese Spring Rolls. When folded with fresh carrots, bell pepper, cucumber and green onions, it makes for a colorful appetizer—cool and fresh, perfectly accompanied by a peanut dipping sauce.

Because they can be planted early in the growing season or mid-season for a fall crop—and because they're good keepers—cabbages are available year round.

When choosing green and red cabbages, look for firm, dense heads; the head should feel heavy for its size. On Savoy and napa cabbages, the heads can have some give. For all cabbages, the leaves should be as undamaged as possible. (You can remove any wilted or damaged outer layers, but the fewer the better.) There should be only a few loose outer leaves.

To preserve nutrients, wash and cut cabbage right before eating. Precut or shredded cabbages are handy, but their vitamin C content is diminished.

Everyone Saves on Co+op Deals!
END_OF_DOCUMENT_TOKEN_TO_BE_REPLACED