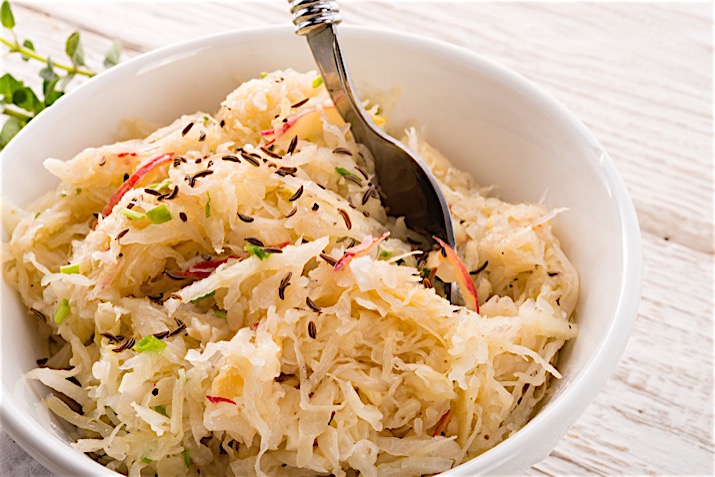 Have you noticed how popular kimchi, sauerkraut and kombucha have become? Or how yogurt in all its forms has taken over a wide swath of the dairy case? Fermentation is nothing new, but lately these probiotic foods have gone mainstream, blossoming on your co-op shelves, and moving beyond the cultures and cuisines that founded them. Fermented and pickled foods are loved for their tangy flavors, as well as their health benefits. Even sweet and sour quick-pickled onions or refrigerator pickled beets, which may not be fully fermented, add so much zing to the plate that we just crave them.

I know I discovered the joys of lactic fermentation at a critical place in history. You see, I just happened to hear about a guy who was coming through town, demonstrating how to make sauerkraut. He had just written a book, and it was 2003. It turned out, on that hot summer day, I would get to meet Sandor Katz, who was bootstrapping and couch-surfing his way across the country with his seminal book, Wild Fermentation.

Katz, a friendly and gentle soul, turned out to be a pivotal player in the current resurgence of fermented foods. With his distinctive mutton-chop sideburns and a passion for his craft, he has probably taught more people to make home-fermented foods than anyone, and has inspired countless small and local producers to start turning raw food into a source of beneficial bacteria.

Katz sees a parallel between seeding and fermenting ideas and the practices he teaches. For him, it's bigger than kraut. It's cultured food and culture. Sharing ideas about the kinds of foods you want to eat and the world you want to see is the grassroots way to make those ideas bloom. It's social change.

On that day in 2003, he patiently shredded cabbage and sprinkled it with salt as he explained how the ecosystem of bacteria all around us was going to make the cabbage into kraut, and also flourish in our digestive systems when we ate it, bringing us into harmony with our environment.

Now fermented foods are everywhere. Why has fermentation taken off in such a big way? Well, one reason is that people are learning about the health benefits of fermented foods. The same bacteria that break down foods like cabbage in kraut, barley in beer, or milk in yogurt, love to live in your gut, and continue gobbling up the fiber, sugars and starches that they need to thrive. While they are at it, they crowd out bacteria that might make you sick, and they create lots of potent chemicals that make your whole body healthy.

Yes, maintaining a balanced bacteria population in the gut helps build immunity, and digest your food so that you can fully absorb the nutrients. If you have taken antibiotics recently, you may need to replenish your inner ecosystem with tasty fermented foods.

Fermentation is such a natural process that it is really more about encouraging and harnessing it than creating some kind of complex event. In the case of kraut, salt creates an environment where harmful bacteria are not able to flourish, but lactic bacteria can. In cultured ferments, like yogurt, milk is warmed to kill off any malcontent bugs, then seeded with yogurt culture.

In the end, preserving foods with fermentation, or a simple pickling in brine, is about making them taste good. The tangy tastes of pickles and vinegars is one of our basic flavor needs. Preserving foods by putting them in an acidic environment is an ancient practice, and one that we can easily re-learn. Vegetables are appealing fresh, but once pickled, they become a mouthwatering counterpoint to other elements on a plate. Everything from creamy potato salad to a hunk of roasted meat is more interesting with a palate-cleansing pile of pickles on the side.

So after my lucky meeting with a "fermentation revivalist" I knew that those jars of refrigerated krauts and pickles held more than just veggies. They held a world of health and flavor.

Check out our fermenting recipes to get started.

Everyone Saves on Co+op Deals!
END_OF_DOCUMENT_TOKEN_TO_BE_REPLACED