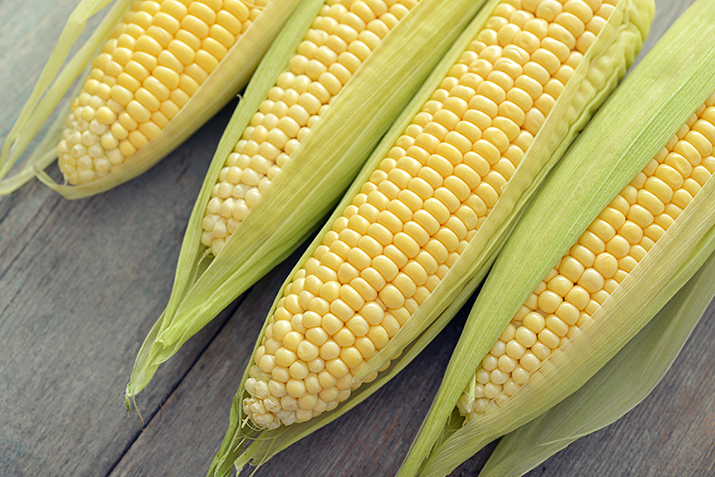 No matter how you classify it, corn is one of the world's most important crops. Teosinte, the wild ancestor of corn, has been found in Mexico dating about 9,000 years ago. Early corn, or maize as it's also called, consisted of ears that were just a few inches in length. Native Americans, early settlers and scientists have since bred corn that's fuller, longer and undoubtedly more delicious.

Did you know that there's always an even number of rows of kernels on an ear of corn? Each of those kernels (about 800 per ear) has its own piece of silk, too, which is the style of a flower—and that explains why corn is technically a fruit, though of course we treat it like a vegetable. Just to cover almost all the bases, when corn is harvested dried, as for popcorn, it's considered a grain.

Most of the corn you see growing in the United States today is field or "dent" corn (if you look at the crown of a kernel of field corn, you'll see a small indentation or dent). Yellow field corn is used mostly for animal feed, industrial purposes, like ethanol production, and high fructose corn syrup. White field corn is often milled for making food-grade starch, paper, and foods like masa, tortilla chips and grits. Another type of corn is flint corn, commonly known as “Indian corn,” which is available in the fall. The United States produces over 35% of the world's corn, and sweet corn is grown in California and in The Corn Belt: Michigan, Minnesota, South Dakota, Wisconsin, Ohio, Illinois, Indiana, Iowa, Missouri, Kansas and Nebraska. Other leading producers worldwide include China, Argentina, Brazil, France, Mexico, Romania and Africa.

The corn we grow in our gardens and pick up at produce stands and at the co-op is sweet corn, which contains twice as much sugar and less starch than field corn.

According to the USDA, 1 cup of corn contains 25% of the daily requirement for iron, half of the requirement for vitamin B6, 52% of magnesium, and 32% of protein. It's also a good source of dietary fiber and the antioxidants lutein and zeaxanthin.

There are hundreds of varieties of sweet corn, including Earlivee and Sundance (yellow), Gentleman and Stowell's Evergreen (white), Sugar & Gold and Honey Cream (bicolor). Varieties can differ in taste as well as color, with some more nutty, grassy, sweet or milky tasting than others.

Like the varieties to try, options for enjoying corn are almost endless. Cobs can be grilled, boiled, microwaved or steamed. Cook extra so you can cut the kernels off the cob and use them in other dishes (or pop them in the freezer for later). Corn kernels make a great addition to salads, as in this Black Bean and Corn Salad, as well as in salsas and relishes. Add them to quick breads, pancakes, stir-fries, pizzas, and soups and chowders, like this Chipotle Corn Chowder and this Three Sisters Soup, where it melds with its "sisters" squash and beans.

Sweet, juicy corn on the cob is the perfect side, fresh off the grill or stove. Garnish with seasoned butters (like cilantro cumin butter) and spreads, sweetened or spiced (cayenne pepper and Parmesan is one favorite combination).

Corn is central to Mexican cuisine, where you'll find it in tortillas, tamales, atole, posole, tacos, quesadillas and tostados. In India and Pakistan it's used to make unleavened bread, and in Italy it's made into polenta. Roasted corn kernels are enjoyed as a snack in Peru and across the globe in Vietnam.

Fresh corn rapidly loses sugar content once it's at room temperature, so if you're heading to a produce stand or market, you'll want to get your corn first thing in the morning and serve it as soon as possible - definitely within a few days. Choose husks with good green color and pale, fresh silk. The rows of kernels should be tight and not dented or discolored. If you pierce a kernel with your nail, it should produce a cloudy juice. Store your corn on the cob in the husk and keep it refrigerated until you're ready to eat it.

To remove corn silk without damaging the kernels, rub a damp paper towel along the cob. When cooking in water, don't add salt or it will toughen the kernel skins. And try cooking your corn for just a few minutes (don't boil away the flavor).

Canned and frozen sweet corn is a good way to enjoy this produce year round, though there's something special about a fresh ear of corn on the cob. Around the country, communities celebrate its arrival with festivals come harvest time in late summer/early fall. It's as if nature saved the best for last, and many would agree it's well worth the wait.

Everyone Saves on Co+op Deals!
END_OF_DOCUMENT_TOKEN_TO_BE_REPLACED