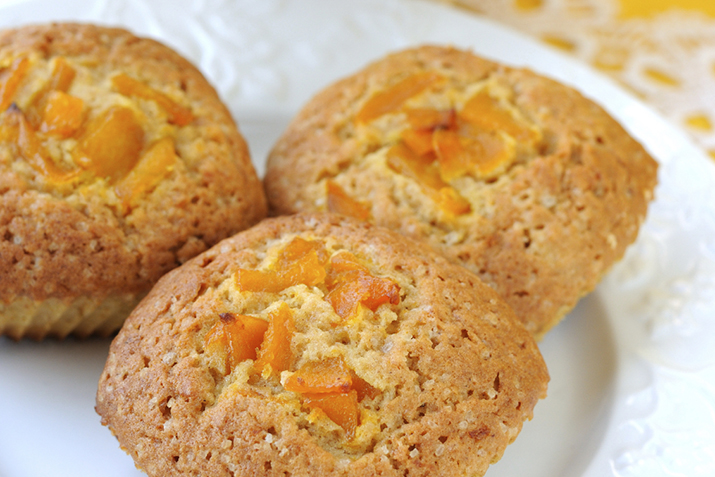 Most vegetables are, well, not sweet. We think of broccoli and green beans as savory foods, and typically consign sweet flavors to the fruit category. Yet there are plenty of sweet veggies full of natural sugars: sweet corn, carrots, sweet bell peppers, beets…and then there's winter squash.

My earliest memories of eating acorn squash were all sweet. It was a big treat when my mom would bake the scooped-out halves, then turn them over and put a thick pat of butter and a sprinkling of brown sugar in the cavity. She would bake them for a few minutes more, and serve them in sturdy bowls so that our little hands could scoop the flesh with a spoon without the squash sliding around the plate. I remember being delirious about having something so dessert-like at dinner, instead of the dreaded mushy canned lima bean or pea. Then my older brother, ever looking for a better deal, started eating just the top layer, calling out to my mother, "my butter and sugar are gone, I need more." Mom fell for it once, before scolding him that he had to eat his squash the way it came. After that, I developed my method for eating around the sweetest part, saving it for last. That way, the sweet center of the squash was like the dessert within the squash itself, a reward that I hoarded as I scooped my way around it.

I tend to think of winter squash differently than other vegetables. Maybe it's because there are so many sweet, rich varieties. Or maybe it's the association with pumpkin pie, with its fragrant spices and sweet filling. It's probably the texture, too, since the soft, creamy squash is easily mashed or pureed for use in baking.

Winter squashes are part of our American heritage. My mom's technique for roasting squash is not far removed from the Native American way of roasting a pumpkin in the coals of a fire, cradled by its own sturdy skin. They might well have adorned it with a drizzle of maple syrup in the Northern regions. The pumpkin and its family are believed to have originated in Mexico and South America, and have been cultivated since 3500 BC. Fragments of winter squash and seeds have been found in the cliff-dwellers sites in the South Western US. Native tribes were masters of companion plantings, and called Squash, Corn and Beans the "Three Sisters" because they grew so well together.

Early Colonists embraced pumpkins and squash, too. They learned to "cure" the squash, letting them age in a dry spot until the skins hardened to hold in moisture. Back before refrigeration, these squashes would have held all winter in the root cellar, long after sweet fruits had been eaten. They would have been a welcome treat, baked into a sweet bread, pie, or cornmeal porridge.

Now that we have convenient canned pumpkin, that's the only way many people have ever baked with it. I challenge you, next time you open up a can of pumpkin, taste it plain. I promise you, it is not as tasty as your own pumpkin puree would be (and it's easy to make, just halve the squash, scoop out the seeds, and place it cut side down on an oiled sheet pan. Roast at 400 F until tender when pierced with a paring knife).

The nutritious, sweet flesh of the squash is a win-win for sweets lovers. I often use it in baked goods to replace some of the fat, eggs, or sugar. Because of its assertive, well-loved flavor, a quick bread doesn't need tons of butter to taste great. Vegan bakers are familiar with how creamy squash puree can replace the bulk and binding actions of eggs in cookies, muffins, and cakes, with a little help from flax seeds. Generally you can try cutting part of the fat or eggs by using half squash to replace the same volume. For vegans, replace some of the fat and all of the eggs with squash, and use ground flax seeds as a binder.

Squash in baking is classically spiced with all our fave pumpkin pie flavors, like cinnamon, allspice, nutmeg, cloves and other warming spices. While that is delicious, don't overlook the amazing synergy of chocolate and pumpkin or other squash, like butternut or kabocha. Whether you fortify a chocolate cake with squash, or stud a squash scone with chocolate chips, you will find that squash loves chocolate. I also like to bring out the sweetness by adding something tart, like sour cream, buttermilk, yogurt, or as in the pie recipe here, crème fraîche. It makes for a tasty combination.

Nothing says holidays like pumpkin pie, and we can enjoy all the wonders of sweet squash desserts all winter long. Dig into the brilliantly colored treats of the season—you can feel that much better about having dessert when you're eating your vegetables!

Everyone Saves on Co+op Deals!
END_OF_DOCUMENT_TOKEN_TO_BE_REPLACED