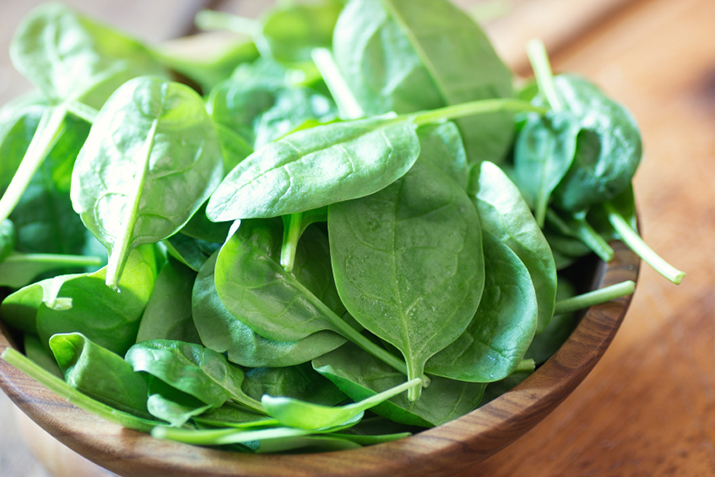 Ever wonder what a la Florentine means on a menu? Well, Catherine de'Medici, who became queen of France in 1522, so loved spinach that she reportedly insisted it be served at every meal. Because she was from Florence, dishes including spinach became known as a la Florentine.

Catherine wasn't the first royalty to prize spinach, either. In the 7th century, the King of Nepal sent spinach to China as a gift. The green leafy vegetable didn't arrive in Europe until the 11th century, and the Moors introduced it to Spain. In England, it was long called "the Spanish vegetable."

Spinach was a good choice for Catherine to include on a daily basis, as far as nutrition goes. It's an excellent source of iron, magnesium, manganese, calcium, folate, potassium and vitamins K, A, C, B6 and B2. It's also a very good source of dietary fiber, protein, phosphorus, copper, zinc and vitamin E, and a good source of omega-3 fatty acids, niacin and selenium.

Spinach belongs to the same family as Swiss chard and beets, and there are three main types. Savoy (or curly leaf) spinach has dark green, crinkly, curly leaves. Slightly bitter, it's better for cooking than eating raw. Semi-Savoy is similar to Savoy but less crinkled, making it easier to clean. It's also best when cooked. Flat-leaf spinach has smooth, spade-shaped leaves. Best eaten raw, it's the most popular of the spinaches in the United States. It's tender and a little sweet.

Raw spinach topped with sliced pears, walnut pieces, raisins and vinaigrette is heavenly, and it makes a great addition to any mixed green salad, too. It also partners well with pasta and vegetable in salads, like colorful Cheese Tortellini Salad with Spinach or tangy Ginger Miso Dressing with Squash & Spinach Salad.

Treat spinach as a simple green and slide some leaves on sandwiches or burgers instead of lettuce. You might even use spinach in place of fresh basil to make Spinach Parsley Pesto. Or, to create a fresh version of the classic spinach artichoke dip, try this Rustic Artichoke Spinach Dip, featuring jalapeño and roasted red peppers.

This tasty and substantial green has a place in main dishes, too. Add it to omelets, frittatas, and casseroles like lasagna. Combine it with barley, Parmesan and mushrooms in Spinach and Barley Dumplings, and serve them with a hearty grain salad or buttered noodles. Or partner spinach with rice and an array of vegetables to make an intriguing Quick Vegetable Bibimbap. Baby spinach is a nice addition to this comforting Split Pea Soup with Spinach.

Spinach is a mainstay for those who love their green smoothies. This Hidden-Spinach Berry Smoothie, featuring berries, banana and spinach, is unusually delicious and nutritious.

Frozen spinach is a handy and convenient staple, appropriate for most any cooked spinach dish. This recipe for Spinach and Almond-Stuffed Portobello Mushrooms uses frozen spinach, Gruyere and Italian seasoning. And these Turkey Spinach Meatballs combine frozen spinach with ground turkey. Serve them with spaghetti or in a meatball sandwich.

Spinach is at its peak in spring and fall—March through May and September through October. When purchasing fresh, you'll find it in bunches or bags, sometimes pre-washed.

Choose bright, vibrant leaves, avoiding those that are yellowing, wilting or becoming slimy. If you're purchasing bagged spinach, double check for slimy leaves and look for a "best if used by" date.

Don't wash spinach before storing. Place in a vegetable storage or plastic bag in the refrigerator for a few days.

Wash spinach well before serving, even if it's labeled pre-washed.

Everyone Saves on Co+op Deals!
END_OF_DOCUMENT_TOKEN_TO_BE_REPLACED