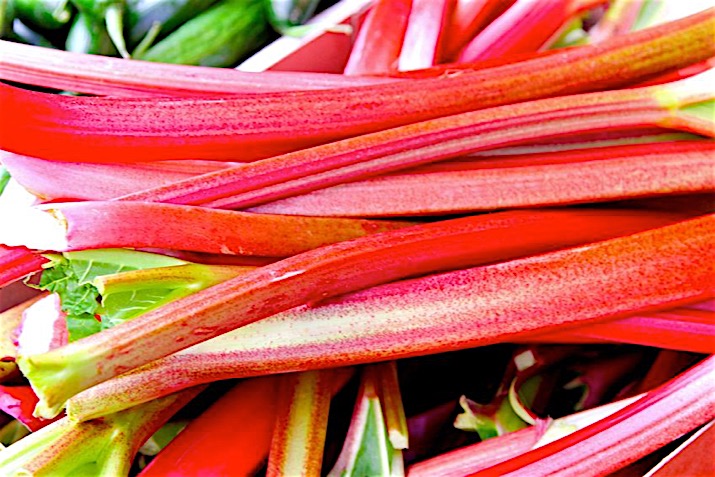 Is there a better harbinger of spring than hardy, exuberant rhubarb? A beautiful plant with large, lush leaves and fleshy stalks (called petioles) that look a bit like red celery, "the pie plant" signals the arrival of fresh foods from gardens and markets. Did you know that while it's most often enjoyed in desserts, rhubarb is actually a perennial vegetable—a leaf stem?

The Chinese have valued rhubarb for its medicinal properties for thousands of years, and in 17th-century England it sold for twice the price of opium. Its cultivation and use for food didn't begin until the 18th century, though. In the late 1700s, Ben Franklin sent rhubarb seeds to the Quakers in America, and culinary appreciation blossomed.

Rhubarb provides vitamin C and dietary fiber, as well as vitamin K and several B-complex vitamins. It also contains minerals like calcium, potassium and manganese, but they're not well absorbed by the body because they're bound by the oxalic acid content in the rhubarb. By itself rhubarb is low in calories, about 13 per half-cup serving, but because it's so tart it's often combined with a fair amount of sweetener.

In Scandinavian countries, children pucker up with sticks of fresh, tart rhubarb dipped in sugar. Rhubarb makes beautiful, delicious pies, tarts, juices and jams. In most areas where rhubarb is grown, Rhubarb Crisp is the classic recipe for celebrating its arrival each year. Other desserts play off the tartness of the stalk with sweet and creamy ingredients, like the crème fraiche in this Rhubarb Tart Parisienne with Honeyed Strawberries, or the yogurt in this delightfully light Rhubarb Yogurt Tart.

Like cranberries, chopped rhubarb will add a punch of tartness and color to muffins, biscuits, pancakes or any quick breads.

There are lots of creative ways to use rhubarb in savory dishes, too. Its tartness can replace the vinegar in dressings, as in this Rhubarb Vinaigrette. And a rhubarb sauce is unexpected and flavorful over seafood, chicken, venison or fish.

Fresh rhubarb is available as early as April and as late as August. Choose straight, firm stalks with good color. Avoid wilted stalks. Tenderness isn't generally related to the size of the stalk, although very large stalks can get pithy. If the leaves are attached, they should be crisp and fresh. Note that the leaves are not edible, since they contain a large amount of oxalic acid. One pound of fresh rhubarb equals about 3 cups chopped or 2 cups cooked.

Remove the leaves, and store the rhubarb stalks a plastic bag or veggie bag in the refrigerator for about a week. Wrapping the stalks in paper towels or a damp dishtowel is sometimes recommended. If the stalks get limp, stand them in a container of cold water for an hour or more. Chopped rhubarb can also be frozen for up to six months.

Always use a non-reactive pan (stainless steel, enamel-coated cast iron) when cooking rhubarb; otherwise the veggie and the pan will turn brown from the acids in the rhubarb.

Celebrate this wonderful vegetable when spring arrives and throughout its growing season. It's a great example of seasonal eating at its best.

Everyone Saves on Co+op Deals!
END_OF_DOCUMENT_TOKEN_TO_BE_REPLACED