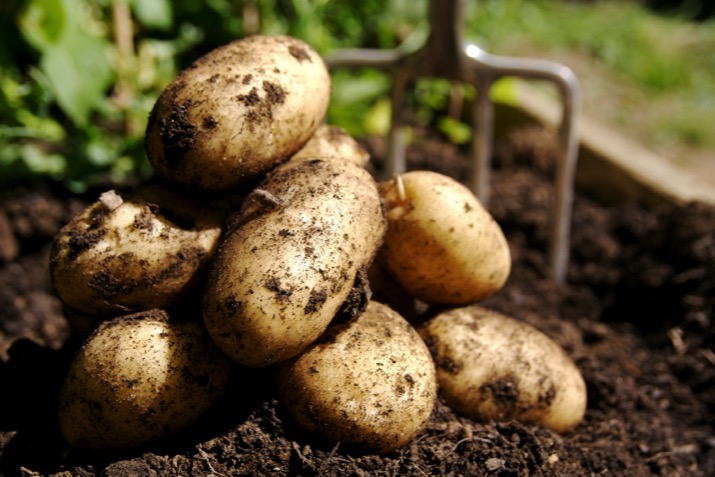 When it comes to comfort food, potatoes lead the vegetable pack. They're also the number one vegetable crop in the United States, according to the USDA, so it may not be surprising that the average American consumes almost 125 pounds of spuds each year.

Despite a little bad press—it was once thought poisonous and to cause leprosy—the potato has long been an important food staple.  The Peruvian Incas were the earliest cultivators; they grew potatoes beginning around 2,000 BC. And the Irish suffered so tragically from the Potato Famine—in which a blight ruined most of the potato crop in 1845— because the potato had become such a staple food source.

Satisfying and budget-friendly, potatoes are also nutritious. They're high in fiber and a very good source of vitamin C and potassium; in fact, they have more potassium per serving than bananas. They're a good source of vitamin B6, and they provide minerals such as thiamine, riboflavin, folate, magnesium, phosphorous, iron and zinc. They also contain a variety of phytonutrients, such as carotenoids and flavonoids. Much of a potato's nutrition is contained in the skin, so consider eating potatoes "with their jackets on."

There are about 100 varieties of potatoes of various sizes, shapes, colors, starch content and flavor. Here are the main categories:

Russet or Idaho potatoes are high in starch and low in moisture. They're also called baking potatoes, and they're the most widely used potato in the United States. Their hardy skin is light to medium brown, and the mild flesh is white to pale yellow. They make perfect baked potatoes and fluffy mashed potatoes. Examples include Burbank, Norkotah, Ranger, Shepody, Utamilla, Ranger Russet and German Butterball.

White potatoes are similar to russets but with a smaller, rounder shape, less starch and thinner skin. They hold their shape well after cooking, so they're good for grilling and potato salads. They can be boiled, steamed or roasted, and they make good mashed and au gratin potatoes. Examples include Atlantic, Katahdin, Norwis, Reba and Superior. Long white potatoes are oval-shaped whites. These include Kennebec, White Rose, Cascade and Cal White.

Yellow potatoes are considered an "all-purpose" potato. They're a little smaller than russet potatoes with a lower starch content. They're light tan to golden skinned with a yellowish flesh. Rich and buttery, they can be mashed, steamed, boiled, baked, roasted or fried. Yukon Gold, German Butterball, Sierra Gold and Yellow Finn are examples.

Purple/blue potatoes are perfect for visual appeal in a salad or side dish. Small to medium size, these oblong potatoes are purple or reddish/blue with blue, pink, lavender or white flesh. They have an earthy, nutty flavor. With a medium starch content, they can be successfully steamed, baked, boiled or mashed. Purple Peruvian, All Blue, Russian Blue and Purple Majesty are examples.

Fingerling potatoes are small (about two to three inches long) and finger shaped. They're available with different colored skin and flesh (red, yellow, purple, white). Their nutty taste is delicious baked, boiled or roasted and served in salads or as a side dish. Examples include French Fingerling, Russian Banana and Austrian Crescent.

New potatoes are simply small, immature potatoes. They tend to have very thin skins and are sweeter than larger potatoes. They're typically served boiled and buttered.

The versatile potato can serve as an appetizer, a main dish or a side and in soups, stews and salads. We even devote entire bars to topping it. (Be sure to include the topping in this recipe for Patatas Bravas with Lemon Alioli in your next spread.)

Potato salad is the proverbial picnic side, of course. Shake yours up a bit by using red skinned potatoes and a pesto dressing, as in this Roasted Potato Salad with Lemon Pesto Vinaigrette. Or combine them with an unexpected vegetable, as in these Rosemary Roasted Potatoes with Artichokes or an unexpected legume, in Potato and Chickpea Salad.

Potatoes have been incorporated in to cuisines around the world. Saag Aloo is a popular Indian dish highlighting potatoes and spinach. And these Masala Potato Appetizers consist of Indian spiced spuds on a baguette. The addition of shredded cabbage and onions transforms simple mashed potatoes into a main dish in this Irish Bangers and Mash recipe.

For an elegant potato main, be sure to try Potato-Kale Tart, which pairs potatoes with the robust flavors of kale and Gruyère.

The addition of potatoes to soup makes it hearty, comforting fare by definition. Two examples: Potato Leek Soup with Gruyere and Baked Potato Soup with Bacon. (The baked potato soup recipe includes directions for broiling the potato skins as a garnish—directions that might come in handy anytime you have potato peelings on hand.)

One cooking note: Avoid cooking your potatoes in aluminum or iron pots; these can cause the potatoes to discolor.

While the ever-popular russets are harvested August through October, other potato varieties are harvested at other times, so you'll find potatoes year round in the produce section.

Choose firm, relatively smooth potatoes that are free of decay. There should be no moisture or dry rot and no sprouting. (Especially look for signs of moisture if you're buying potatoes in plastic bags instead of individually.) Avoid potatoes with any green coloration; this signals that the potato contains solanine, a toxic compound naturally produced by potatoes to defend against insects, disease and predators. Eating green potatoes can cause digestive discomfort.

If you plan to cook whole potatoes together (baking, for example), choose potatoes that are about the same size, so they'll be ready at the same time.

Store potatoes in a cool, dry, dark cabinet with some air flow. Potatoes will sprout at higher temperatures. Don't store them near onions (the gases each emit will degrade the other), and don't put them in the refrigerator, or the starch will turn to sugar, changing the taste.

When ready to use, rinse potatoes well, scrub to remove dirt (but try not to break the skin) and cut off any sprouts.

Everyone Saves on Co+op Deals!
END_OF_DOCUMENT_TOKEN_TO_BE_REPLACED