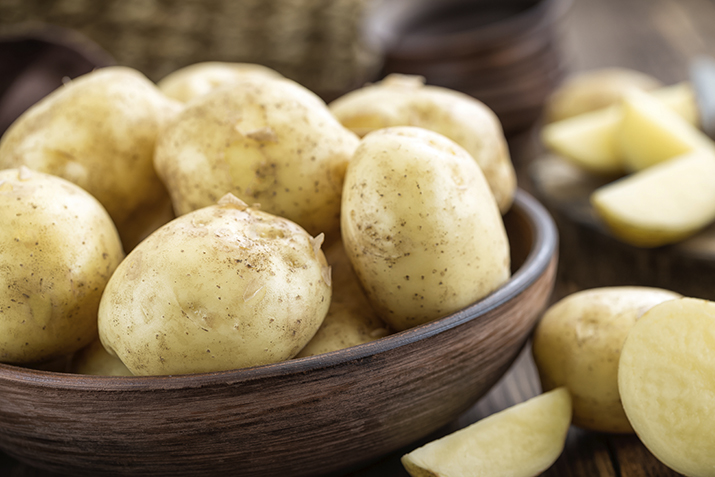 In the vegetable world, new potatoes are a prime example of why bigger isn't always better. Prized for their sweet, earthy flavor and crisp, waxy texture, potatoes of any variety, when dug up young during the spring and early summer, are called new potatoes. They're sweet because they're picked before they've fully converted their sugar into starch.

Originally from the high altitudes of South America, Europeans first learned of the potato in the 1500s, but it took more than a century for them to cultivate it and incorporate it into their diet. It probably didn't help that they first mistook it for a truffle, which also grows underground and can be similarly shaped. Likewise, it was introduced to India in the early 1600s and—while it's now a staple—had a slow start gaining popularity. Irish immigrants introduced the potato to North America in the early 1700s.

New potatoes are low in sodium and high in complex carbohydrates and vitamins C and B6. They're a good source of dietary fiber and magnesium.

There are about 5,000 potato varieties worldwide. Any immature potatoes may be sold as "new potatoes," including red, yellow and white varieties. New potatoes will be small and roundish, with thin skin.

Boiled, roasted or steamed, new potatoes are a culinary canvas for all types of cookery. Simply add butter and mint—or another favorite herb or spice, like dill, rosemary, thyme, parsley or chives—for an easy, pleasing side dish. Or try combining them with other vegetables. Rosemary Roasted Potatoes with Artichokes are a good example of the potential!

Add new potatoes to any soup or stew. Though small, they're hearty enough for seafood and meats, like those in this flavorful Spanish Pork and Chorizo Stew with Olives.

New potatoes are perfect for potato salads. German New Potato Salad celebrates the arrival of new red-skinned potatoes by partnering them with bacon and a hot, whole grain mustard dressing. Any new potatoes would be stellar in New Potato and Green Bean Salad in a Spice Blend Vinaigrette, where they're combined with feta and roasted tomatoes and spiced with a lively dressing.

The size of new potatoes makes them ideal for tapas, like Patatas Bravas with Lemon Alioli, where they're seasoned with paprika and topped with a creamy alioli sauce.

New potatoes are sometimes available year round, though they're at their peak in spring to early summer.

Choose firm, blemish-free potatoes. Avoid potatoes with wrinkled, sprouted or cracked skin. Some missing skin is okay, though. Avoid any potatoes (regular or new) with green areas. Exposure to light causes the alkaloid solanine to turn them green, which can be bitter and toxic. If your potatoes have a green area, cut or scrape it off.

Unlike their grown-up relatives, new potatoes should be refrigerated and have a shelf life of only about a week or so. If kept too long at warm temperatures, they'll quickly sprout and shrivel. Wash new potatoes just before using.

Everyone Saves on Co+op Deals!
END_OF_DOCUMENT_TOKEN_TO_BE_REPLACED