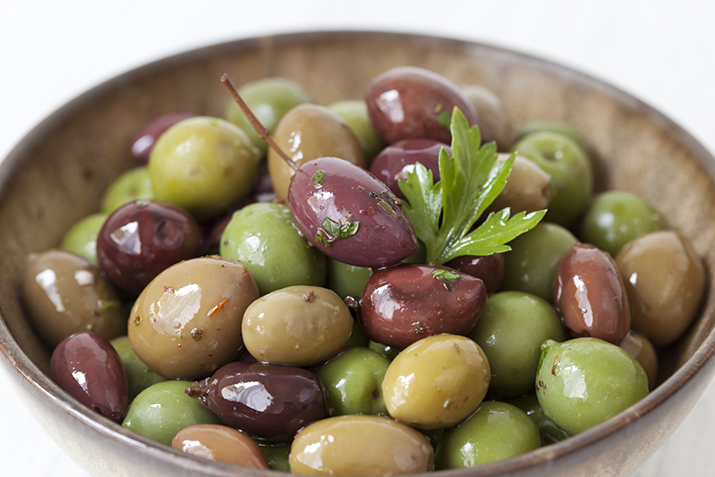 Green or black? Nearly everyone has a preference when it comes to olives! But did you know that there's more than just color to differentiate the many varieties? There's the mild and nutty French Picholine, for example, and the strong, sweet, Spanish Picual. There are olives from Africa and Israel, Egypt and Greece. Of course, there's also the California Mission olive and a host of Italian olives used making for distinctive olive oils. Even if you're not interested in becoming an olive (or olive oil) connoisseur, you may enjoy exploring the varied tastes of olives­—whether you're slicing a handful onto your pizza or dropping one into your martini.

Olives are the fruit of a small evergreen tree or shrub, related to lilac, jasmine, forsythia and ash. One olive tree in Portugal has been carbon dated to 2,000 years old. Olive trees prefer hot weather, and they tolerate drought, thanks to their extensive root system. They're native to the eastern Mediterranean, Asia and Africa. Cultivation began in Mexico, Peru, Chile and Argentina in the 16th century. California—where cultivation began in the 18th century—is the center of olive production in the United States today.

Long a symbol of peace, glory, abundance, fertility, power and purity, olive leaves were used to crown the winners of ancient games and wars, and olive oil was the eternal flame of the original Olympic games.

A good source of vitamin E and monounsaturated fats, polyphenols and flavonoids, olives also provide some fiber, iron and copper.

Fresh olives are hard and very bitter, not eaten until after they've been processed to reduce the bitterness. This usually involves a curing process in which they're soaked in a brine.

Olives are available whole or pitted, fresh or in jars. The flavor of olives differs with varieties. Among thousands of cultivars, you'll find mild, strong, sour, pungent, smoky, bitter, salty and acidic olives. Just some of the options to explore:

Olives are a favorite pizza topping, of course. Try Kalamata olives with tangy artichokes on this Mushroom Artichoke Flatbread Pizza. Or use olives to top fresh bread, like Focaccia with Olives and Rosemary. Olives are a natural on salads and with pasta, too. Artichoke Parmesan Pasta combines Kalamata olives, capers, fresh basil and artichoke hearts with zesty lemon juice for a fresh pasta dish.

Tuscan Tuna Nicoise is an elegant version of a classic dish, featuring artichokes, olives, fresh herbs and bright citrus flavors. Olives partner perfectly with grilled tuna, too. Or combine them with garlic and cinnamon to create a spicy tomato sauce for serving over flaky white fish, as in this Mexican Halibut Veracruz.

The flavor of olives is strong enough to shine alongside meats. Spanish Pork and Chorizo Stew with Olives is a rustic stew that's easy to put together and adaptable to whatever fresh, local foods are available. Chicken and seafood are also enhanced by olives.

Liquid in jars of olives should be clear, not cloudy.

Store olives in their brine or liquid in jars or containers in the refrigerator. Retrieve them with a clean utensil, not your fingers (or you may contaminate the liquid).

Everyone Saves on Co+op Deals!
END_OF_DOCUMENT_TOKEN_TO_BE_REPLACED