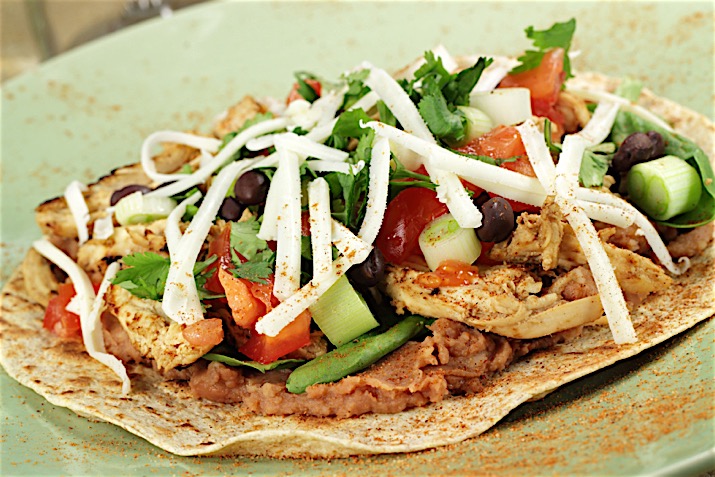 Monterey Jack cheese is an American original. First made by Spanish missionaries in what was to become California, Monterey Jack began with a simple name, queso del pais (or “country cheese”). Eventually it came to be named after California land baron David Jack, who was the first to mass-produce and market the cheese in the 1880s. He branded the large wheels of cheese with both the location of his dairies, Monterey, and his last name, Jack, and Monterey Jack cheese was born.

Today Monterey Jack (or just “Jack cheese” as it’s often called) is made by over a third of the creameries in California, as well as numerous dairies across the country and around the world. It is an extremely popular cheese due to its rich and creamy, semi-firm texture and smooth, tangy finish. It works well for a variety of uses, as it melts beautifully, and also has enough flavor to stand on its own on a cheese tray.

The mild, tangy flavor of this cheese has inspired a considerable amount of creative experimentation. Probably the best-known flavored Jack cheese is pepper Jack, with chopped jalapeño peppers blended in with the cheese curd before it is pressed into molds and aged. This produces a spicy, flavorful cheese that adds a Southwestern flair to your favorite foods. Other less-common varieties include Jack cheese flavored with pesto, habanero peppers, salsa, garlic or dill. Monterey Jack is sometimes blended with other cheeses, too; when combined with Wisconsin’s Colby cheese it becomes a distinctive white and orange mottled cheese called Colby Jack (or Cojack).

Since it melts beautifully, Monterey Jack is a great choice for grilled cheese sandwiches and quesadillas, like these Kid-Friendly Cheesy Black Bean Quesadillas (which, by the way, are popular with adults, too!). Melt slices of Monterey Jack over grilled veggie burgers, hamburgers or chicken filets and top with guacamole, tomato and red onion to make a BBQ sandwich that is a cut above the usual.

Monterey Jack also complements eggs perfectly. Tuck some into a tasty omelet with sundried tomatoes, spinach and basil for a delightful quick brunch, or try this Asparagus Strata with Zesty Mediterranean Garnish and serve it for a crowd or on a special occasion. For a delicious, on-the-go breakfast that takes mere minutes, top a whole wheat tortilla with a scrambled egg and a sprinkle of Monterey Jack cheese, roll it up and you’re good to go!

To enjoy it on a cheese plate, pair Monterey Jack with roasted vegetables like mushrooms, zucchini or asparagus or soft, sweet fruits like figs, plums, and peaches. It is a great accompaniment to roasted almonds, olives, and pickled onions, too.

Find Monterey Jack in the cheese department of your local co-op, and ask staff to point out any unique regional varieties or flavors (like chipotle Jack in the Southwest or cranberry Jack in Wisconsin). Monterey Jack will keep 3-4 weeks when tightly wrapped and stored in your refrigerator, but odds are this versatile cheese won’t be around long enough for you to test that out!

Everyone Saves on Co+op Deals!
END_OF_DOCUMENT_TOKEN_TO_BE_REPLACED