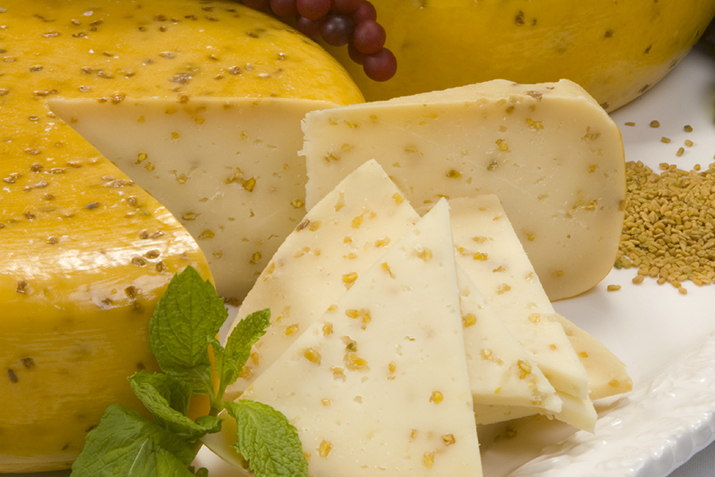 Holland knows it has a good thing going—more than half of the cheese it produces is creamy, sweet, perfectly balanced Gouda. While most Goudas are not origin protected, Gouda is named after a city in Holland, where cheesemakers from surrounding towns still come to have their cheese weighed, priced and sold at a cheese market.

Popular around the world, Gouda is now produced in Australia, New Zealand, Israel, Brazil, Sweden, Norway and the United States. In fact, the Gouda produced in Wisconsin and New York is very similar to the authentic Dutch Gouda.

A semi-firm, washed curd cheese, Gouda is in the same family as Edam and Havarti. After washing, the cheese is pressed into circular molds, traditionally 10 to 12 pounds each, then soaked in salty brine before aging. Gouda is aged from several weeks to more than seven years, developing a caramel sweetness as it ages. While usually made from cow's milk, there is a goat's milk Gouda, also from Holland. It has a tangier flavor than cow's milk Gouda.

The smooth, creamy texture of Gouda is due to its high fat content. It is white to creamy yellow, sometimes with small holes.

Gouda can be mild or strong, depending on its age. Older Goudas are saltier, more pungent and harder than younger Goudas. Baby Gouda, which is the mildest, creamiest of the Goudas, comes in small rounds of one pound or less. Gouda also comes flavored (with peppers, herbs, etc.) or smoked. Noord-Hollandse Gouda is the one type of Gouda that has a protected designation origin; the milk used to make this cheese must come from the province of Nord-Holland. It's typically a bit less salty than other Goudas.

An excellent melter, Gouda is a stellar choice for grilled cheese (especially good with dark breads), burgers, omelets and casseroles. Use it to liven up a classic beer cheese soup or fondue. Gouda pairs beautifully with other cheeses, like the cheddar and jack in this Three Cheese Fondue.

Gouda is also distinctive enough to serve simply with crackers or on a cheese or antipasto platter, along with Garlic Poached Mushrooms with Fresh Basil. It's even perfectly suitable for a dessert platter; nestle it among pears, apples and/or cherries. Serve with an ale or porter beer, a white burgundy or a red wine. By the way, Gouda is sometimes used at wine tastings as a palate cleanser.

When shopping for Gouda cheese, the color of the wax coating can sometimes tell you a little bit about what’s inside. Young Goudas (aged between one and six months) are usually wrapped in red or yellow wax, while mature Goudas (which can be aged for as long as seven years) generally sport a more dignified black coating and are more pungent. Goat cheese Goudas traditionally are wrapped in white wax.

Read our article on Creating the Perfect Cheese Plate.

Everyone Saves on Co+op Deals!
END_OF_DOCUMENT_TOKEN_TO_BE_REPLACED