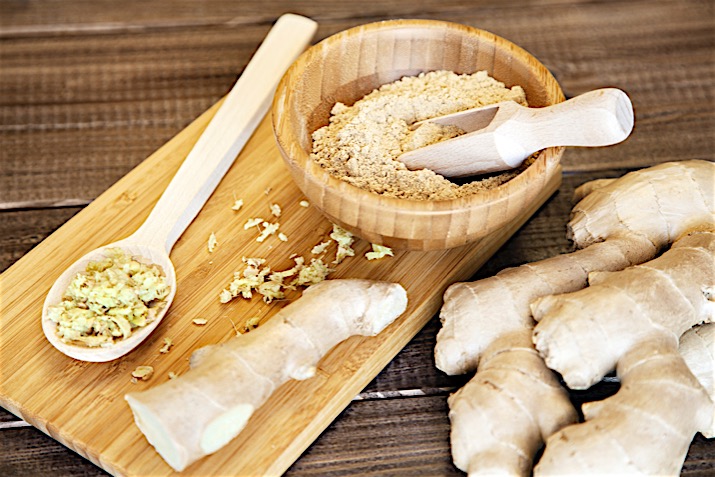 We call it ginger root, but it's actually not a root but a rhizome—an underground stem. One of the oldest spices cultivated, ginger was used in ancient times to flavor and preserve food and to treat digestive problems. To settle an upset stomach, the Greeks ate it wrapped in bread—the precursor, perhaps, of gingerbread?

Ginger's popularity—second only to pepper in the 14th century when its antiseptic properties and sulfur content were considered an antidote to the Plague—spanned Asia, India and Europe for thousands of years. Major producers of ginger today are India, China, Nepal, Nigeria and Thailand.

The knotted, thick rhizome grows horizontally underground and about a foot up from the ground, sending out long, ribbed green leaves and white/yellow/green flowers. The dug-up stems are washed and sun-dried to produce whole ginger roots or "hands."

Ginger is a good source of vitamin C, magnesium, potassium, copper and manganese. It's also widely studied for its medicinal benefits. For example, the University of Maryland Medical Center points to its use to treat nausea and vomiting due to a number of causes, as well as to allay the pain of osteoarthritis and possibly help treat heart disease. Of course, it's also delicious in all sorts of dishes.

Ginger root is available dried or fresh. The fresh rhizomes—considered best for maximum flavor and aroma—are called green ginger (though the flesh is actually ivory to pale yellow), and they're used in cooking or as a condiment. Its skin can be scraped off, and the ginger can then be sliced, grated, chopped, or pounded.

Dried ginger is dehydrated either with or without its skin. White ginger has been peeled before drying. Black ginger is unpeeled roots that are scalded before drying, producing a darker root.

Crystallized ginger is made from young, nonfibrous, fresh roots that are processed in a sweetened solution.

Galangal, which is sometimes called blue ginger and is used in several Asian cuisines, is a related plant; it has a milder taste than ginger.

The flavor and aroma of ginger depend in part on the timing of its harvest. Ginger that's harvested early is sweeter and more tender than ginger harvested later, which becomes both spicier and more fibrous. Younger ginger will have a thinner, lighter skin than older ginger, which will have browner, thicker skin.

Ginger's warmly pungent, distinct flavor shines in both sweet and savory dishes. You'll find it in many cuisines around the world, from Asian stir fries and European soups to English jams.

Ginger can be the main flavor (think gingerbread, gingersnaps, ginger ale—or even a gingery dipping sauce), or it can enhance other flavors.

Sauces, dressings and dips all perk up with the addition of ginger. For a simple dipping or marinating sauce, add minced ginger to soy sauce. For a salad dressing upgrade, stir a bit of minced ginger to an otherwise plain vinaigrette. Or combine it with red miso and tahini, in this colorful Kale Salad with Ginger Miso Dressing, where its flavor stands up to robust greens. You might want to add a ginger sauce to your basic cooking repertoire, too. This Ginger Beurre Blanc Sauce would nicely flavor any seafood or chicken, for starters.

Ginger is also versatile in main and side dishes. Add it to grain dishes and mashed sweet potatoes. Central to many stir fry recipes, it enhances beef, chicken, or veggies. In this Grilled Tofu with Cilantro Ginger Pesto, ginger combines with cilantro, another distinctive flavor.

Apples, pears and other fruit are delicious when seasoned with ginger. Just sprinkle some minced ginger on top of the fruit before baking, for example, or cook the fruit in gingered butter until softened, as in this stellar Brined Pork Chops with Gingered Apples recipe.

Try your hand at making your own Pickled Ginger, too, for cleansing the palate between sushi courses. This version is easy to make and, unlike many commercial varieties, uses no food dyes.

Dried and ground ginger performs well in desserts. Include it with other sweet, warm spices in any cookie, cake, or quick bread recipe, and be sure to add it to pumpkin and apple pie fillings. Or highlight its flavor, as in these Gingerbread Cupcakes with Cinnamon Cream Cheese Frosting, where it combines with warm cloves and black pepper for spicy sweetness.

Ginger lovers will appreciate the sweet spicy bite of crystallized ginger in carrot and pound cakes, or stirred into cream cheese for spreading on fruit bread. You can also simply serve the tasty little chunks alongside curried dishes.

Fresh ginger root is available year round. Avoid roots that are discolored or moldy or completely shriveled up—which would mean the piece is past its prime. Look for skin that's smooth and almost translucent. When you break off a knob, it should be firm and crisp and smell fresh and spicy.

Store fresh ginger in a cool, dry place. It will keep in the refrigerator, in a paper towel or plastic wrap, for about a week, and it will freeze for up to three months. For long-term storage, some cooks like to peel and cover the root with sherry wine before refrigeration. Stored this way, the root will stay fresh for up to six months.

No need to go gingerly; just pick up that funny looking ginger rhizome at your co-op, knowing you'll find plenty of delectable uses for it in the kitchen.

Everyone Saves on Co+op Deals!
END_OF_DOCUMENT_TOKEN_TO_BE_REPLACED