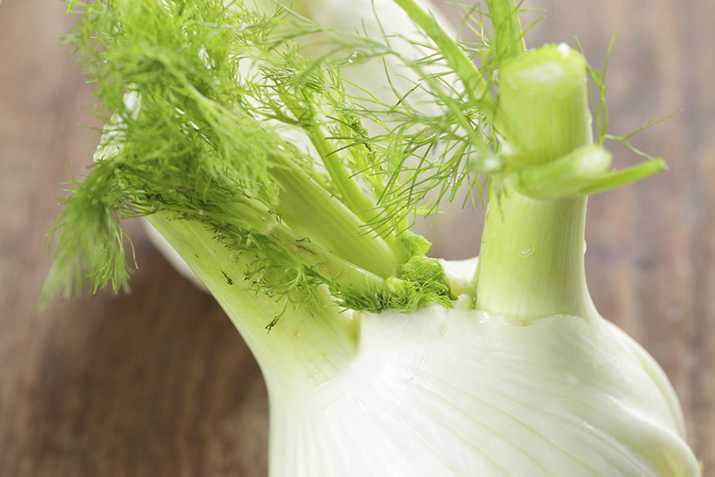 An aromatic, beautiful plant, fennel produces leaves, stalks, bulbs and seeds that are all edible. Its slightly sweet flavor has a bit of a bite, similar to licorice and anise, and its texture is crunchy, like celery.

Indigenous to the Mediterranean and preferring hot, dry climates, fennel will nevertheless grow throughout many parts of the world. It's become naturalized in pastures, roadsides and other areas in northern Europe, the United States, southern Canada, Asia and Australia. Commercial production occurs in the United States (especially California), France, India and Russia.

The plant belongs to the Umbellifereae family, along with parsley, carrots, dill and coriander. In addition to common or sweet fennel—a perennial plant that reaches up to five feet—you might also come across Florence fennel, which is an annual that reaches only a few feet, tops.

Also called bulb fennel or finocchio, Florence fennel has a larger leaf stalk growing from a swollen, bulb-like base, similar to celery root; this is the variety we use as a vegetable. It's smaller than the wild variety of fennel.

Popular in Mediterranean cooking—and Italian cuisine in particular—fennel has an affinity for fish and seafood. Pacific Halibut with Fennel and Grapefruit Salad features a flavorful salad of fennel bulb, red grapefruit and fresh thyme, served with poached halibut. Fennel contributes to the flavorful crust in Wild Salmon Fillets with Basil and Hazelnut Crust.

Its anise-like, fresh taste and crunchy texture is also a lovely substitute for celery in soups and stews and a tasty addition to omelets, risottos and casseroles.

Roasting fennel brings out its sweetness—try roasting a bulb of it in this Mediterranean Roasted Vegetables recipe.

Caramelizing fennel with onion in a white wine sauce creates the most luscious Caramelized Onion and Fennel Tarts.

The flavor mellows with cooking, so don't shy away from fennel at the outset—saute, bake, braise, roast or grill and enjoy!

Fennel is available from the fall through early spring.

Choose fennel with clean, firm, pale green or whitish bulbs. Avoid fennel with bruising, splitting or spotting. Choose small, heavy bulbs. The stalks should be crisp, with bright green feathery fronds, and they should be fairly straight—not splayed out too much. The plant should have a fragrant aroma.

Store fennel in the refrigerator crisper for up to four days; it will lose flavor as it ages.

Everyone Saves on Co+op Deals!
END_OF_DOCUMENT_TOKEN_TO_BE_REPLACED