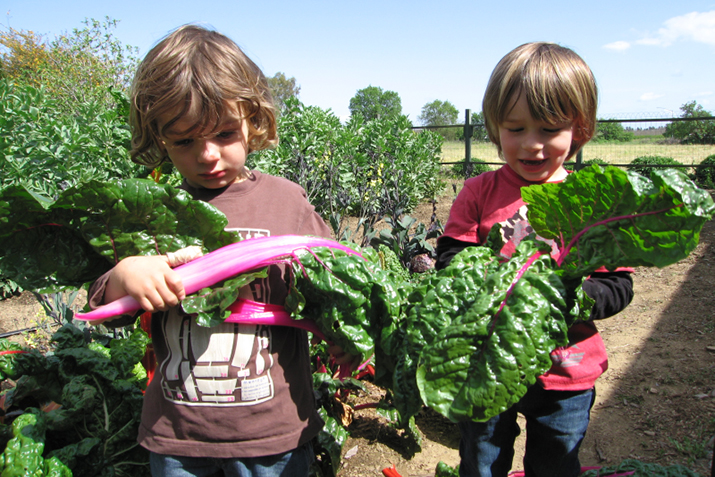 Responding to the urgency in his voice, I hurried to the garden and discovered Oscar standing over a giant zucchini. Hidden by the leaves and left too long on the vine, it was almost two feet long. “Can we pick it? Can you get it for us?” I cut if off the vine with my kitchen knife, and Oscar’s twin, Raphael grabbed it and tried to put in his basket. The squash was way too big to fit, so he wrapped his little 5-year old arms around it and headed out of the garden toward the kitchen, staggering slightly, calling "come on" to his brother. Oscar grabbed his basket, with a few early crop tomatoes he had picked and a big red onion. “Can we have our squash for dinner? Can I help cook it?” Raphael asked as he heaved his garden bounty onto the kitchen table. “Me too,” chimed in Oscar, “and let’s eat the tomatoes too, and the onion. I like onions a lot.” That night the boys helped me make sauteed zucchini with onion and fresh thyme, which they heartily ate, along with pasta and baked chicken and a salad that included the cherry tomatoes and some chopped red onion. Before cooking, they picked lemons from the trees outside the kitchen door and squeezed juice for lemonade.

My little hunter-gathers have mastered the concept of where food comes from, and I like to think it was with my help. From the moment they were old enough to walk, the first thing they did on arriving at our house was to run out to the garden to see what was new, what had changed there since their previous visit, what Papa Jim had planted. For example, last June, the strawberries that had been green when the boys came in April had turned to red. “Raffi, Raffi, come see. The strawberries are red!” The strawberries were quickly picked and eaten on the spot.

When they travel back to San Francisco from our house they surround themselves with their gathered garden snacks for the hour-plus drive to the city. In spring, it’s fresh asparagus spears, cups of raw fava beans and kumquats. In summer, it’s cherry tomatoes, slices of sweet red pepper, and green beans—summer’s stone fruits are too messy to eat in the car. In fall, they travel with grapes from the arbor and slices of persimmon. It warms my heart to see them drive away, waving their asparagus stalks.

The boys’ mother grew up cooking from the garden, and, like Oscar and Raphael, is drawn to whatever I have growing almost by instinct, inspecting, picking, and gathering up food. I am sure she’s passed that gardener-gatherer gene to her children, just as I passed it to her, with encouragement, of course. Now she’s getting ready to put in a vegetable garden in her San Francisco back yard so here boys can gather their food every day—and help grow it and cook it alongside her.

The gardening-gathering gene exists in all of us, and, I suspect, so does a gene for appreciating fresh picked local food. It can easily be awakened by bite of a fresh cherry tomato or the first salad greens of spring. And while having a garden is wonderful, a sunny back stoop and a few pots is enough to grow any number of fresh vegetables and herbs. Of course, the farmers' market and your local food co-op are great sources for a wide variety of garden fresh produce as well. It’s all there and available to old and young alike—it’s simply a matter of someone encouraging that taste for fresh picked local food—and what better way to do that than with summer’s abundant produce?

Everyone Saves on Co+op Deals!
END_OF_DOCUMENT_TOKEN_TO_BE_REPLACED