Succession in the Garden 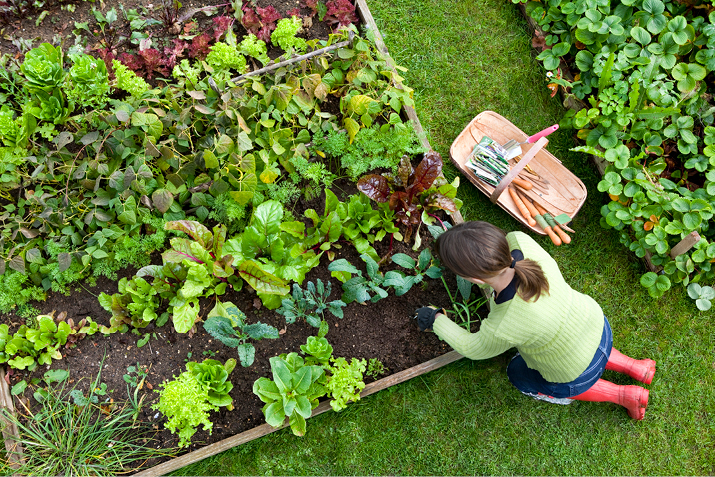 Spring in the garden is a dangerous time. The temptation is to go out on those warm, sunny days and plant 'til you drop. Not only is that strenuous on your body and mind, it can also lead to the proverbial glut of food in a few months. Many gardeners, myself included, have experienced our plantings of lettuce and beans maturing all at once, leaving us with a tiresome "greens and beans" diet. Of course, we'll eat it. We couldn't waste all that produce since it took so much time and energy to grow it!

A better solution is to plan out your annual edible garden so crops mature in a more orderly fashion. It's not hard to do. Succession planting just requires a little knowledge of the type of plants you're growing, a little planning to have room for them to grow, and the patience to plant each crop in turn. Also, other commonsense gardening techniques, such as crop rotation and interplanting, can help maximize growing space and help your plants avoid many soil-borne diseases and insects. Here are some tips to get you started in the right direction and remind you to keep planting right through the summer and fall.

To succession plant, start in spring with cool-season crops that can be planted early, such as lettuce, spinach, peas, broccoli, greens, bok choy, carrots, radishes, and beets. For example, instead of planting one long row or bed of lettuce, consider planting a short, 2-foot-long row or bed. Two weeks later, sow another 2-foot-long row, and so on until the weather gets too warm for lettuce. Since the plants mature in one to two months you'll get a continuous harvest of lettuce.

Depending on the weather, later plantings can sometimes catch up to earlier plantings. But since many lettuce varieties can be picked at a young stage before heads form, you can harvest earlier than normal to keep the staggering on track.

For warm weather crops, such as bush beans, summer squash, or cucumbers, follow the same planting pattern. Plant one bed after the last frost date, and another three or four weeks later. Since these crops take at least 60 days to mature, in regions with short growing seasons you may have time for just two successive crops before the weather gets too cold.

As late summer weather cools, you can start planting lettuce again for a fall or winter crop, depending on your location. Because the amount of daylight decreases in autumn, plants grow more slowly in fall than in spring, so allow more time for them to mature. The other key to succession planting is leaving room to plant. The temptation is to plant everything all at once and fill the garden. It's important to plan for subsequent plantings. Cover unused beds with straw or other mulch to deter weeds.

Pull out old crops as soon as they finish producing. Don't let those peas hang on just because there are a few fruits on the vine. Pull old lettuce and spinach plants as soon as they show signs of bolting. By being a little hard-hearted, you'll create lots of room to grow a second and third crop. It takes a little planning in advance, but you'll be amazed at where you can tuck in a few broccoli or bok choy plants or a small row of beans.

While it's fine to insert plants wherever you have space in your gardens, you should also pay attention to the history of what's planted where. There are many soil-borne diseases and insects that specialize in attacking certain families of crops. For example, verticillium wilt loves the tomato family, including peppers, potatoes, and eggplants. If you plant the same family of plants in the same location year after year, you're bound to get a buildup of soil diseases and insects that attack those plants. The solution is to rotate your crops. Crop rotation requires recording where plants were grown year after year. Then try not to plant the same family of plants in the same location for 3 years. This should be enough time for most disease and insect populations to die down. Some common edible plant families are listed below:

Interplanting is another way to maximize space. While succession planting takes advantage of staggered planting and harvesting, interplanting takes advantage of the different growth cycles and forms of plants. Use the free space under and around slow-growing crops to plant fast-maturing vegetables. For example, plant radishes around tomatoes, squash, or broccoli plants. The radishes will mature before the larger plants shade them out. In warm summer areas, this technique has the added bonus of shading the plants from the harsh summer sun so they stay healthier.

Interplanting also means planting crops that are compatible. For example, plant nitrogen-hungry crops, such as sweet corn and greens, in the space near legumes, such as beans and peas. Legumes "fix" atmospheric nitrogen and make it available to nearby plants via their roots.

The concept of companion planting also matches plants based on their mutual likes and dislikes of each other. Some plants repel insects that would otherwise plague the companion. Some plants seem to enhance the growth of certain other plants. Although, not scientifically proven, some gardeners swear by companion planting.

Here are some companion plant combinations to try:

By interplanting, succession planting, and rotating crops, you can grow more food in less space and have healthier soil and plants. Plus, it gives you one more reason to putter in the garden all summer long, as if you needed one

Everyone Saves on Co+op Deals!
END_OF_DOCUMENT_TOKEN_TO_BE_REPLACED