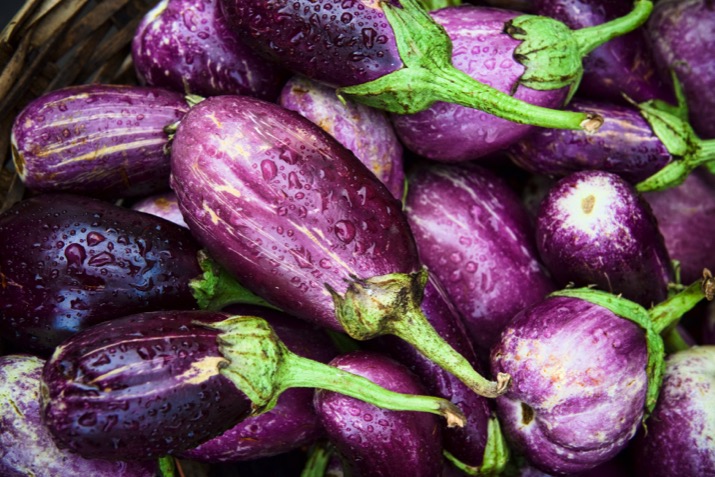 Eggplant, or aubergine as the French and English like to call it, was first cultivated in China in the 5th century. When it was introduced to Italy in the 14th century, it was used as a decorative plant, and when brought to the Western hemisphere by European explorers, it was reputed to cause insanity and disease, so like the tomato (once thought to be poisonous), it took a while for eggplant to catch on as a culinary delight. When less bitter varieties were introduced in the 18th century, eggplant truly found its place in the kitchen.

Eggplant is a very good source of dietary fiber, and—according to the USDA—it also provides potassium, manganese, copper and thiamin. It contains phytonutrients as well as vitamin B6, folate, magnesium and niacin.

Like tomatoes, sweet peppers and potatoes, eggplant belongs to the Nightshade family of vegetables. Most eggplants are dark, glossy purple, but you'll also find white, green, mauve and yellow varieties. In fact, the name “eggplant” comes from yellow and white European varieties that looked like goose or hen's eggs.

Season it with a curry blend and add to a winter stew—its dense texture makes it a great meat substitute, including on the grill. It's an expected ingredient in classic, colorful Vegetable Ratatouille. Include it in stir-fries and, of course, celebrate it with Baba Ghanouj and eggplant Parmesan.

August through October is peak season for eggplant in most areas. The ideal eggplant should be firm and heavy for its size, and the color should be vivid, with smooth and shiny skin. Avoid waxed eggplant and those with bruises, scars or discoloration. The stem and cap should be bright green. Smaller eggplants are generally less bitter than larger ones.

Gently press the skin with your thumb. If it bounces back, it's ripe, but if an indentation remains, it's not.

Store uncut and unwashed eggplant in the refrigerator crisper. Use it within a day or two because it will become more bitter with age. Eggplant perishes quickly once cut, so try to purchase the size you need. But if you do wind up with some leftover, there's no shortage of delicious options for using it up quickly!

Everyone Saves on Co+op Deals!
END_OF_DOCUMENT_TOKEN_TO_BE_REPLACED