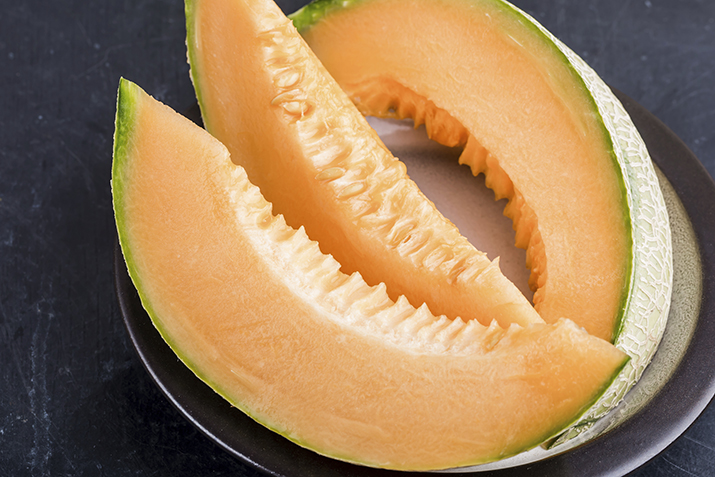 A smile-shaped slice of sweet, juicy cantaloupe is the perfect complement to a hot summer's day. Little wonder it's the most widely consumed melon in the United States.

The name cantaloupe comes from the Italian papal village of Cantaluppi, where it was cultivated around 1700 A.D. While introduced to the Americas in about the 16th century, cantaloupe wasn't grown commercially here until the late 19th century.

In the same family as the cucumber, pumpkin and squash, cantaloupe grows on trailing vines on the ground—though it will also climb a sturdy trellis. In some parts of the world, it's known as "rockmelon." Cantaloupe prefers warm or tropical regions and a long growing season. The main commercial growers today are the United States, Turkey, Iran, Mexico and Central America. In the U.S., the main producers are California, Arizona and Texas.

Cantaloupe is a type of muskmelon, and there are two varieties. One has a net-like, or reticulated appearance on the skin (the North American Cucumis melo reticulates), while the other has ribbed, light green skin (the European Cucumis melo cantalupensis). There's plenty of confusion and evolution surrounding the naming of melons, but today most people (and produce vendors) refer to any melon with an orange flesh as cantaloupe.

Varieties of cantaloupe include Athena (a sweet, popular melon that retains its firmness), Ariel (similar to Athena but larger), Aphrodite (an early-maturing variety), Dynamic (touted for its high sugar content), Gold Express (a good shipper with a tight seed cavity and dark orange flesh) and El Camino (a large fruit with medium-dark flesh and a tight cavity).

Soft, sweet and juicy, with a musky, slightly spicy aroma, cantaloupe is a stellar addition to both sweet and savory dishes, from breakfast through dinner. Cantaloupe Carpaccio features thinly sliced cantaloupe drizzled with vinaigrette, perfect as an appetizer.

Have you tried grilled cantaloupe? Marinate cantaloupe cubes in orange juice and a bit of sherry, then skewer along with seafood for the grill. Or thinly slice cantaloupe onto a Swiss and chicken panini.

With its lovely color and deep flavor, cantaloupe enlivens a wide array of warm weather salads. Carve it into balls (with a melon baller) and toss with other melons, jicama, berries and oranges—then top with yogurt or crème fraîche and a sprinkling of coconut, cardamom and cinnamon. Try an unexpected combination of fresh cantaloupe, spicy arugula, and salty prosciutto or feta cheese for lunch, or freshen up dinnertime with a cucumber and cantaloupe salad with ginger-chili-lime dressing. Combine cantaloupe, watermelon and mint for a refreshing Summer Melon Salad with Mint and Prosciutto.

The high water content of cantaloupe makes it a natural in beverages. Simply toss some cantaloupe in the blender with yogurt and vanilla for a refreshing smoothie. Try a new twist on the mojito cocktail by blending cantaloupe, mint and lime juice and serving over ice. Cantaloupe also makes a terrific base for a cold summer soup (serve with prosciutto and figs).

Cantaloupe is perfect for crafting fruit flowers. Be sure to get the kids in on the fun of making and eating this Fruit Flower Blossoms bouquet.

The peak season for cantaloupe is May to November.

For best flavor and nutrition, try to find a ripe fruit. Tap the cantaloupe with the palm of your hand—it should sound hollow and be heavy for its size. Look for a specimen with no bruises or overly soft spots. The blossom end (opposite the stem scar) should yield to moderate pressure.

Avoid cantaloupe with a stem, which would indicate that the fruit was harvested too soon. The rind should be yellow or cream colored, and there should be a mild melon aroma.

Everyone Saves on Co+op Deals!
END_OF_DOCUMENT_TOKEN_TO_BE_REPLACED