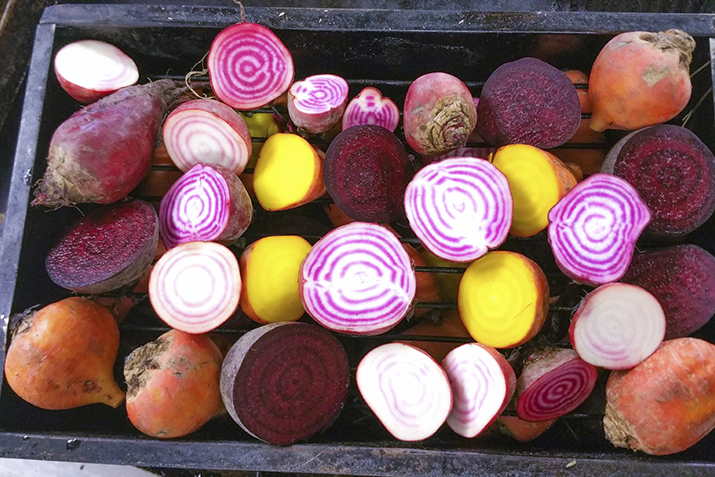 You may not think of beets as particularly sexy, but they've been considered an aphrodisiac in many cultures for centuries. The idea isn't completely fanciful; beets contain boron, which is related to the production of sex-related hormones. Beets are also thought to increase blood flow to the extremities, thanks to their nitric oxide content. The old superstition stating that a man and woman who eat from the same beetroot will fall in love could be a bit more tenuous, though.

Not quite as sexy but still just as much fun, beets can function as a litmus test indicator. When beet juice is added to an acidic solution, the solution will turn pink; when added to an alkali solution, it will turn yellow. That's because beet juice, in addition to being highly pigmented, is mildly acidic, so when added to an alkali substance, it prompts a molecular change in the pigment of the beet, changing its color. Now that's a fun experiment for a rainy day!

That pigment is called betalin, and it's what gives beets their red color. The red liquid that comes from the root can also be used for food coloring, red-colored mulches, and as a fabric, Easter egg and even hair dye.

Also known as table beet, garden beet, and blood turnip, beets are in the same family as spinach and are closely related to Swiss chard. Originally the root was used medicinally, and only the leaves were eaten as food. Discovered as a source of sugar in the 19th century, beets have one of the highest sugar contents in the vegetable world. The leading growers of commercial beets today are the United States, Russia, France, Poland and Germany.

Beets are red, right? Yes—the main variety of beets found in most grocers is the Red Ace. In addition to this common red variety, though, there are golden beets, white beets, Chioggia beets, and baby beets. Golden beets turn a golden orange when cooked and are slightly sweeter than red beets. Chioggia or Candy Cane beets have white and red concentric circles when the beet is cut in half. White sugar beets are grown in the U.S. for granulated sugar. And baby beets are both sweeter and faster cooking than larger beets.

Raw beets can be grated to add to slaws or to make a quick and easy relish (toss with chopped onion, vinegar and Dijon mustard)—beautiful as an accompaniment to corned beef or roast turkey. Grated beets make a lovely garnish, too.

Borscht, the traditional soup of Slavic countries, can be enjoyed cold or hot. This bright Chilled Summer Borscht is smooth and light, perfect for a summer's lunch, while Elizabeth Tatarinoff's Winter Borscht is hearty enough for the coldest days.

Roasting brings out the sweetness of beets. They can often be roasted in advance of serving, making them a versatile addition to salads. Or simply serve sliced, roasted beets with curly endive and goat cheese. Or create a beautiful side dish by topping roasted beets with a lively Salsa Verde.

Boiling is another option for cooking beets. And while they're perfectly delicious as a side with just a spritz of lemon and a dash of pepper, they also make scrumptious pickles, gratins or even a pizza topping. Combined with ricotta cheese, kale and walnuts, boiled baby beets make a stellar Kale and Beet Pita Pizza, for example.

Available almost year round, beets abound in the winter. Look for smooth, hard, uniformly round beets with no cuts, bruises, wet spots or shriveled skin. They should be bright and not too large (overgrown beets will be more fibrous). If they have their leaves, they should be bright green. If they have a large, hairy taproot, it means that the beet is probably overgrown and may be tough.

To store beets, trim the leaves two inches from the root and store them separately. While you'll want to eat the leaves as soon as possible, the roots will keep in the refrigerator—in a plastic or produce bag—for up to three weeks. Just before cooking, wash the beets gently. If necessary, peel the skin after cooking (peeling isn't always needed with smaller beets). To use the greens, wash them in running water to remove the dirt.

Everyone Saves on Co+op Deals!
END_OF_DOCUMENT_TOKEN_TO_BE_REPLACED