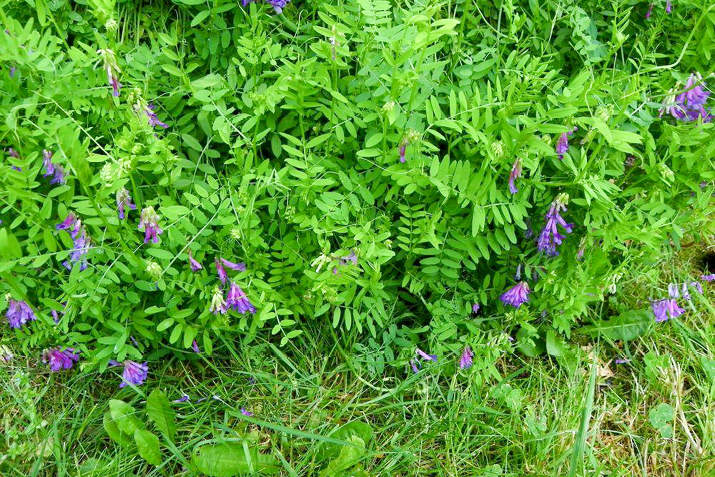 Cover crops have been enjoying a quiet rediscovery. Once considered only for farms and market gardens, they are now grown in all types of gardens. ″More home gardeners are growing them for reasons beyond adding organic matter to the soil. Cover crops control erosion, attract pollinating insects, break up heavy soils, and reduce weeds. Also, several varieties are newly available, and you don't need heavy-duty farm equipment to manage them,″ says Phil Radspinner, technical support manager at Peaceful Valley Farm Supply in Grass Valley, California.

When is a cover crop a green manure?

A cover crop is a general term for any plant grown to prevent erosion, to improve soil structure, and to maintain or build soil fertility. Sometimes, you'll see the term "green manure" used in gardening literature. These are crops used primarily to add nutrients to the soil and are tilled into soil when they're still green. The distinction between the terms isn't terribly important as long as you choose the best plant for the purpose you have in mind. In warm-winter climates, green manures overwinter; in other areas, they are tilled under in summer or fall.

Most gardeners know about the benefits of adding organic matter to the soil. Many, as I do, build the soil with annual applications of compost, manure, leaves, and grass clippings. However, in some areas, those forms of organic matter may be difficult to find or transport. Cover crops not only add large amounts of organic matter, but they provide other benefits as well. Let's look at some of them.

A primary reason to grow a cover crop is to increase the amount of organic matter in the soil. Additional organic matter improves the soil's structure, increases its water retention and drainage, and improves its aeration. It also provides necessary food for earthworms and microorganisms that increase biological activity in the soil. Increased biological activity in turn helps keep the soil healthy by enhancing decomposition; well-nourished beneficial microorganisms also compete better against disease-causing organisms.

Traditionally, an important reason to use a cover crop was to "cover" the soil during the winter. Hardy crops such as winter rye are particularly important in preventing erosion and topsoil loss, especially in areas with high winds and inconsistent snow cover.

Certain cover crops, such as bell beans and oilseed radishes, have aggressive taproots, sometimes reaching 3 feet deep, that help break up compacted soils. The taproots also "mine" nutrients such as calcium from deeper soil, and when the plant dies, the nutrients are released in the root zone for the next crop.

Legume cover crops such as hairy vetch and crimson clover-through a symbiotic relationship with the rhizobia bacteria on their roots-convert atmospheric nitrogen into a form they can use to grow. When the cover crop is tilled under, the nitrogen is released for the next crop. In contrast, cover crops such as phacelia absorb and accumulate excess levels of nitrogen and other nutrients already in the soil that may otherwise leach out and pollute ground water or nearby streams.

Some cover crops are good weed blockers. Broad-leaved cover crops such as buckwheat and sunn hemp shade and smother weeds with their vigorous growth, and others like winter rye grain release s that prevent weeds from germinating.

Cover crops such as crimson clover and mustard, if allowed to flower, attract bees and beneficial insects that help with pollination and insect control in the garden.

But not for every garden

Despite their many advantages, cover crops aren't always the ideal choice. Here are some considerations that may dissuade you from growing a cover crop.

To gain the most benefits, gardeners should incorporate overwintering cover crops into the soil at or before full bloom in spring. Some crops, such as hairy vetch, put on so much top growth that you must cut or mow them before you turn them under. These may be difficult to handle unless you have a powerful mower, tractor, or tiller. With that equipment, the tops can be cut and tilled under, used as mulch around plants, or composted. Gardeners without such machines find it easier to grow cover crops that aren't winter-hardy in their areas or those that produce less top growth and are easy to turn under by hand in spring. Cover crops that die over the winter, including oats and mustard in the Northeast, still protect soil somewhat with their root systems.

Cover crops must be turned under in spring at least two weeks before planting. That requirement may delay your usual planting time if you have a wet soil or a wet spring, or if you're growing cover crops that mature later. Furthermore, you may have to till a cover crop in early, losing some benefits of nitrogen fixing and organic matter. If the tilled-in crop hasn't decomposed by planting time, your plants may have a temporary nitrogen deficiency as microbes use soil nitrogen to break down the organic matter from the cover crop.

In dry areas, as in the Southwest, cover crops consume vital moisture from the soil, especially when they're getting established. In such situations, choose a crop such as barley that needs minimal water to germinate, grows well in dry soils, and is planted before annual rains in the area.

If you allow some cover crops (annual ryegrass is one) to go to seed, they can become weeds. To derive maximum benefits from the cover crop and to prevent reseeding, till it under at or before flowering.

For most home gardeners, the annual cover crops are the best choices. Sow annuals in fall, and they either die in winter or naturally complete their life cycle by the next spring. (Perennial cover crops such as alfalfa (Medicago sativa) and red clover (Trifolium pratense) require more maintenance and are best used as permanent crops in orchards and vineyards.)

You can plant cover crops two ways, depending on your other plantings: Sow seeds after you harvest earlier crops (lettuce, beans, or tomatoes, for example), or plant low-growing cover crops between rows of any fall-planted crop, such as broccoli or spinach.

Don't skimp on soil preparation. Prepare the soil as you would for any other annual crop. Till the area and make sure the pH is between 6 and 7 (a soil test may be necessary). Broadcast seed at the recommended rates. On drier, sandy soil, plant three times as deep as the seed's width; on heavier soil, plant twice as deep as the width.

Sow seed at least 30 days before your first expected frost date. For cover crops that are only marginally hardy in your area, push back the sowing date to 60 days before the first frost. The more established a cover crop is before winter, the more likely it will overwinter well. Water the beds, if necessary, to help get the crop established. If you plant a legume crop, inoculate the seeds with the nitrogen-fixing bacteria prior to planting (available from cover-crop seed suppliers).

To decide which cover crop to grow, consider your region, the soil's needs, and your tools. To help novice gardeners, some seed companies sell mixes of grasses and legumes for and mild-winter areas; choices include Cold Zone Soil Builder Mix, which contains hairy vetch and cereal rye, and Soil Builder Mix, with bell beans, winter peas, vetches, and oats. Planting such mixes is the easiest way to sow cover crops.

Everyone Saves on Co+op Deals!
END_OF_DOCUMENT_TOKEN_TO_BE_REPLACED