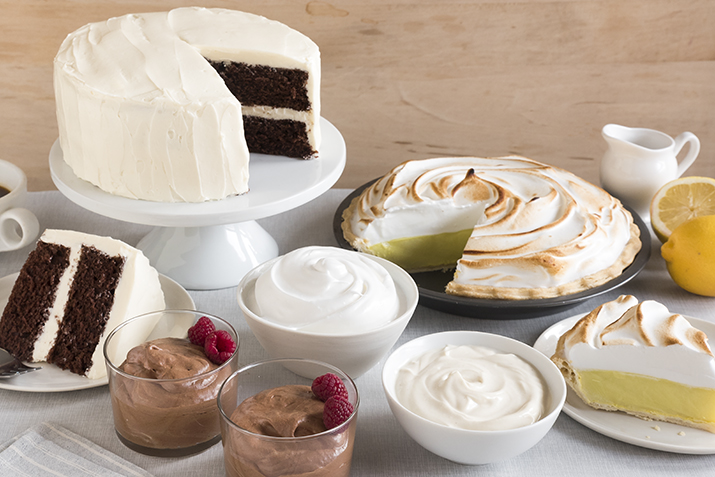 If there were a way to make amazingly tasty recipes, reduce food waste, save money, and replace eggs in baking, would you try it? Well, you can thank the vegans for an exciting new phenomenon. Our plant-based diet friends have put their hive mind to the task of finding a vegan egg substitute, and in the process, created a whole new food for all of us to use. It's called "aquafaba."

This amazing "new" food is actually something we have been pouring down the drain for years. Chickpea water, the solution that forms when you cook dried chickpeas, has now been christened with a new Latin-derived name. "Aquafaba," "aqua" for water, and "faba" for beans, can be made from any bean, but chickpea water works best. Because this liquid hasn’t commonly been used as a food, food chemists have yet to analyze it to understand how and why it works so well as a vegan egg substitute. Since it comes from chickpeas, it stands to reason that it contains proteins and starches, and another chemical called "saponins." Saponins mix with water to create a soapy texture, which fluffs into a foam when aerated.

It's this ability to foam that makes aquafaba a fantastic egg substitute. With a little help from sugar, starch, and a little something acidic to help stabilize it, aquafaba can be whipped up to a lofty peak, with nearly the same structure as whipped egg whites.

How to make aquafaba

Many aquafaba recipes call for draining a can of cooked chickpeas, and using that liquid. That is certainly easy, and it works pretty well. But you can actually make better aquafaba at home from dried chickpeas, and save both money and the resources that went into making the can that held the chickpeas. There are a few simple tips you'll need to follow.

Start with 2 cups dried chickpeas, sorted and cleaned, a piece of kombu seaweed, and water. Kombu is important, as it adds some minerals that make the aquafaba work better. You'll get the best results in a slow cooker or on the stovetop, not in a pressure cooker. Long, slow cooking extracts the most active ingredients from the beans. Use 6 cups of water, and cover the pan so you don't boil off too much liquid. Slow cook on low for 8 hours, or on the stove top on low for about 4 hours. When the beans are very tender but not falling apart, they are done. I like to refrigerate the whole pot so that the beans can continue to marry with the aquafaba, but you can strain them immediately after cooking, if you prefer. Discard the kombu. Measure the strained aquafaba, and if it is more than 3 cups, put it in a pot on the stove and boil it to reduce it down and thicken it to about 2 1/2 to 3 cups. Refrigerate for up to a week, or portion and freeze it. Save the cooked chickpeas for another use (check out our tasty chickpea recipes).

Now you are set to start cooking. When substituting with aquafaba, remember that it has none of the fat of eggs, so it's really more like egg whites. Egg whites give lift to angel food cakes and meringues, which are light and dry. It binds ingredients whether you whip it or not, and it holds bubbles if you whip it, but it doesn't make things rich or add thickness and body like eggs do in cakes or mousse. Because of that, a little mashed banana, pumpkin, or applesauce is often added to the recipe for a richer texture. You can add some oil, but be careful not to add it to the whipped aquafaba, or it will collapse.

Aquafaba is great in savory recipes, too

A great starter aquafaba recipe is mayo. Once you have a jar of it in the fridge, you can use it in your favorite potato and pasta salad recipes, or stir in some garlic and herbs to make aioli for dipping. You can use it like eggs to coat meat, fish or even tofu with crumb coatings. Recipes that call for an egg or two to bind them are your best bets, like meat or nut loaves, veggie burgers, or savory breads. You can blend part tofu and part aquafaba with seasonings, then scramble to make a softer, lighter version of a tofu scramble...

Check out these delicious aquafaba recipes!

Everyone Saves on Co+op Deals!
END_OF_DOCUMENT_TOKEN_TO_BE_REPLACED