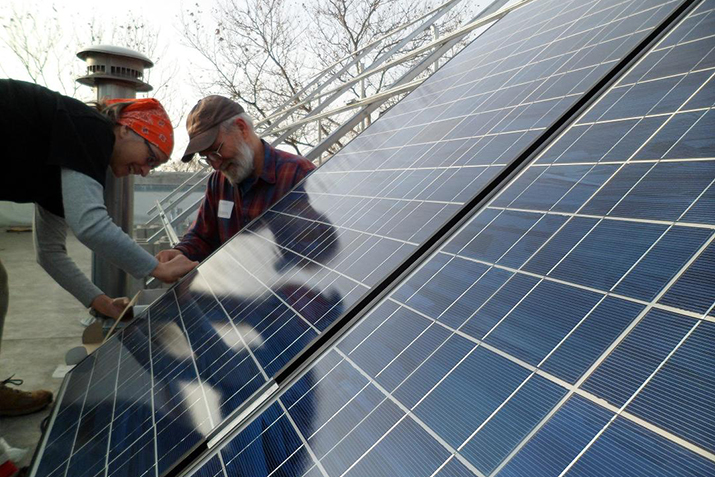 Bite into the spelt bread or seven-grain loaf at Co-op Bakery in Ypsilanti, Michigan, and you’re tasting pure, local ingredients. From the organic grains milled in the state to the sourdough starter that originated more than three decades ago at a now-defunct collective bakery, it’s all Michigan-based. You’re also biting into a piece of sunshine.

Since 2010, the Co-op Bakery has operated entirely on solar power and other renewable energies. Located in an adjacent storefront to its sister business, the Ypsilanti Food Co-op, the bakery is powered by 30 solar panels. Another 30 sit atop the co-op. Everything electrical in the bakery, including mixers, refrigerators, and lights, is powered by the solar panels, while the bread itself is baked in a wood-burning oven fed with salvaged urban wood. The bakery staff burns all of the shipping pallets that come to the co-op, and in recent years have also burned a large number of ash trees, victims of the invasive emerald ash borer.

Beginning in 2004, the solar panels above the co-op and bakery were installed in stages. Lisa Bashert, Marketing Director, said the co-op is proud to be among the organizations and businesses leading the way toward increasing solar power in their community. “Ypsi is working really hard to get 1,000 solar roofs in our community by 2020,” she says.

Dave Strenski, founder of SolarYpsi, agrees, saying, “Ypsilanti is fast becoming a ‘solar destination,’ the place to come to see and learn about solar power.” He adds that the co-op was the spark that instigated the movement in their community and “continues to be the focal point for solar education in Ypsilanti.”

And as just one example of how the co-op’s efforts have benefitted other organizations:  volunteers who helped erect the co-op’s panels have shared their expertise with other Ypsi organizations, putting up panels on the city hall, a nearby elementary school, and several local homes.

While the solar panels may be the co-op’s most visible commitment to being a green business, there are many other examples of similarly green practices. It’s location alone makes the co-op and bakeries green, as they are housed in a former millworks—reuse in action. The building has been retro fitted with double- pane windows, in-line hot water heaters, motion-activated light switches, and high-efficiency heating and refrigeration.

Bashert says that all of these are ways in which the co-op exemplifies Cooperative Principle #7:  Concern for community. “We care about the problems caused by greenhouse gas emissions and thus we’re working in many ways to reduce our power usage, especially that which is generated by coal plants,” she says.

The co-op was the first commercial customer to connect via net-metering with DTE Energy, a regional utility company. Net-metering allows the co-op to offer the energy created by its solar panels to other utility customers. When an appliance turns on, it automatically seeks the highest wattage available. On a sunny day, solar panels provide a higher wattage than the energy coming off of the traditional grid, which means that the co-op literally powers many of its neighbors’ appliances, while at the same time turning back its own meter. It’s a win-win—cheaper and cleaner power for the co-op and community and bread that’s as local as it can get.

Everyone Saves on Co+op Deals!
END_OF_DOCUMENT_TOKEN_TO_BE_REPLACED