A Taste of Summer in the Off Season: Sun-dried Tomatoes 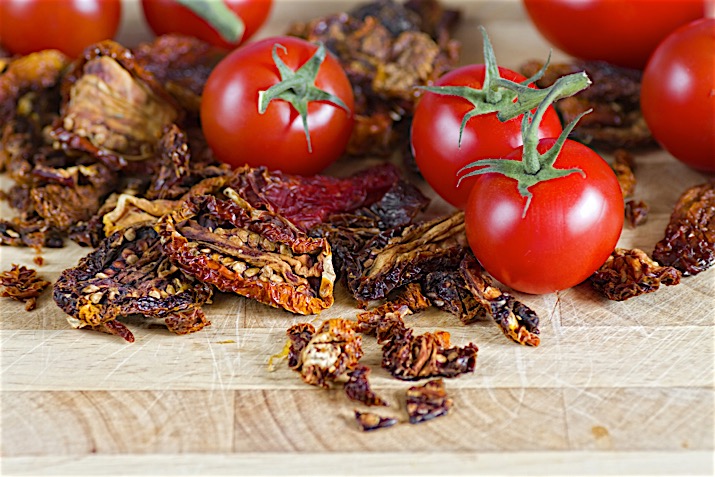 Sun-dried tomatoes. It’s warming just to think how the same bright summer heat that ripened the fruit can still broadcast its warmth in the off season.

These homely twisted little things hold the delicious flavor of the plump moist tomatoes they once were. The only thing that’s missing is the water. Dried tomatoes might seem expensive until you realize how concentrated they are.

I have to admit it’s taken me a while to understand how to use sun-dried tomatoes properly, even though the concept of dried ingredients is far from new. Dried fruit, which is more or less what dried tomatoes are, has got to be one of the oldest foods known. Way back before the taming of fire, people were finding vine-dried berries that the birds and bears missed, and recognizing that these were still edible. Perhaps it wasn’t such a leap to realize that when there were more berries than could be eaten fresh, they could be gathered, spread on warm rocks to dry and saved for later. And once fire was tamed, they could be dried by the fire if the weather was damp.

My co-op sells them in the bulk section simply as dried tomatoes, and dried they definitely are. Organic dried tomatoes can be kind of scary looking, all dark and twisty. If dried tomatoes still look pretty, it’s often because sulfites have been added to preserve their good looks. The same is true of all dried fruit.

But it wasn’t their homeliness that bothered me. It was what happened when I used them. For example, a while back I decided to add what I though was a few sun-dried tomatoes to a butternut squash soup that needed a bit of zing. The squash I was using was enormous, so I figured it could handle a lot of seasoning. I soaked a loosely-packed cup of dried tomatoes in a bowl of water and tossed them in.

This produced a soup which utterly violated my expectations. The lovely mouth-feel of the squash remained, but its flavor was utterly lost in an intensely hearty savor reminiscent of chili (minus the peppers, meat and beans). The liquid those tomatoes produced should have alerted me; when I poured the tomatoes into the soup, the soaking water was a dark rich color somewhere between espresso and red wine.

Now I suppose I really ought to use recipes. Many people do, and they swear by the results. But that’s not the way I learned to cook, and as long as I’m not baking, it usually turns out fine. I use common sense and experiment a bit with what I have on hand, and that’s what we have for dinner. But this time I was way off base. I did a little research and discovered that when using dried tomatoes, that cup of insignificant looking odds and ends was the equivalent of ten or twelve cups of fresh tomatoes! No wonder they dominated the butternut squash. You only need a few to transform a dish.

And that almost chili taste? It’s called umami, or “yummy” in Japanese, and it is the official new fifth taste, after sweet, sour, bitter and salt. It’s not really a new taste, of course. People have been enjoying it as long as they’ve had taste buds, but it was only recently acknowledged by food scientists. It’s sometimes referred to as a meaty taste, but fully-ripened tomatoes are loaded with the glutamates and nucleotides that create the umami flavor. Hence, dried tomatoes are a super-concentrated source of umami (but better, I discovered, when used judiciously).

To judge the amount of  dried tomatoes you might wish to use, you can do what I do nowadays, which is to look carefully at one of those scraps of dried tomato and ask, was this once a whole tomato? Half a tomato?  I’ve pared my original soup recipe down to half a dozen pieces, which produces a delicious and balanced version. The tomatoes cheer it up, but they don’t hijack it.

I’m working on learning how to use them in noodle dishes now. Right now I’ve got six or eight dried tomatoes chopped (actually I cut them up with poultry shears because they were amazingly tough) and soaking in a cup of olive oil. I’m going to grind them up with some Pecorino Romano to make a kind of pesto to use with pasta.

And maybe next summer I’ll grow enough tomatoes to dry some of my own. People use all kinds of techniques; anyplace where it’s hot and dry will work. I've heard of spreading them on cookie sheets in a car parked in the sun but I don’t think I have the nerve to try that one. Wouldn’t your car smell like a pizza parlor? I’ll probably just invest in a dehydrator if the crop is good.

In the meantime, I plan to continue experimenting with new ways to infuse sun-dried tomatoes' summer goodness into my cooking.

Everyone Saves on Co+op Deals!
END_OF_DOCUMENT_TOKEN_TO_BE_REPLACED