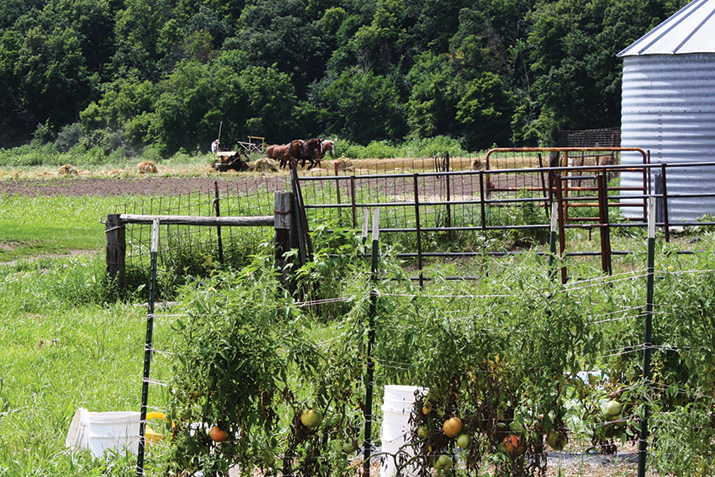 “I’ve never seen a year like this,” Jonas Hochstetter says as we walk along his rows of tomato plants in the late summer of 2013. “The ground was too wet at planting. The plants aren’t as healthy as they ought to be. The tomatoes will be a month late. It makes you wonder when we’ll have our frost.”

We are profiling an Amish co-operative called Stateline Farms near Cresco, Iowa, that supplies organic produce mainly to People’s Food Co-op in Rochester, although the La Crosse store carries some of Stateline’s product as well. Harvey Lambright is the organizer of the group. The project has about 20 active Amish farmers who provide vegetables and fruits for People’s. They are about 99% organic, according to Harvey, who notes that more and more Amish farms are getting their organic certification for produce.

Harvey was out cultivating when we arrived, and he stopped for a chat. He’s 57 years old and wears the distinctive Amish-style long whiskers. He has about nine acres in cultivation with tomatoes, potatoes, sweet corn (though the raccoons got most of that), brussels sprouts, and cabbage. He also raises chickens and hogs.

Harvey reports that he decided to go organic when he started noticing an increase in cancer in his family. He didn’t like the thought of all the chemicals conventional farming employed. He figured the organic route would be healthier.

From Harvey’s farm, Mike McGee took me around to meet Jonas. Mike is the English (non-Amish) go-between for Stateline. He handles their email and phone communication with retailers such as People’s Food Co-op. Mike is a farmer as well, and as he drives he tells stories about Stateline and the changes he’s seen in northern Iowa’s agriculture.

He kept 30 dairy cows for many years, he says, and once a year or so Bill the salesman would come around from the milk processing plant to settle on a price. One year Bill didn’t come around and Mike went to the plant and asked what happened to him. “Oh, company decided that any farm smaller than 50 head wouldn’t get service.” This was the end of Mike’s dairy farming. He now farms commodity crops only—and works with Stateline.

The farmer and essayist Gene Logsdon has written extensively on the farm practices of the Amish, considering them trailblazers of the low-cost, low technology farming that may be the future of American agriculture. In his essay “Amish Economics,” Logsdon recalls that his family farm discovered that getting bigger was not necessarily the solution. “It took all the milk from 70 cows to afford the technology to handle 100 cows, so we might as well have stuck with 30.”

From Harvey Lambright’s nine acres to Jonas Hochstetter’s 13, we are talking about small farms here, but when you consider that Stateline has 20 of these farmers, you have a large operation of organic growers. In such an organization, the small farmer doesn’t have to get big to survive. The variety of plantings and farm practices of a farmers’ co-operative may prove more responsive to the changing tastes of the consumer and the changing climate of the region.

“We could use two more boxes of heirloom tomatoes,” Mike tells Jonas. “All right,” Jonas says. “Yellow squash: Could you use more?”

“I decided to go organic because of the weeds,” Jonas tells me. “I was doing conventional farming in Wisconsin and I just kept getting more weeds every year, and I read that with organic practices you don’t have weeds. That turned out to be true.”

The rows of onions are sprouting tall and the ryegrass intercropped between rows is bright green. Jonas points out the drip irrigation on the onions. “That’s constant work: Gophers like to chew through the lines to get the water.”

As Mike and I climb back into his truck for the return journey, he says: “The Amish look like they’re so far behind—living in the past with the horses and stuff, but they’re ahead of the curve on so much that’s happening in farming right now.”

Republished with permission from People’s Food Co-op (Rochester and LaCrosse).

Everyone Saves on Co+op Deals!
END_OF_DOCUMENT_TOKEN_TO_BE_REPLACED