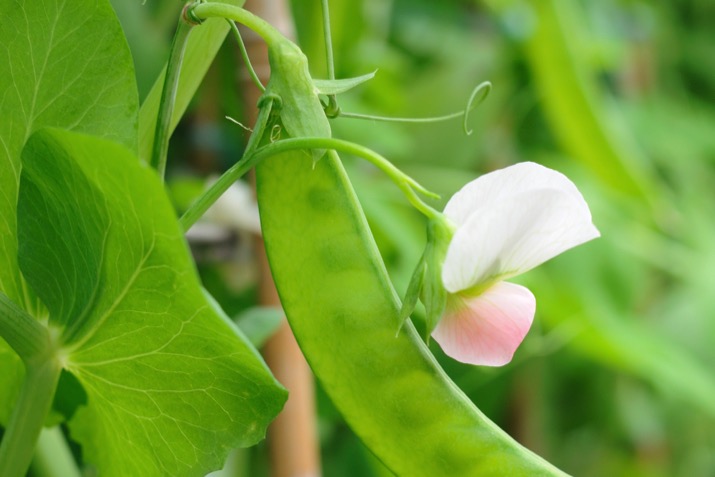 Sweet little peas nestled in their own nature-crafted, edible pods, snow peas may just be the ultimate no-waste food. Did you know that they're technically a fruit? Well, they're sweet enough to be convincing, and they can certainly be enjoyed raw. (The pod's fibers travel in only one direction, making them easy to chew.)

Though we think of them as an Asian vegetable (they're often referred to as Chinese pea pods), snow peas originally traveled from the Mediterranean to China, where they became a crucial ingredient in Asian cuisine.

In addition to their sweet taste, snow peas contribute a crunchy texture and bright color. They deliver on the nutrition front, too. Snow peas are an excellent source of vitamin C and dietary fiber and a good source of iron and manganese.

A frost-hardy, cool-season vegetable, snow peas are even known to survive an early spring snow, hence their name—and their ability to grow in many locations. The world's largest producers of snow peas are the United States (especially California), Great Britain, China, Hungary and India.

The variety names for snow peas are certainly enticing. Those you might come across in the produce aisle include: Mammoth Melting Sugar, Oregon Sugar Pod, Golden Sweet Edible Podded, Dwarf Gray Sugar, and Mammoth Melting Sweet Pod. How can you resist?

The French call the succulent snow pea "mange-tout," or "eat it all." All you really need do is pull off any strings by breaking the stem end of the pod and pulling the string.

While many of the recipes you'll find today celebrate the snow pea's Asian culinary heritage, this veggie's versatility extends well beyond those bounds. Pair it with asparagus, for example, to make a wonderful "let's celebrate spring" Snow Pea and Asparagus Salad with Ginger-Cardamom Dressing. Or steam it, and then drizzle with lemon juice, butter, and tarragon for an easy and extraordinary side dish. Or toss snow peas with a little olive oil and sea salt, then roast and sprinkle with pine nuts and Parmesan (keep an eye on them whenever cooking; thanks to their high sugar content, they'll burn quickly).

Pair snow peas with soft noodles in Cilantro Lime Noodles with Shrimp and Snow Peas or tuck fresh snow peas into Spring Rolls, for extra sweetness and crunch. They're classic, of course, in stir-fries (see Stir-Fry: Simple and Sensational).

Peak season for snow peas is from spring through the start of winter. Choose pods that are bright green, shiny, crisp and smooth. The seeds should be barely visible through the pods (which are flatter than other pea pods).

Once home, store snow peas in the refrigerator for up to five days. During those five days, it would be understandable if you snacked on one every time you opened the fridge.

Everyone Saves on Co+op Deals!
END_OF_DOCUMENT_TOKEN_TO_BE_REPLACED