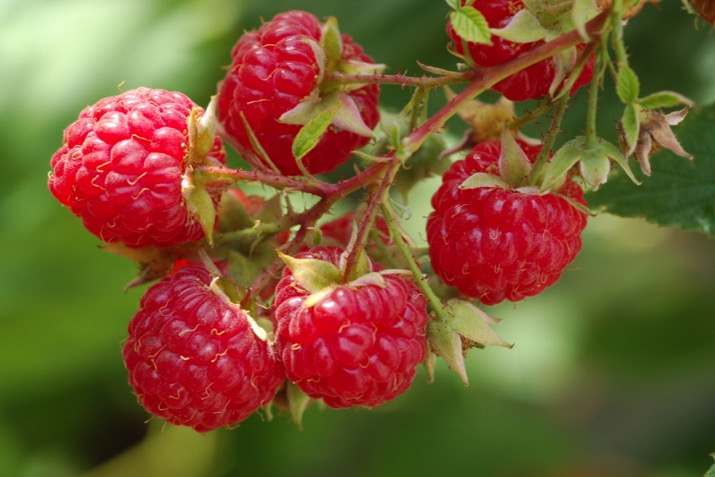 Did you know that raspberries aren't really berries? They're brambles (from the plant genus Rubus), and they're aggregates, which means they're an arrangement of smaller little fruits around a hollow center. One thing you certainly know is that they're a deliciously fun way to enjoy fruit.

Wild raspberries originated in eastern Asia, and their cultivation was first mentioned in an herbal dated 1548. They became popular in Europe and North America in the 19th century and are now grown commercially in many parts of the world, including Russia Poland, Yugoslavia, Germany and Chile. The United States is the third largest producer, with Oregon, Washington and California leading the way.

Raspberries are a very good source of dietary fiber, vitamin C and manganese and a good source of vitamin B2, vitamin K, folate, niacin, magnesium, potassium and copper.

There are ever-bearing varieties and summer-bearing (June) varieties of raspberries. A member of the rose family, most are red/pink, but they also come in black, purple, orange, yellow and white.

If you think the loganberry and the boysenberry are similar to raspberries, you're right; both are hybrids of raspberries.

So are raspberries best by the handful or plopped into hot cereal or cold yogurt? Maybe you prefer them sweetened in a dessert, like a Rhubarb Yogurt Tart, these delightful Raspberry Cream Scones or melt-in-your-mouth Raspberry-Almond Streusel Bars. For an especially refreshing treat, blend a bounty of them to create Raspberry Agave Sorbet or a nutritious Hidden-Spinach Berry Smoothie.

Raspberries are an excellent dessert garnish, too; look how enticing they make these Individual Light Chocolate Cakes. Fresh Berry Cream Tartlets also take advantage of their visual appeal by embedding them whole, with blueberries, in a bed of crème fraîche.

Glistening raspberries will produce a bright jar of preserves or syrup for pancakes or waffles or even roasted chicken breasts. Use them to assemble festive Stars and Stripes Sandwiches or accent a leafy green salad.

You'll find raspberries in your co-op's produce aisle or at the farmers market from June through October. Look for plump, firm berries. They should be slightly soft (not mushy) and deeply colored, since they won't continue to ripen after harvest. Make sure there's no mold, and avoid packages with signs of spoilage, such as stains or moisture. Raspberries should be loosely packaged, to avoid damage.

Because they're so perishable, try to buy on one or two days’ worth at a time. Remove any spoiled berries before storing them, covered, in a shallow container in the refrigerator. Another option is to spread them on a paper towel on a plate and cover them with plastic wrap before refrigerating. Wash raspberries just before using.

Everyone Saves on Co+op Deals!
END_OF_DOCUMENT_TOKEN_TO_BE_REPLACED