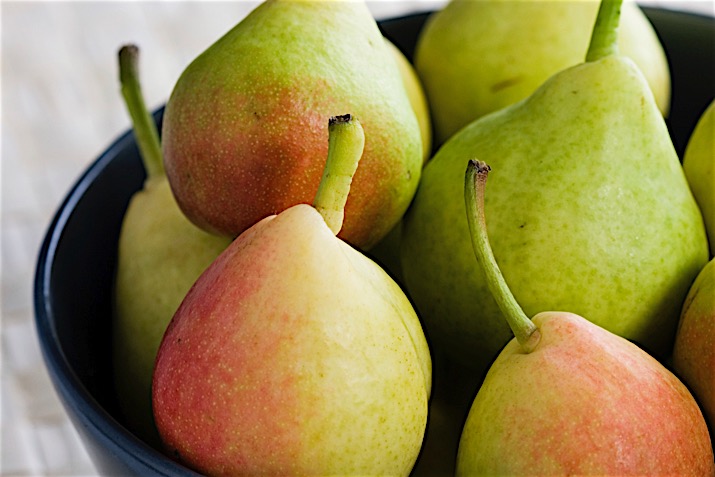 Pears have been much loved for centuries. In fact, they're referred to as a "gift of the gods" in Homer's Odyssey, and some historians date them clear back to the Stone Age. Celebrated for their sensuous shape as well as their flavor, pears have been preserved in more recent history in still-life paintings by Renaissance masters and modern artists alike.

A member of the rose family and related to apple, raspberries and quince, pear trees were first brought to America by early colonists in the east. While these trees didn't survive, those brought to the west by pioneers in the 1800s thrived. Today, the United States is the third largest pear producer in the world, after China and Italy. The trees still seem to prefer the west; eighty percent of the pears produced in the U.S. are grown in the Pacific Northwest, with Washington boasting the largest production.

Pears are a very good source of dietary fiber and a good source of vitamin C, vitamin K and copper. They also provides potassium. Be sure to eat the skins; according to the non-profit George Mateljan Foundation, studies show that the skin of pears contains at least three to four times as many phytonutrients as the flesh. It also contains about half of the pear's dietary fiber.

There are over 3,000 varieties of pears worldwide—red, yellow, green, brown and stunning combinations of these colors. Most of the pears you'll find in the co-op's produce aisle belong to the European or French categories of pears; these are aromatic, sweet and buttery. Here are some commonly available varieties:

Asian pears tend to be milder than European- and French-type pears. Apple-shaped, with a gritty skin and crisp flesh, they're most often used for snacking and in salads. Asian pears are also called Japanese pears, nashi pears, sand pears, apple pears and Taiwan pears. Varieties include Hosui, Kosui, Olympic or Korean Giants, Shinseiki or New Century and Twentieth Century or Nijisseiki.

Consider celebrating not only the mouth-watering flavor of pears, but their beauty, too. Use a selection of pears to create a seasonal centerpiece, or place one on each plate at dinner (tie a name tag on the stem if the occasion warrants name cards).

Juicy pears can be fully enjoyed out of hand, of course, but they go so well with so many other foods that you'll want to include them in myriad dishes.

Fresh pears are delightful first thing in the morning. Serve them chopped over waffles and French toast or oatmeal and other hot cereals (include some honey and chopped walnuts as well as a little cinnamon or cardamom). Fold them into muffin and pancake batters, and include them in smoothies.

Pears have an affinity for salads. Add them to a quinoa and spinach salad, or combine them with mustard greens or kale and goat or blue cheese. Cranberries, strawberries, leeks and mushrooms all go well with pears on a salad. Sprinkle with balsamic vinegar and olive oil, and consider including grilled chicken or seafood, too. For a lovely presentation, serve a roasted pear next to a green salad, as in this Roasted Pear & Arugula Salad with Pomegranate-Chipotle Vinaigrette. Pears are perfect in any fresh fruit salad, and be sure to include them in preserves, chutneys, jams and salsas.

For an appetizer or a fruit dessert, poach pears in apple juice or wine, and include warm spices like cardamom, cinnamon and ginger. This recipe for Poached Pears relies on red wine, vanilla, honey and star anise to complement the pears. Stuffing pears is another appetizer option. These Gorgonzola Stuffed Pears are stuffed with mascarpone and Gorgonzola cheeses, toasted pecans and dried cranberries.

Include sliced pears in your next grilled cheese. And for an enticing open-faced sandwich, try arugula, Camembert and grilled pears on a baguette.

Pears even hold their own in a main dish, like this Butternut Squash and Pear Saute, which enlists Anjou pears to add fresh fruity flavor to butternut squash and goat cheese seasoned with fresh sage. In this Roasted Pears with Couscous and Winter Fruits, pears take on a Mediterranean flair when combined with dried fruit, couscous and a sprinkling of feta.

The peak season for pears ranges from late summer/autumn to winter, depending on the variety. Anjou pears, for example, are available September through May or July, while Bartletts usually make an appearance in August through January or February.

Because pears ripen from the inside out, it's best not to check around the middle of the pear for ripeness. (If it's soft there, it's overripe.) Instead, gently press near the stem of the pear with your thumb. If it yields to gentle pressure, it's ready to eat. Choose pears that are firm but not hard.

Unlike most fruits, pears continue to ripen after they've been picked. And most pears deteriorate very quickly once they're ripe. Most pears don't change color much as they ripen, with the exception of Bartletts, which turn from green to yellow. Choose pears that are unblemished but don't worry about russeting (brownish spots) on the skin. These spots don't need to be peeled; they can be eaten.

If your pears are ripe, place them in the refrigerator, and eat them within a few days. Asian pears can last for months, though they'll develop a wine-like flavor if kept too long. If the pears you bring home need to be ripened, store them at room temperature. To speed ripening, place them in a paper bag. But for storage don't place pears in bags (especially plastic bags), or they'll quickly deteriorate.

To slow browning of the pear flesh after cutting the fruit, brush or dip the pear slices in a solution of half water and half lemon juice.

Eating and cooking with a wide variety of beautiful, luscious pears are delights of the fall and winter season. Be sure to take advantage of pears' full range of goodness.

Everyone Saves on Co+op Deals!
END_OF_DOCUMENT_TOKEN_TO_BE_REPLACED