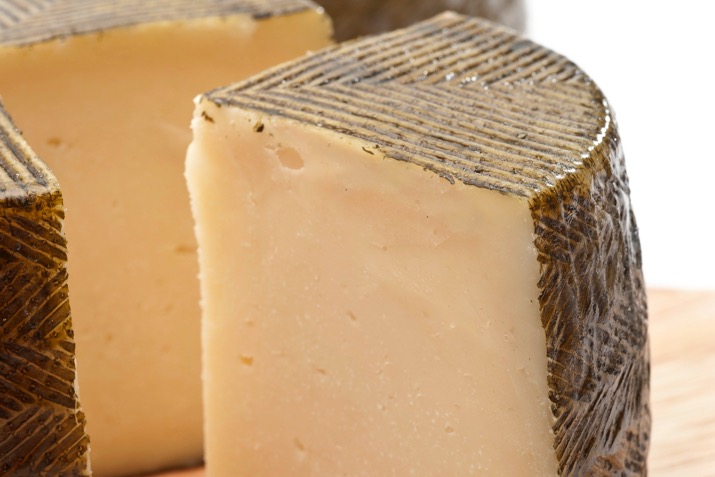 Manchego cheese hails from the Don Quixote land of La Mancha, an enormous arid plateau in southeastern Spain. The Manchega sheep, which produce the milk used to make the cheese, have lived in La Mancha for over 1,000 years, and the cheese made here is still aged in caves. While the cheese was originally formed by pressing curds into woven grass baskets, leaving a distinctive pattern on the firm rind, today the pattern (called pleita) is reproduced on the rounded insides of the molds that are used instead. Manchego remains Spain's most popular and culturally important cheese.

Origin-protected by the European Union, authentic Manchego can't be produced outside of the region. That's why, when produced in other parts of the world, like Mexico and the United States, it's called "Manchego-type" or "Manchego-style" cheese.

Compact, firm, yet buttery Manchego is categorized according to how long it's been aged. The longer it's aged, the stronger the taste, from very mellow and mild to peppery and zesty. Manchego Fresco is white and fresh, aged just two weeks. It's only available in the region where it's produced. Semicurado (semi-cured) is semi-firm and aged for three weeks to three months, so it's still very mild. Curado (cured) is aged for three to six months; it's still semi-firm, mild, nutty, smooth and creamy. Manchego Viejo is aged for a year. It's more solid, though still a bit crumbly, rich yellow, and sharper flavored than the other Manchegos, with a peppery bite. Substitutes for aged Manchego include Asiago, Romano, and Parmesan, while Monterey Jack and mozzarella make good stand-ins for younger Manchego.

Slightly salty, sweet and nutty, Manchego is distinctive enough to star as a flavorful appetizer. Serve slices for tapas, or try marinating cubes of Manchego and olives in an herbed vinaigrette to serve with a crusty French or Italian bread or crackers. And it's always welcome on a cheese plate (learn about Creating the Perfect Cheese Plate).

Manchego is wonderful when served with fruits like apples and pears, as well as dried figs, apricots and raisins. Olives, pickled onions and peppers, and artichoke hearts complement the cheese, as do quince paste (the Spanish love their membrillo and Manchego), ginger jelly, or apricot, cherry, or apple jam. Serve Manchego with asparagus, tomatoes, greens, rice, barley, pasta, eggs, chicken, pork, salmon, or any smoked or cured meat or fish.

Here are two recipes that celebrate Manchego's zest: Spanish Shrimp and Manchego Salad Pizza and Chicken Quesadillas with Salad and Chipotle-Lime Dressing. Both would be enhanced by a glass of Manzanilla sherry or a Pinot Noir.

Manchego can be frozen, though the cheese will be slightly grainy when you defrost it (which you'll want to do in the refrigerator). Remove the rind before cutting into wedges or slicing.

If you haven't tried Manchego before, you're in for a delectable treat. Don't be surprised if this cheese of La Mancha becomes a classic in your kitchen.

Everyone Saves on Co+op Deals!
END_OF_DOCUMENT_TOKEN_TO_BE_REPLACED