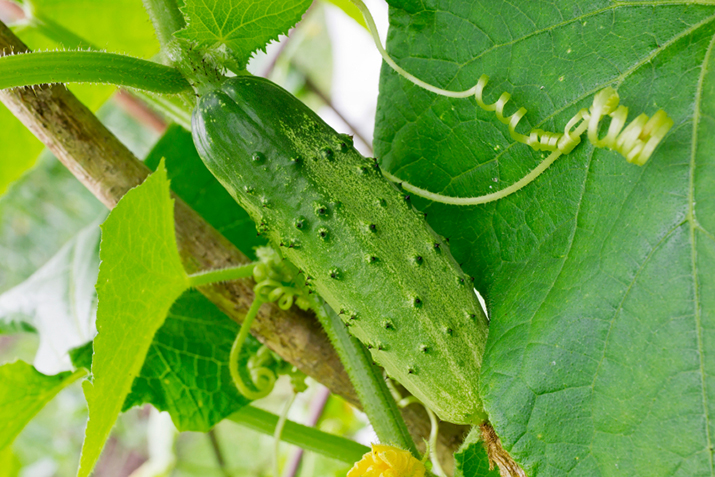 Cucumbers are one of those vegetables I used to buy without thinking about it and I ate them that way too. They were just there. Cucumbers. I put them in salads. But that changed when I was the chef at Greens. The head farmer at our farm started growing different varieties of cucumbers, ones that I, and our customers, had never seen before. I’d make a salad with five varieties on a plate so that people could taste the differences. I can’t honestly say that the flavor distinctions are huge although they are clearly present, but shapes, flesh and skin colors, texture and seed cavities do differ significantly. Most importantly, these cucumbers were nothing like the common varieties we all knew. They tasted like something, albeit a subtle something. They had a crunch and a snap and a subtle perfumed flavor, sometimes a hint of citrus, even a sweetness compared to those many of us have settled for that are watery, and pretty much tasteless and scentless with inedible waxed skins. The standard American market cucumbers were bred to have thick skins to protect the cucumber during shipping (most cucumbers have far thinner, more tender and edible skins) and were bred to be uniform and straight, a much easier form to pack and ship than a curvy snake-like cucumber.

Farmers' markets, CSAs and co-ops have brought cucumber awareness up a few notches by offering the interesting varieties of vegetables farmers like to grow, though they're often not marked with their names (a frustration of mine). Since I’ve had a garden I’ve become much more aware of the names of cucumbers and all other vegetables for this simple reason: when you order seeds, you have to choose one variety over another, and for that you need a name. Come January I’m looking at a catalogue wondering if Boothby’s Blonde would be a good choice, or maybe an Armenian cucumber? Perhaps a Kirby would be good since they can be pickled or eaten in salads.

Despite all the names (or lack of them) a good place to begin is to know that are two basic types: slicing cucumbers (or salad cucumbers) and pickling cucumbers. Slicers are generally smooth skinned while pickling cucumbers are warty and rough. “Burpless” cucumbers, sometimes listed as a third type, are cucumbers that were bred so as not to cause tummy upsets that result in burping. But these qualities often overlap in a single fruit (yes, the cucumber is a fruit) – which means it’s possible to have a cucumber that can be enjoyed raw, pickled, and without burps.

Once you look beyond the common cucumber, you’ll find that there are some quite wonderful cucumbers out there that are much more amusing (and flavorful), and I do like a little humor in my food. They may not be listed by varietal name, but there are some basic types you can learn to recognize, Oriental, Armenian, and Persian, to name the three biggest groups (cucumbers tend to be grouped from where they’re from geographically).

Asian cucumbers, mostly with Japanese names, tend to be long and slender with greenish flesh. Unless they’re grown on a trellis where gravity can do its job, they tend to bend and curve, which I find irresistible. I take them home and want to pile them in a bowl where they look like giant green creatures, but unless I’m rich in cucumbers, I don’t, because they don’t really want to sit out in the warmth. They quickly lose their moisture and turn flabby. Asian cucumbers may have some small protruding bumps or spines on them. Just brush or rub them off but leave the skin, which is thin and contributes to their taste.

Another delightful cucumber that’s actually, botanically, a melon is the Armenian cucumber, also called a snake melon. This large beauty has pale green skin and light colored flesh. When mature, the fruit becomes thicker in the middle than at the ends and curves gently. The thin skin is corrugated, which means that when sliced, the rounds have beautiful scalloped edges. There’s no need to peel Armenian cucumbers. They have relatively dry flesh which means they last longer in the refrigerator and are good eaten raw or pickled. They can get quite large, but even when they do, their seed cavities are smaller than those of other varieties. The Armenian cucumber is ideal for a sliced cucumber salad strewn with fresh herbs such as dill, tarragon, basil, and lovage (all cucumbers are so mild they can really go with any fresh herbs in season). They also make a very charming open-faced cucumber sandwich, which I pair with lovage leaves and lovage butter.

What I’ve grown to appreciate about cucumbers is something that they’re known for—their wetness. They’re mostly water, after all, even the drier-fleshed Armenian, but because of this they are truly refreshing, especially in hot weather. If it’s nearly 100° (in New Mexico, where I live), by lunch, some long wedges of cucumbers will be on my plate for sure, or I might puree a cucumber with buttermilk or yogurt and herbs have it as a smoothie. People from hot countries —India, the Middle East, North Africa – are great appreciators of cucumbers because they are so thirst-quenching. So not surprisingly, among the most appealing cucumbers are varieties from the Middle East. They are generally small (4 to 5 inches in length), narrow, have thin, tender skins, and (relatively) dry flesh. These are sometimes sold as Persian cucumbers, and have names like Amira, Jordan, Kidma, and more prosaically, Tenderfresh and Muncher. Indeed, you can munch on them as easily as you might eat a carrot or an apple. These are very exceptional cucumbers – lovely taste, not large—and I jump to buy them when I see them.

There are other cucumbers, too, that don’t fit into these categories.

The smallest cucumber, is the sour Mexican gherkin, a bite sized fruit that looks like a miniature watermelon. (Seeds are available from Baker Creek.) These are quickly becoming the new darlings for chefs probably because they look so beguiling, posing on their plates like little gems. I’ve not had one yet so I can’t tell you how they taste. But I’m guessing we’ll start seeing them, if not this summer, then next, as farmers figure out that this might be a great new item to grow.

Bright yellow Lemon Cucumbers abound in farmers markets and have for years. They aren’t a stranger to co-ops, either. It’s their looks that grab me, their shape (like a large lemon) and bright yellow skin. They’re just the most cheerful looking item and they fairly beg to be included in a plate of summer vegetables. Their skin is thick and bumpy which suggests they’re a better pickling cucumber than a slicing one, but smaller ones are often smoother, the skins more tender, the seeds less developed. Put them out as a summer crudités and let people eat around the skins (if the skins are tough), is my advice, or put them out, in wedges, with a knife.  In addition to the yellow lemon varieties, there’s a white lemon cucumber called Crystal Apple. In fact, there are a number of white cucumbers—White Wonder, Grosso Bianco Crema, and Boothby’s Blonde. Any seed catalogue will list some white varieties, which are often heirlooms. There’s even an Indian heirloom that has dark orange and brown skin from Seed Savers Exchange. I plan to try it next year.

Pickling cucumbers often have the word "pickling" in their name, such as Bush Pickle, Chicago Pickling, Picklebush, Japanese Long Pickling and the like. But the best known, the Kirby, can actually go either way and lacks the moniker “pickle.”. Similarly cucumbers that become cornichons, those little French pickles, are called, not surprisingly, Cornichons.

Although cucumbers can be cooked, I tend to favor them raw. In addition to eating them out of hand, I like to puree them--skins, seeds and all--with yogurt and handfuls of herbs to make a chilled soup. I like to chunk them and strew them over a lentil, farro, or quinoa salad. I use them in a raita to serve with vegetable curries. Of course they go into a green salad, or on bread with herb butter for an appetizer. An old-fashioned dish I like is a cucumber mousse with sour cream and horseradish and cucumbers are good with smoked fish, too. As always, nutrients reside in the skin so if it isn’t tough, prickly, warty or waxed, leave it on.

If you want to cook cucumbers, it helps to toss the cut pieces with salt first and letting them stand for a half-hour or so. The salt draws out a lot of that water and leaves the pieces firmer and in better condition for cooking. How? In a stir-fry, sauteed and served with butter or an herb-dense yogurt sauce, with shellfish.

However you choose to eat them, I encourage you to seek out the many varieties of cucumbers available and enjoy their unique and refreshing qualities--I know I'll be eating as many as I can get my hands on.

Everyone Saves on Co+op Deals!
END_OF_DOCUMENT_TOKEN_TO_BE_REPLACED