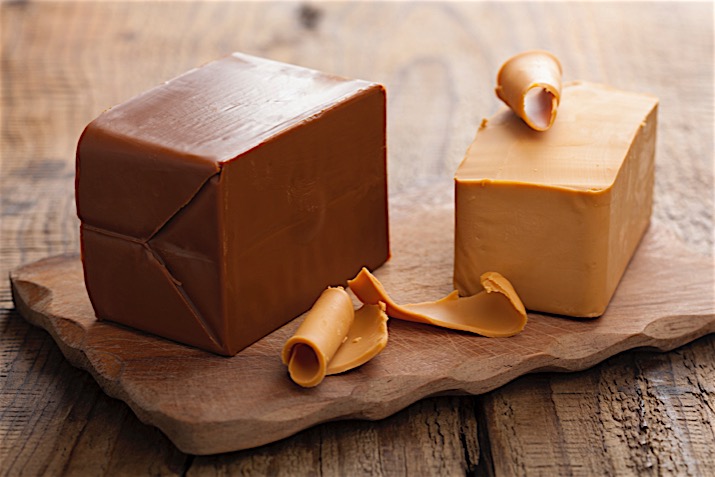 With the availability of so much fine cheese from near and far, it’s sometimes hard for a particular cheese to stand out. There are so many varieties out there: cheeses that are buried in ash and aged for years, cheeses that are submerged in wine, wrapped in leaves, or infused with nettles. Still others are encrusted with lavender blossoms or marigold petals—or even fennel pollen. But the Scandinavian favorite, gjetost, has no problem standing out in a crowd.

Pronounced “yay-toast,” this sweet, brown, creamy cheese is made from the whey of goat’s milk. Whey is the liquid part of milk that remains after milk solids—used to make most cheese—have been curdled and removed. To make gjetost, the protein-rich, nutritious whey is cooked down over a long period of time and blended with fresh cow’s milk and cream until it caramelizes into a rich, sweet and salty cheese that retains the distinctive tang of goat cheese at the finish.

Gjetost goes by different names in Sweden, Norway, Denmark, Finland and Iceland. Most commonly, it's known as “brunost” (brown cheese). In the United States, it's marketed and sold as gjetost, which is Norwegian for “goat cheese.” In Norway, it's also sometimes referred to as “ski cheese,” because it's a favorite item to pack in a lunch and enjoy between trips down the slopes. Its complex, long-lasting flavor satisfies the appetite, while providing protein and B-vitamins.

The rich, toasty flavor of gjetost makes it a Scandinavian breakfast favorite, in no small part because this is a cheese that pairs well with coffee! Try it sliced thinly and melted onto warm toast, or shave slivers of the cheese onto hot cinnamon-spiced oatmeal for a creamy, comforting breakfast. It’s also traditional to serve gjetost with bread, fresh fruits, and lingonberry jam. Cranberry sauce, which is more commonly available in the United States, makes a good substitute for Scandinavian lingonberries.

Because of its natural sweetness, gjetost is a great choice for a cheese course that's served as an end to a meal, but it's also a welcome ingredient in a range of desserts. Try incorporating a thin layer of the cheese into a baked apple tart, or grate a little into your apple pie filling. When warm and melted, this combination is reminiscent of caramel apples. Gjetost melts beautifully and can be combined and heated with milk, cream, and brown sugar to make a decadent and holiday-worthy sweet, caramel-like fondue with chunks of banana, pound cake, and pecans for dipping.

The salty, creamy aspect of the cheese even works well in some savory dishes, especially those with traditional Scandinavian flair. Game, such as elk and venison, pairs well with a mild gjetost cheese sauce and cranberry jelly, and the cheese also adds body and depth of flavor to a traditional cream-based sauce for Swedish meatballs.

Look for gjetost in the cheese case at your local co-op. It's usually imported from Norway and often sold under the labels “Ski Queen,” or “Ekte Gjetost,” which translates literally as “the best goat cheese.” No wonder this cheese stands alone!

Everyone Saves on Co+op Deals!
END_OF_DOCUMENT_TOKEN_TO_BE_REPLACED