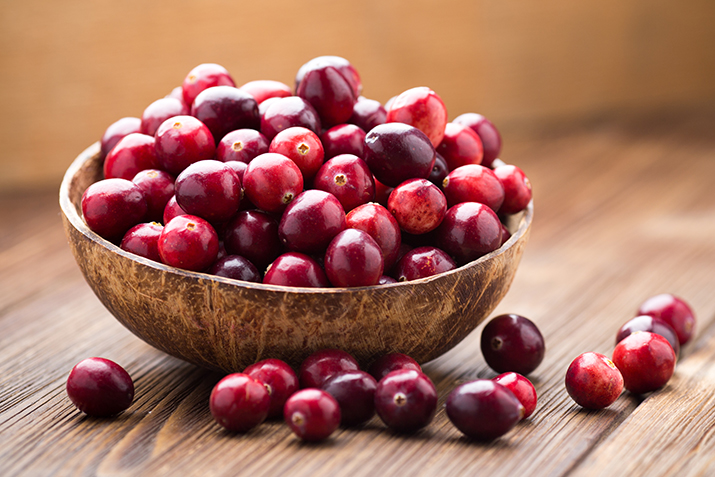 A native North American fruit, the vibrant juice of the cranberry was used as a dye by American Indians. The American Indians also used a poultice made from the berries to draw poison from arrow wounds, and they ate them, of course, cooked with honey or maple syrup, and often combined with deer meat to make pemmican (an early jerky of sorts). Dutch settlers called the fruit "craneberries" because of the resemblance of the pale pink blossoms to the heads of cranes that frequented the cranberry bogs.

Though it is still possible to harvest by hand, cranberry bogs are now usually flooded so that the berries float to the surface for easy scooping-up, typically by machines. Cranberry cultivation didn't begin until the late 1800s, though; before then the fruit grew wild in North America, as well as northern Europe and northern Asia. The berries are now cultivated on about 40,000 acres across the northern United States and Canada. Cranberry is the official state fruit of Wisconsin, its main U.S. producer. Other U.S. producers are Massachusetts, New Jersey, Oregon and Washington.

Cranberries are an excellent source of vitamin C and a good source of dietary fiber and vitamin E. They're high in phytonutrients and antioxidants, too. A half-cup serving contains only 25 calories—so go ahead and take seconds.

A relative of buckberry, blueberry, huckleberry and bilberry, cranberries belong to the genus Vaccinium. Over a hundred varieties of cranberries grow in North America. Those you're most likely to come across in the co-op's produce aisle are Early Blacks and Howes. The first berries to appear in the fall, Early Blacks are smallish berries, with a deep red color and sweeter taste than other varieties. Howes are bigger, firmer, tarter berries that store well and are often grown for making cranberry sauce. Newer hybrids—which produce larger berries often used for commercial juice and sauce making—include Ben Lears, Pilgrims, Stevens and Bergmans.

It wouldn't be Thanksgiving dinner without the visual highlight and flavor delight of a glistening red cranberry dish, but why limit your enjoyment of cranberries to one meal each year? Serve your favorite Thanksgiving cranberry dish any time, or consider trying a new cranberry recipe now and then.

That cranberry sauce or relish will stand in nicely for applesauce, aside most any main dish, from chicken or salmon to nut loaves. Have some fun combining cranberries with other fruits, like apples, mandarin oranges and pineapple in this version of Cranberry Relish.

Try this Cranberry Pecan Skillet Stuffing, with veggies, multigrain bread, pecans, cranberries, and, of course, sage and other spices at any holiday celebration or family dinner. Or rely on a Wild Rice Cranberry Apple Pilaf, in which mushrooms, apples and pecans join cranberries to flavor hearty wild rice. (Cranberries go nicely with other grains, too, like couscous.) Cranberries also bring colorful tartness to a barbeque sauce or dressing.

While tart, cranberries shine in breads and desserts, too (they pair beautifully with any variety of sweetener, from maple syrup to honey and agave). You might also experiment with dried cranberries (craisins), which are sweetened (natural varieties often rely on fruit juices to do the job). Add fresh or dried cranberries to muffins, quick breads, scones, cakes, cookies, and bars. Stir them into puddings (especially rice pudding) or mousse. Include them in your favorite snack mix. Or give them center stage in sorbet or sherbet or this lovely Cranberry-Orange Galette.

Surprise everyone at breakfast by substituting cranberries for blueberries in pancakes, oatmeal or granola. For instant cranberry enjoyment, sprinkle dried cranberries over any green salad, where they combine deliciously with goat or feta cheese and avocado, too.

Cranberries are usually available from September through December, though some stores only stock them for a short window in November. (No matter; cranberries freeze well.)

The berries should look fresh and plump and be firm to the touch. Ripe cranberries will bounce (they're nicknamed "bounceberries"), though this isn't recommended in most produce aisles!

Discard soft or shriveled fruit before storing, and place cranberries in the refrigerator for up to two months. They'll keep in the freezer for about a year, but use them as soon as they're defrosted. Rinse cranberries in cool running water just before using.

While they rise to the occasion at Thanksgiving and other celebratory meals, beautiful, vibrant cranberries are a fruit to be thankful for year round.

Everyone Saves on Co+op Deals!
END_OF_DOCUMENT_TOKEN_TO_BE_REPLACED