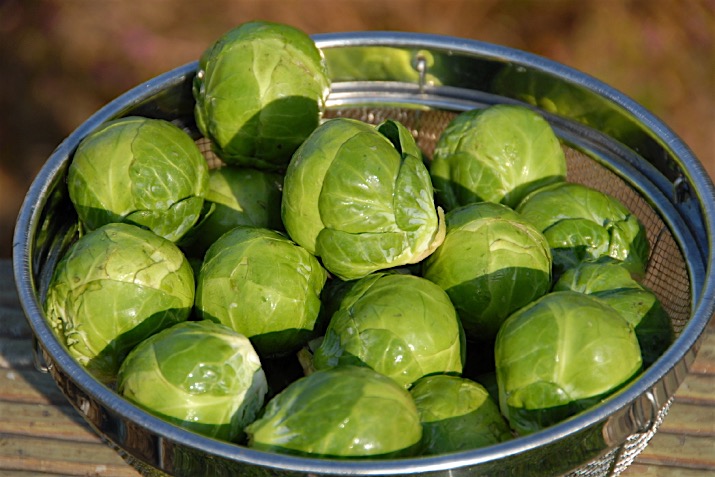 For years, Brussels sprouts were the vegetable everyone loved to hate. More recently, however, the hardy vegetable made a comeback, with trendy restaurants featuring these tasty "tiny cabbages" on their menus.

Those little cabbages grow along the stem of the plant, starting at the base and working upward. The taste is, indeed, similar to cabbage (though milder), and the texture is similar but denser.

Named after the capital of Belgium, where they were grown in the 13th century, Brussels sprouts were cultivated from the wild cabbage. In the United States, commercial production began around 1800 in Louisiana, where they were introduced by French settlers. California began production in the 1940s. They're also grown commercially on Long Island and in Ontario and Mexico.

Brussels sprouts contain high levels of dietary fiber and vitamins K and C. In fact, a 3-ounce serving of sprouts contains four times more vitamin C than an orange. They're also a very good source of folate, manganese, potassium, vitamins A and B6, thiamin, protein, magnesium, riboflavin, vitamin E, copper and calcium. They're a good source of omega-3 fatty acids, iron and phosphorus.

There are over 100 varieties of Brussels sprouts, which belong to the same cruciferous species as cabbage, collard greens, broccoli, kale and kohlrabi.

Popular varieties bred specifically for flavor include Kryptus, Albaru and Brodie. Long-Island (a variety introduced in the 1890s and long popular) is sweet and compact. Confidant is an early California variety, and Genius and Cobus are later-season varieties, tolerant of colder weather. Hybrid varieties include Bubbles, Jade Cross, Oliver, Prince Marvel, Royal Marvel and Valiant.

There are many ways to prepare Brussels sprouts. They can be steamed, roasted, sauteed, grilled or deep-fried. Some cooks like to cut an "x" in the bottom of each sprout before cooking, to maintain an even texture.

Try chopping the sprouts roughly and sauteing in olive oil and a little broth, then topping with toasted slivered almonds to bring out their naturally sweet and nutty flavors. Or steam until just tender and toss the hot sprouts with a pat of butter and a teaspoon of your favorite mustard for a healthy side dish with big flavor. Prepare these Orange-Glazed Brussels Sprouts as a side dish, or double the glaze and serve them over pasta for a stellar main dish.

Roasting brings out their sweetness and provides a tasty pasta or pizza topping, sandwich filler or side salad (toss with any vinaigrette). Simply drizzle with olive oil and roast like so: Mediterranean Roasted Vegetables. You might also season them with basil, oregano and garlic to enhance the Mediterranean flavor.

Brussels sprouts are in season from autumn to early spring, though they're available year round.

Store unwashed sprouts in a plastic or vegetable bag in the refrigerator crisper for three to five days—though they taste best eaten as soon after harvest as possible. The sprouts can be blanched and frozen for up to a year.

Everyone Saves on Co+op Deals!
END_OF_DOCUMENT_TOKEN_TO_BE_REPLACED