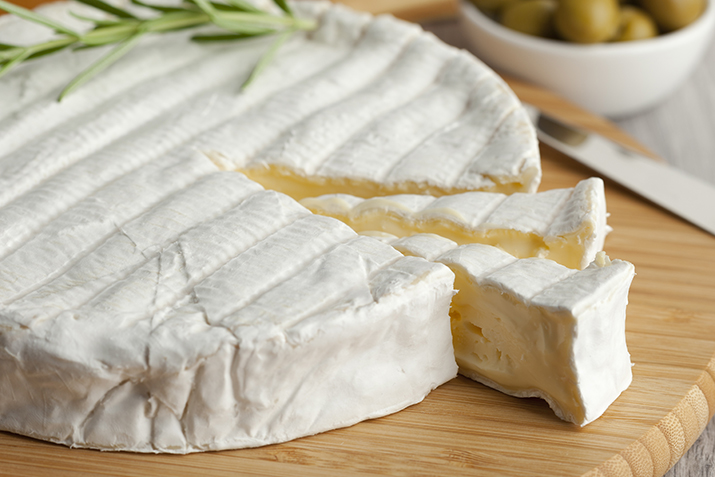 In 1793 when King Louis XVI, husband of Marie Antoinette, was sent to the guillotine for high treason, he had a dying wish: to have a final taste of Brie cheese. So legend has it. And it's easy to believe, given the divine taste and creamy texture of this eminently French cheese.

Louis wasn’t the first famous Frenchman to embrace Brie, though. In the 8th century, the French Emperor Charlemagne was served the cheese during a stop at a monastery in Reuil-en-Brie, France. The Emperor reportedly placed a large annual order afterwards and spread his love of the cheese throughout France.

Brie, named for that south-of-Paris village, is not only the most well-known of the French cheeses, it's yet to be overthrown as the "King of Cheeses" since first dubbed as such at an international cheese competition held by the Congress of Vienna in 1815.

An ounce of Brie contains about 6 grams of protein, along with 100 calories. Like any truly indulgent, rich food, it often takes just a sliver to satisfy.

Traditionally made from unpasteurized cow's milk, today’s Brie is frequently made with pasteurized cow's milk. Double- and triple-cream Brie cheeses are available, as are flavored versions, like herbed Brie, Brie with mushrooms, Blue Brie (with blue cheese cultures injected), peppered Brie, and Brie made with different types of milk, most notably goat's milk.

Brie cheesemakers cast thin layers of the cheese into round molds that are drained for about 20 hours. Then the cheese is unmolded, salted and injected with mold culture before aging for four to six weeks. While Brie cheeses are produced all over the world (especially in Canada, Denmark, and the United States), true Brie cheeses—such as Brie de Meaux and Brie de Melun—have designations of origin control and can't be sold by these names unless produced in Meaux or Melun.

Brie stars as a dessert cheese, drizzled with honey or balsamic vinegar, served with fruits, jams, and chutneys. It's a favorite on cheese plates, too, where you might consider contrasting it with more robust cheeses such as blue cheese. Or include it in a themed cheese tray with other popular choices like a flavored havarti and sharp yellow cheddar.

Brie will add flavor and texture to any grilled or cold sandwich. This recipe for Grilled Smoked Turkey and Brie features mango chutney as the perfect foil. And Brie will bring depth to dishes featuring eggs, beef, chicken, prosciutto, ham, salami or cured meats, as well as pizzas, quesadillas, soups and salads.

For an appetizer, serve a wedge of room-temperature Brie with honey-drizzled fresh fruit. Or try this warm, easy-to-make-yet-stunning Brie with Orange Preserves and Almonds.

A quality Brie will have been aged to perfection. If overripe, the cheese will have an ammonia smell and a bitter taste; if underripe it will be a bit chalky and tasteless. The center should be soft, creamy and pale yellow, and the outer rind should be firm and whitish.

Once home, store Brie tightly wrapped in cheese paper or parchment paper in the refrigerator. Serve it at room temperature (or warm), by the wedge or by the wheel, with the rind—which adds flavor—intact. If the Brie is runny, dip your knife in hot water before cutting to prevent sticking.

Whatever you serve it with, consider toasting the Emperor (Charlemagne). A fruity red wine, champagne, or any sparkling beverage will do nicely. Then again, so will a pilsner, pale ale or fruit ale.

Everyone Saves on Co+op Deals!
END_OF_DOCUMENT_TOKEN_TO_BE_REPLACED