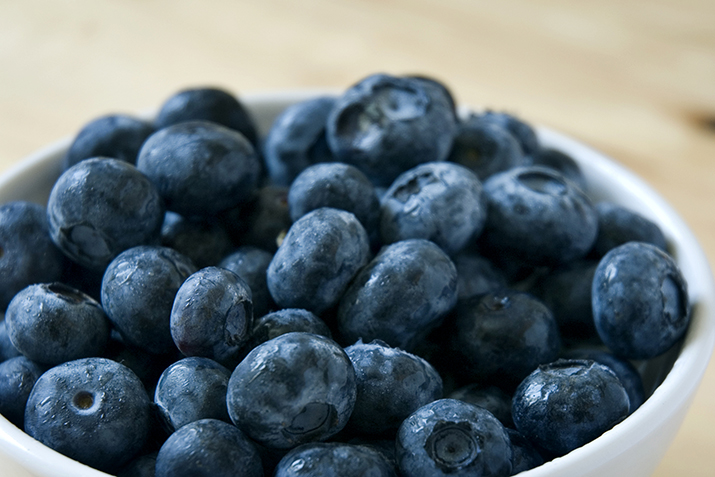 Blueberries are one of only three fruits native to North America; the others are cranberries and Concord grapes. Native Americans—and later the first colonists—picked wild blueberries for eating fresh and drying for winter use. Have you heard of pemmican? Invented by Native Americans, this high protein food traditionally contained the meat from large game and often fruit, such as cranberries and blueberries.

In the 20th century, Elizabeth White of New Jersey produced the first cultivated blueberries. They're now grown commercially in 38 states.

The blueberry shrub belongs to the heath family, along with the azalea, cranberry and rhododendron. The shrub needs good air and water drainage and takes two to three years to become established.

Very high in antioxidants, blueberries are also an excellent source of vitamins C and K and manganese, and they're a good source of dietary fiber and vitamin E.

There are many species and varieties of blueberries, ranging in taste from mildly sweet to tart and tangy, small pea to marble size, and blue to burgundy and purple black. Types include the Highbush (most common, from the Eastern seaboard), the Lowbush (used for canning, from the Northeast and eastern Canada) and Half-High (blending the qualities of both Highbush and Lowbush). Varieties of Highbush include Bluecrop and Blueray, which are hardy in cold weather; Berkeley and Bluecrop, which are large berries; and Herbert and Ivanhoe, which are especially tasty. Half-High varieties include aromatic, sky-blue Northcountry and Northblue, a dark-blue, tart variety, perfect for baking.

Want to transform an otherwise plain muffin, scone or pancake? Add a few blueberries! Sour Cream Coffee Cake with Blueberries is a pretty cake made with frozen blueberries, easy and always available. A handful of the fresh indigo berries instantly upgrades yogurt or cereal, too.

While they can take center stage in traditional Blueberry Pie or cobbler, blueberries also co-star well with other fruits, like the strawberries in these fun Stars and Stripes Sandwiches and the raspberries in these Fresh Berry Cream Tartlets, made with a pecan/maple crust. Blueberry Peach Bread Pudding with White Chocolate Sauce features fresh or frozen blueberries and peaches in challah pudding, topped with a creamy, sweet sauce.

By the way, if your blueberries take on green color in your baked goods, no worries—they're perfectly safe to eat (if not entirely attractive). The green cast is a chemical reaction to baking soda. Next time you might try cutting the amount of soda in the recipe a bit.

Speaking of color, if you want to avoid blue streaking in your dish (such as cakes and pancakes), stir the blueberries in last.

Be sure to enlist blueberries beyond dessert. They make an unexpected and delightful addition to salads and even salsas, like this blueberry salsa atop grilled salmon. When combined with warm spices, tamari and mustard, blueberries provide a spicy sweet sauce for Grilled Pork Chops with Blueberry Barbecue Sauce.

The peak season for blueberries is mid-May through early October. Choose dry, plump, firm, smooth-skinned berries with uniform color. Fully ripened berries are highest in antioxidants, and the fruit doesn't ripen after harvest.

If buying frozen berries, they should move freely in the bag. Berries that are clumped together may have been thawed and refrozen.

Blueberries last longer than other berries, thanks to their light, protective, powdery coating. Store fresh berries, unwashed, for up to five days in the refrigerator. To maximize freshness, layer them with paper towels. Wash and dry when ready to use.

Everyone Saves on Co+op Deals!
END_OF_DOCUMENT_TOKEN_TO_BE_REPLACED