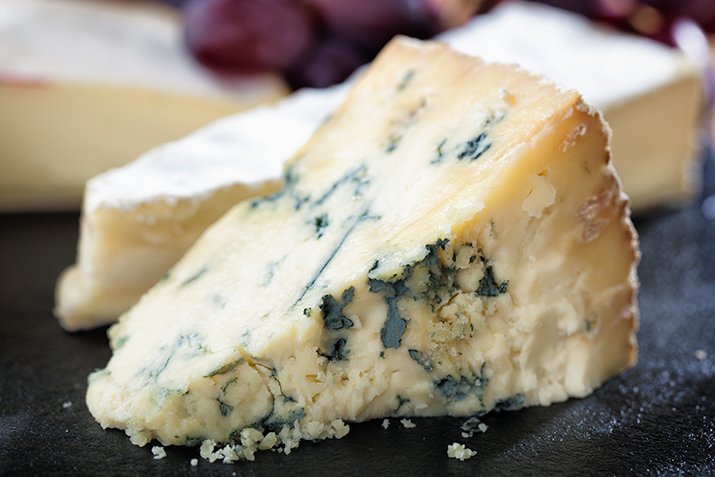 Strongly aromatic and powerfully flavorful, blue cheese is not for those with timid tastes. Thought to have been first made (accidentally) during the process of aging cheese in caves—which are favorable to mold growth—blue cheese is now made by injecting the cheese (or mixing the cheese curds) with Penicillium cultures. The characteristically pungent aroma is thanks to the bacteria.

Some types of blue cheeses have been around for centuries, while others are newcomers. Roquefort, for example, was created around 79 AD, and Gorgonzola was produced around 879 AD, while Maytag Blue Cheese was developed in 1941 at Iowa State University, in specially designed caves.

Blue cheeses share a sharp, salty taste—from somewhat mild to surprisingly piquant. Their texture varies from creamy smooth to dense and crumbly, and the colors range from white to pale yellow with telltale blue, blue/gray or blue/green veins.

Many countries and regions boast their own blue cheeses, like English Stilton, Cabrales from Spain, Italy's celebrated Gorgonzola, and the wide variety of blues in the United States, from Massachusetts-made Berkshire Blue to Oregon's Rogue Creamery Roquefort. Blue cheese from some areas in Europe have a protected designation of origin (AOC, or Appellation D'Origine Controlee). Roquefort, Stilton, and Gorgonzola are three such cheeses.

Piquant blue cheese makes for a stellar appetizer. Serve it on a baguette, along with sliced pears and toasted walnuts. Or partner it with other robust flavors, such as roast beef, scallions, stone-ground mustard and black pepper in these Cracked Black and Blue Canapes. A blue cheese dip or dressing with crispy celery sticks is a classic accompaniment to spicy buffalo chicken wings.

Blue cheese becomes milder and sweeter when cooked, so this might be a good introduction for a newbie. Celebrate blue cheese on pizzas, in grilled cheese sandwiches, and burgers. Use it in fondue, risottos, and pastas galore. Crumble blue cheese atop any broiled or grilled meat, as in this Sheet Pan Steak with Blue Cheese and Broccoli or use it to make a knockout sauce for your steak. This Stuffed Lamb Meatball recipe features blue cheese mixed with lamb, hazelnuts, cranberries, rosemary and sage.

Double-wrap your blue cheese in wax paper or parchment paper (the two layers are to prevent the aroma from permeating other foods), then plastic wrap (or a storage container), and store it in the refrigerator. Though it will keep for several weeks in the refrigerator, it'll become stronger with age, so it's best to use it up within a few days of purchase.

To freeze, wrap the blue cheese in freezer wrap and place in a freezer bag. It can be frozen up to six months, though the cheese will become more crumbly once thawed.

Whether you dig into a wedge for snack time or crumble just a touch over a salad, there's a way for just about everyone to enjoy piquant, distinctive blue cheese.

Everyone Saves on Co+op Deals!
END_OF_DOCUMENT_TOKEN_TO_BE_REPLACED