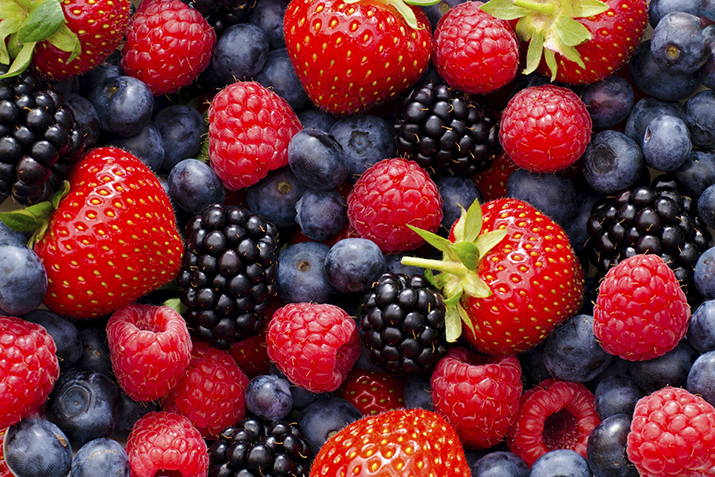 Ah, the magical world of berries. Used in ancient remedies and revered in Pokémon and the real world alike for their (antioxidant) powers, berries are, in the words of food writer Janie Hibler, “Mother Nature’s edible little pills.”

Not to mention delicious. Easy to eat, easy to preserve, and perfect for all sorts of adventurous cooking both sweet and savory, these tiny gems won’t let you down.

So say you’re wandering away from your local store. Like on a summer road trip. You may want to hearken back to the good old days of berry picking because doesn't it sound beautiful and pastoral? Or maybe you just want to know which berries are native to your ‘hood for flavorful summer cooking and snacking.

For all that and more, welcome to our jammin’ cross-country guide to regional berries. Though these berries can be found in numerous regions, we've focused on where they’re most known across North America. Remember: when scavenging for these tasty treats, don’t pick berries you don’t recognize. That said… gotta catch ‘em all!

The belle of the berry ball, everyone loves strawberries. With its bright color, sweet aroma and juicy texture, the strawberry is harvested seasonally across the country but is known to be most “fruitful” in California, and is best there right now in June. Used to treat depressive illness in 14th-century Europe and planted for royalty, it is indeed a joy-inducing diva of a fruit.

Native to: The West coast, most notably California. Strawberries are also increasingly produced in Southern states such as Georgia and Florida.

Welcome to the dark side of your palate. A major ingredient in jams, pies, and wine, blackberries are also great eaten raw with some whipped topping. And due to its widespread growth, the blackberry is easy to find! High in Vitamin C and anthocyanin (a type of antioxidant that can help reverse cell damage) blackberries have been linked to disease prevention.

Edible wild berries that grow from California to Alaska, salmonberries look like yellow raspberries and are made into jams, candies, jellies and wines. Traditionally, these berries were an important food for Native Americans, who ate them with salmon. Try it!

Native treasure finds: The West coast, from California to Alaska.

Did you know? Blackberries, strawberries and salmonberries are not true berries but compound fruits. Fact: Fruit is a seed-dispersing part of a flowering plant produced from one or more botanical ovaries. Compound, or aggregate, fruit is made up of several ripened ovaries joined together, whereas a true berry is produced from a single ovary. So all berries are fruit, but not all fruit are berries. Yeah, we’re having a Bill Nye moment here.

Load up on the elder’s wisdom. These small, dark berries grow in clusters and are used in jams, cake mix, and muffins. Although found in the Northern U.S., they are most known for their use in European syrups, extracts, teas, and liqueurs. Très chic.

Although a thimbleberry won’t protect your finger, it sure is fun to squeeze a handful of them. A tart red berry similar to the raspberry, the thimbleberry becomes soft and flat when picked. Because of its mushy texture, thimbleberries are best for jam. You’ll want a picking pail for this one!

We are major fans of the crans. Although their season is late autumn, they preserve really well in the freezer and add the perfect tanginess to fresh summer drinks (Cosmo, anyone?). Cranberries are white when unripe and then blush to gorgeous red. They are high in Vitamin C, dietary fiber, antioxidants, minerals and manganese, which give them plenty of health benefits!

Throwback: Remember when Willy Wonka turns Violet into a blueberry? While we're not sure we'd want to turn into a blueberry, we sure like to eat them. Blueberries contain high levels of antioxidants and have a flavor that is both sweet and tart. A classic all-American summer ingredient, blueberries can be used in just about anything.

Native treasure finds: Lots of regions around the U.S., especially Eastern and Northern states. Blueberries are increasingly cultivated in the South.

Serviceberries (also known as juneberries or sugarplum) taste like blueberries with a hint of almond. Sweet and fragrant, they are excellent to eat raw. Track them by their snowy white to pale pink flowers (truly the stuff of fairytales). A service indeed, lil’ serviceberries.

Classy and delicious, black cherries have that irresistible sweet-sour thing going on. Awesome flavoring for sodas, ice cream, jams, and pies, contrast the black cherry’s sharpness with some dark chocolate.

Ah, concord grapes: accessible, edible little balls of happiness. Try freezing grapes for the ultimate pop-in-your-mouth summer refreshment. If you happen to associate concord grapes with your childhood (juice boxes, anyone?), grow those grape babies up by incorporating them into salads, slaws, and rice dishes.

Everyone Saves on Co+op Deals!
END_OF_DOCUMENT_TOKEN_TO_BE_REPLACED