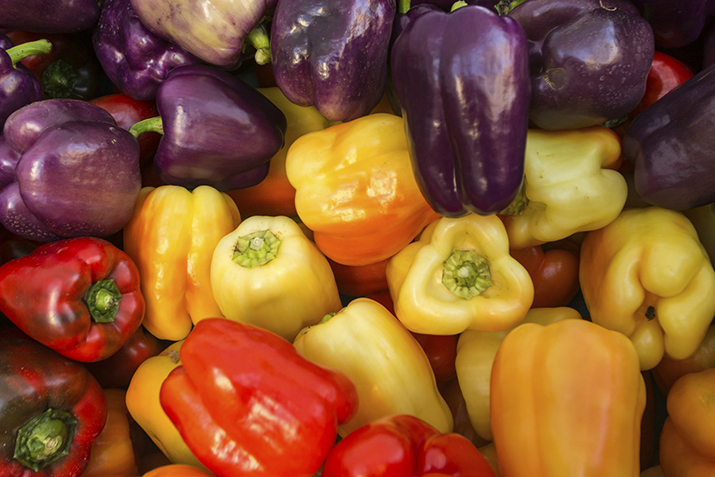 While unrelated to black peppercorns from which we grind the spice, bell peppers may well have been similarly used—as a dried spice—in Mexico as early as 6,000 B.C. Archaeologists have concluded that in ancient times the pepper was harvested and dried, then ground as needed for seasoning. Columbus may have had something similar in mind when he misnamed the plant "pepper" as he searched for peppercorns.

The most popular of the sweet peppers, "bell" is the term for those with three or four lobes. Along with eggplant, tomatoes and potatoes, bell peppers are members of the nightshade family. They're also in the same family as hot chile peppers; they just don't contain heat-inducing capsaicin. And yes, they're a fruit (they contain tiny seeds), not a vegetable. Some are convincingly sweet, too!

Native to Central America—where they've been cultivated for more than 9,000 years —Mexico and northern South America, bell peppers can be grown in tropical and temperate climates. The main commercial producers of bell peppers today are China, Turkey, Spain, Romania, Nigeria, Mexico and the United States. States with the highest production are California, Florida and New Mexico.

Bell peppers are an excellent source of vitamins C and A. They're also a very good source of fiber, folate, vitamin K and trace minerals. Not only are red bell peppers sweeter than green bell peppers, they contain twice as much vitamin C, too.

Depending on variety and when they're harvested, bell peppers come in an array of colors, including green (an unripe pepper), red, yellow, orange, purple and brown. Green and purple bell peppers have a slightly bitter, grassy flavor, while orange, red and yellow bells are sweeter and fruitier—with red being the sweetest.

Common varieties of bell peppers include the thick-skinned, red or green Bell Boy; the blocky, crisp and sweet California Wonder, also in green and red; and Purple Beauty, a thick-walled, blocky and dark purple variety.

Mini Belle peppers are one or two inches long with very sweet flavor. They're available in red and yellow. Snacking Mini peppers, most often yellow and orange, are pointed, blocky, sweet and crunchy with few seeds.

With bold colors and bright flavors, bell peppers make a dazzling addition to everything from side salads to main courses. Try this Caramelized Onion Pizza, featuring roasted or grilled bell peppers and goat cheese. Or fill whole green peppers with Tex-Mex fare for Southwestern Stuffed Peppers.

Bell peppers make a statement on the veggie platter or in traditional antipasto salad. Their delightfully crunchy, fresh taste also provides the perfect foil for creamy dips and dressings. Consider trying them on any sandwich, in place of (or together with) a tomato.

Bell peppers are a lovely addition to sauces, too, like this Red Pepper Harissa Sauce, full of spices, bells and chile peppers, or the sauce in this Tempeh Cacciatore recipe. Grilled Chicken with Roasted Red Pepper Coulis features roasted bell peppers pureed with sundried tomatoes, a topping that would also be delicious on burgers.

Bells have an affinity for eggs. Saute red and green bells and serve with scrambled eggs on a sub-style bun for a quick and nutritious lunch or supper. Or use them to add color, texture and flavor to a luscious Asparagus and Bell Pepper Quiche. Any bell pepper makes for a terrific Goat Cheese and Bell Pepper Omelet.

While most plentiful in the summer months, bell peppers are available year round. Look for brightly colored peppers that are heavy for their size, with a glossy, smooth, taut, unblemished skin. The skin should be firm but yield gently to slight pressure. The shape of the pepper does not affect the taste.

Store unwashed peppers in the refrigerator for about a week; green peppers may last a little longer than red, yellow or orange peppers. Peppers can also be chopped and frozen, raw or cooked.

Everyone Saves on Co+op Deals!
END_OF_DOCUMENT_TOKEN_TO_BE_REPLACED