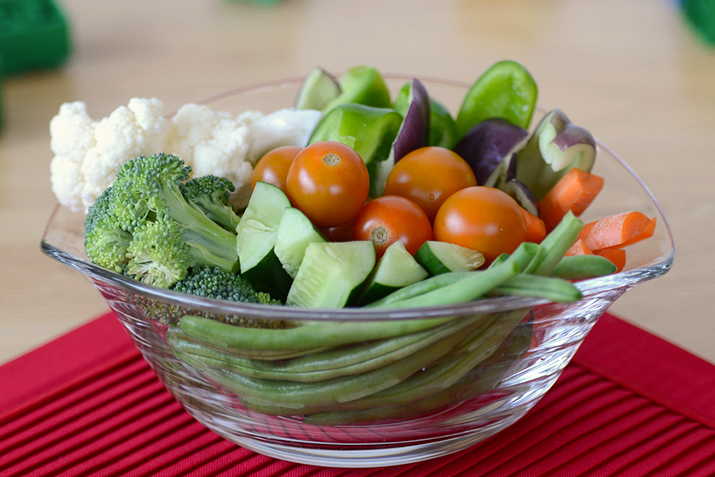 I recently became a 40-something grandmother (surprise!) and having a toddler part-time around the house has been illuminating. I remember being a stressed-out young mom with a toddler, and despite my good intentions, I didn't always feed him the best foods. Sugar was off the list for the first two years and I always bought whole grains, but frankly, the one thing I didn't do was expose him to a lot of veggies. He didn't like them, and why incite a tantrum? Besides, I wasn't eating them very often myself.

Now that I’m older, wiser, and have succumbed to the more subtle charms (and nutritional benefits) of vegetables, I would hate to see my granddaughter follow the same habits. As an un-frazzled grandmother, I see opportunities for creating and reinforcing valuable eating habits that will stick with her for the rest of her life. It has become my new mission: Mission Vegetable.

“But what about fruit?” you might be thinking. “My kids eat fruit. Isn't that enough?” Of course your kids can get great nutrients from fruit, but fruit is easy. Who doesn't like fruit? Banana wheels, juicy strawberries, big green grapes, Clementine segments—not a hard sell. Although fruit is far superior to cookies or candy, it’s important to balance fruit with veggies, for different nutrients in a low-sugar package. Veggies can train a child’s palate to appreciate a wider range of tastes beyond “sweet.”

But vegetables take longer to love. Some kids may need multiple exposures before they are even willing to give veggies a taste. After that, they may need anywhere from 8 to 20 tries (research varies on this one) before they are willing to decide they like that taste. Even the most well-meaning parent can get discouraged after a few rejections. Besides, who wants to spend an afternoon cajoling a toddler to taste a rutabaga? I could name ten things in ten seconds that I’d rather do.

Isn’t it easier to break out the graham crackers and the chocolate milk?

Another barrier to veggie consumption is that vegetables don’t necessarily lend themselves to easy snacking, especially for toddlers. Veggies don’t just swim down the gullet like those little cheese-flavored fish crackers do. What kid wants to gnaw on a carrot or decide how best to eat a broccoli floret when there are Big Wheels to ride, baby dolls to feed, rocking horses to tame, and block towers to build? Who has time for all that chewing? A few fruit snacks, a swig from a juice box, and they’re good to go.

It would seem Mission Vegetable is doomed. But wait! I have an idea. It might even work to train our kids to eat more vegetables without too much inconvenience to them or us.

We aren't supposed to eat mindlessly. We’re supposed to focus, Zen-like, on every sensation as we slowly savor our food (a technique surely invented by somebody who never had a toddler). The truth is, most of us eat mindlessly at least some of the time, whether at the computer, in front of the TV, while reading or talking on the phone or working through the lunch hour. Kids do it, too. How many toddlers do you see teetering around the playground clutching sippy cups and cereal bars? A lot, that’s how many.

So what if we combined mindless snacking with vegetables, transforming a formerly bad habit into a good one?

I had to try it, and here’s what I discovered: timing is everything. The trick is to catch kids in between those times when they are climbing to the top of the jungle gym or chasing the dog around the living room. The second they sit, after having worked up an appetite, that’s when you make your move. Here’s how to do it:

First, pick up some veggies—start with two or three varieties that taste good raw, and be sure to prepare enough for you and your youngsters. Some suggestions: grape tomatoes, broccoli and cauliflower florets, cucumber slices, carrot sticks, celery sticks, blanched green beans, pea pods, and every color of bell pepper strips.

Now, here’s the sneaky part. Watch them carefully. As soon as they flop down on the floor to play a board game, pet the cat, watch a video, or work on that Lego masterpiece, slyly place a bowl of veggies within arm’s reach, then slink away unnoticed, like a veggie ninja.

To make the veggies seem even more appealing, include one or two bowls of kid-friendly dip. My kids like hummus, Greek yogurt with garlic salt, salsa, and bean dip. My kids will eat an entire stalk of celery if it’s filled up with nut butter, and my granddaughter will eat just about anything if it’s dipped in queso (melted cheese dip). Hint: Serve on a tray or placemat, to avoid mess.

Become the veggie bowl’s biggest fan. Look enraptured as you crunch on carrots or kohlrabi and make satisfied ‘yum yum’ noises. “Oh, you want the veggie bowl? I’m not sure I can part with it…but…well, okay. I’ll make the sacrifice for your happiness. It’s what moms do…”

Guess what: It works! At least, some of the time. And it’s easy. You’ll also feel like you've scored a major parenting coup when you witness your kids mindlessly filling their bellies with green beans and cauliflower and red pepper strips while they flip through board books or draw pictures of the dog. Next, they’ll start asking for more hummus, scrawling “broccoli” on the shopping list you keep on the refrigerator, and fighting over the last baby carrot. As I write this, my son is crunching on celery with peanut butter and my granddaughter is toddling around with a sippy cup, and guess what it’s full of? Peas. Yes, green ones!

Because the best part of mindless veggie snacking is that at some point, when they least expect it, kids are going to notice what they've been eating, and almost without meaning to, they’re going to notice that hey…they actually like vegetables.

Everyone Saves on Co+op Deals!
END_OF_DOCUMENT_TOKEN_TO_BE_REPLACED