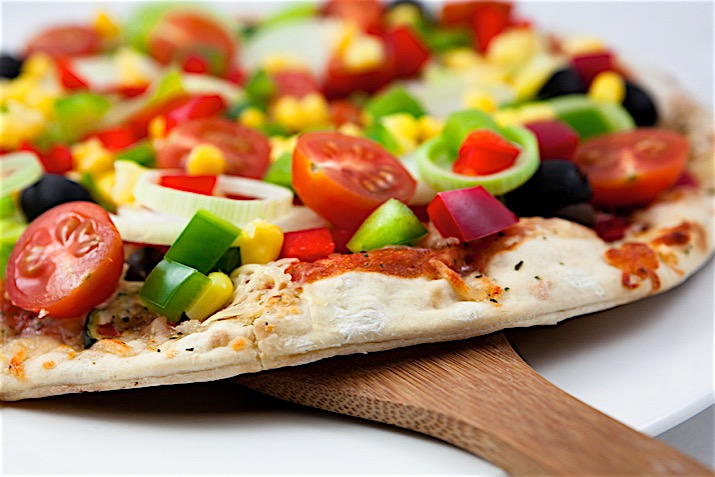 Pizza. It has to be the most popular food known to humans. In the U.S. alone, the National Association of Pizza Operators says 3 billion pizzas were consumed in 2011, and 93% of Americans eat pizza at least once a month which translates to  an estimated  average 350 slices eaten every second of every day.

Pepperoni is America's most popular topping; it's on about 36% of all pizzas for an estimated whopping 251.7 million pounds of pepperoni per year eaten on pizza. Whether or not pepperoni is your favorite topping, there are plenty of fun and tasty ways to reinterpret the much loved pizza.

Of course, making your own pizza dough is wonderful (here's an easy pizza crust recipe), but there are plenty of options to use for ready-made crusts and for quick and easy pizzas. From whole grain or white, to gluten-free, try frozen pizza dough, pre-baked crusts, pita bread, flatbreads, naan, tortillas, or even puff pastry dough.

Tomato sauce and mozzarella, while simple and delicious, can get kind of repetitive, so why not branch out and try other sauces and other cheeses, or maybe even go cheeseless? Just take a look at the sauces available at your co-op for inspiration: prepared pestos, curry sauces, Asian sauces, even spreadable cheeses can jump into the role of pizza sauce. Sound crazy? I've put Indian Tikka Masala and goat cheese on pizza, with a few cauliflower florets for crunch, and it was a hit.

I've become enamored of the "salad pizza," which pairs a hot, crispy crust with a fresh, light jumble of salad on top. The balance between the warm, savory base and the cool, tangy salad will give you a whole new concept of what pizza can be. Why make a separate salad, when you can pile it on the pizza? This is a great way to enjoy greens like arugula, fresh herbs, or slivered veggies. Try the simple Arugula and Shaved Romano Salad Pizza, for a perfect example of this.

If you are ready for a real change of pizza-pace, try a Thai Peanut Pizza. It's a mix-up of favorite flavors from Thai restaurants, including peanut sauce, cucumbers, peanuts, sprouts, and chiles. The creamy, coconutty sauce is as rich-tasting as cheese, and you may be so distracted by how yummy it is that you won't even notice that it's vegan.

I say, don't hold back. Get creative and "think outside the (delivery) box." You can have a blast making fun and innovative pizzas catered to your individual taste, all without ever picking up the phone to order one.

Check out our many tasty pizza recipes.

Everyone Saves on Co+op Deals!
END_OF_DOCUMENT_TOKEN_TO_BE_REPLACED