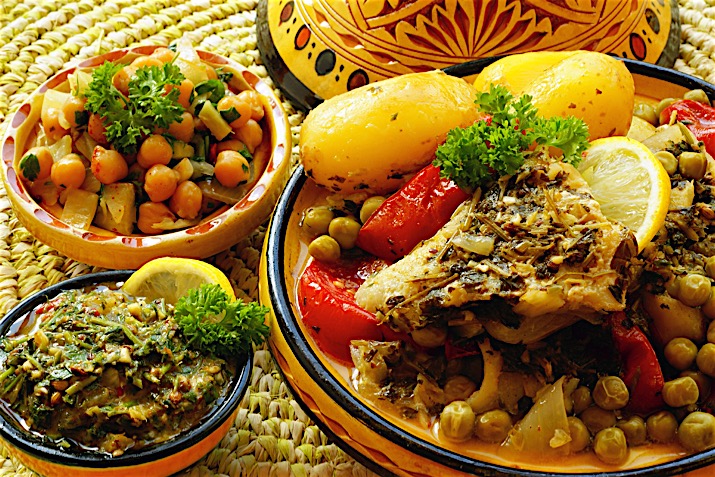 I did a lot of door knocking when I lived in my last neighborhood. Carrying my clipboard and a community-building attitude, I’d stand on the stoop and wait for the door to open. My neighborhood was a cultural melting-pot and often that door would open and release amazing smells, redolent of exotic food cooking in the kitchen. Hmong, Somali, Vietnamese, southern soul food, all greeted my hungry nose. One day, I was carrying a petition to put in more streetlights when I knocked on the door of a tiny set-back house.

When the door opened, a cloud of spicy and intensely garlicky air came whooshing over me. The man who smiled back at me was named Ahmed, and as we talked, he told me he was from Algeria. The scents that emanated from his kitchen enchanted me, and after introducing myself as both a block club leader and a cook, I couldn’t help but ask, “What is that wonderful smell?” He smiled and invited me into the kitchen where he stirred some pots and told me the names of the dishes. After I got a closer look at the chickpeas simmering an a spice-laden tomato sauce, a lamb stew and a pile of vegetables for salad, he agreeably signed my petition and sent me on my way.

I can’t remember what he told me he was making, but I became obsessed with the food of North Africa, and began seeking the heady aromas from that stoop in South Minneapolis.

Couscous, olives and dates summon up an exotic land, a faraway place with wind-sculpted desert sands and camels. North Africa, also called the Mahgreb, is the African slice of the Mediterranean, blessed with the same climate that nurtures some of the most famously healthy cuisine in the world.

North Africa is a region bounded by the deserts of Libya to the East and the Sahara to the South. The ancient Berber tribes who lived there nomadically invented couscous, and lived on fava beans, lentils, wheat, and honey before ships from across the sea began cross-pollinating with the area with new foods.

Lunch is usually the biggest meal of the day, and eaten in the afternoon. Many variations on fresh and grilled vegetable salads are popular, made with bell peppers, eggplant, tomatoes, onions, cucumbers and carrots with olive oil and citrus or vinegar. Couscous and Arab-style flatbreads, fresh sheep milk cheeses, and yogurt are staples.

The tagine is a true symbol of North Africa. The word refers to both the cooking vessel, with its plate-like bottom and conical lid, and the dish that is prepared in it. A tagine may be made from meat, fish or vegetables, and is usually a well-spiced stew, thick with tender, slow braised foods.

The countries of North Africa have their own regional nuances, as well. Morocco is probably the most famous, for its refined haute cuisine style, and subtle uses of spice. Saffron, nutmeg, cinnamon, paprika, cloves and cumin are combined in delicate balance. Dishes often combine sweet and savory, such as lamb with prunes, or chicken with apricots or a little honey drizzled in. Paper-thin pastry dough that is similar to fillo, called brik, is also used to make savory or sweet pastries and pies.

Algeria, the largest country in North Africa, is less well known to many, in part because of a long civil war. Their French occupation and large Jewish population influence the food, which often has some hot and spicy notes. Harissa and cayenne, aniseed, black pepper, cumin, cloves and wild parsley are big seasonings in Algeria.

The coastal area of Tunisia is known for vibrant, spicy fish and vegetable cuisine, while outlying areas are more Spartan, and Berbers sustain themselves on the same diet their nomadic forbears did.

For a taste of North Africa, try couscous or flatbreads with a spicy tagine (see recipe below) and a side salad. For the salad, cut up 4 cups of veggies of your choice and dress them  with a simple dressing of a couple tablespoons of olive oil, a tablespoon of lemon and a clove ofcrushed garlic.

Spice things up your existing repertoire with a tube of harissa—experiment with seasoning a pot of beans or a stew of hearty vegetables with harissa to taste. Using the spice blend Ras El Hanout can also quickly transform a dish. Ras El Hanout means "top of the shop" (as in the best) in Arabic, and can consist of 20-30 or more spices with flavor variations abounding. It can be used as a rub for meats, in tagines, or in stir fries or soups in the early cooking stages (when sauteing onions and garlic, for example).

Balance the spice and savoriness with some sweet fruit, for greater authenticity and flavor harmony, so that in between bites of meat or veg you get a burst of sweet, tangy dates or apricots. Fresh mints, parsley and lemon juice are also great flavor accents to add to your dishes just before serving.

One great healthy benefit of all the vibrant flavors of North Africa is that very little fat is needed to make spectacularly flavorful dishes—there is so much going on that a little olive oil carries the day.

That mysterious stew piqued my interest, and alas these many years later, I may never know exactly what was in it. But I have had a delicious time trying the spices and flavors of the land Ahmed called home.

Check out some North African recipes.

Everyone Saves on Co+op Deals!
END_OF_DOCUMENT_TOKEN_TO_BE_REPLACED