Co-op Addresses Hunger for the Holidays and Beyond 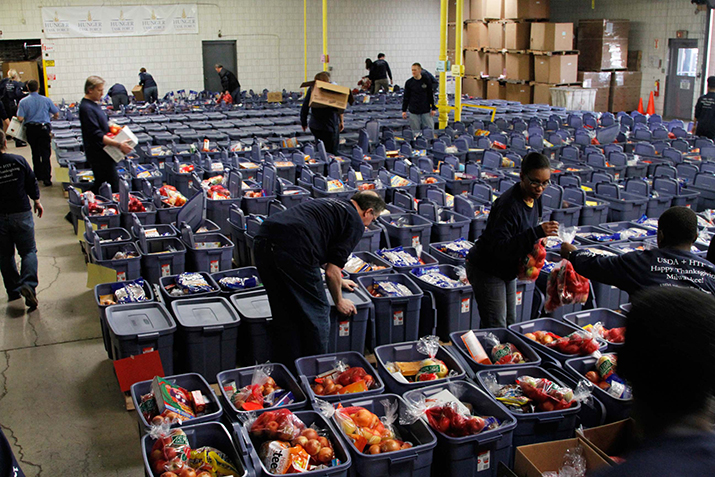 It was 1999 and members of the Outpost Natural Market staff had been filling bags of food with holiday fare. “Buy A Bag” was a brand new program; shoppers at the Milwaukee co-op were invited to contribute $20, which the co-op would match and then use to put together bags filled with green beans, potatoes, apples, canned pumpkin and other items—the makings of holiday meals for families in need.

And then it snowed.

“The snow was just coming down and we’re out there with our single delivery van and all of these bags of food, trying to get them all over the city,” recalls Margaret Mittelstadt, Outpost’s Director of Communications. She laughs, saying that the staff looked at each other that night and all agreed that there had to be a better way.

The next year, they joined forces with Hunger Task Force, a food bank and hunger advocacy program that currently distributes more than ten million pounds of food a year in Milwaukee County. A little Wisconsin snow wasn’t going to hinder them.

Ever since, the two organizations have worked together to bring healthy, organic options to people in Milwaukee in need of food. While Milwaukee is a dynamic and resilient city, it is also the seventh poorest in the country. More than 83 percent of Milwaukee public school children qualify for free and reduced lunch, and unemployment is hovering at about 50 percent for African American males. The work of ending hunger in this city is ongoing.

“Everyone should have adequate food with dignity,” says Hunger Task Force Executive Director Sherrie Tussler. The organization was started in 1974 by a group of parents who were concerned about kids going to school hungry. After battling school bureaucracies to provide free meals to kids in need, the organization expanded to a food bank.

Today, Hunger Task Force delivers food absolutely free of charge to a local network of 80 food pantries, soup kitchens and homeless shelters in Milwaukee County. In addition, they operate a 150-acre farm and 48-tank fish hatchery, and serve as tireless advocates for legislation and policies related to hunger.

Buy A Bag remains an exclusive program of Outpost Natural Market, and last year, shoppers contributed $52,000 to it. Besides these shopper contributions, Outpost is also a participant in Hunger Task Force’s holiday bin program. Every November and December, multiple businesses and organizations band together to fill rubber bins, which the food bank then organizes and delivers to 800 families. Each bin is filled with seasonal food, including a turkey or ham.

Outpost distinguishes itself in this communal effort as the only organization that provides perishable food for the holiday bin drive. “If you go to a food pantry, you get a lot of canned stuff and nothing that screams ‘Happy Thanksgiving,’” says Tussler. “We really appreciate the fresh produce that Outpost gives us.”  In 2012, this included $12,000 worth of apples, potatoes, oranges and sweet potatoes.

Although many of us think of the winter months as the primary lean times, food insecurity is an issue year-round for many families and can hit families the hardest during the summer. Many children receive federally-funded breakfasts and lunches during the school year; providing these meals at home is an extra expense for families during the summer months. “By August,” says Tussler, “many parents are running out of food money. In fact, this is one of the busiest months of the year for many of our food pantries and soup kitchens.”

Outpost has responded to this problem with Think Outside the Lunchbox. This summer program is another partnership with Hunger Task Force, which goes to the heart of the organization’s original mission: providing stable and nutritious lunches for school-aged kids. Outpost collects food and direct cash donations from its customers from June through August, all of which Hunger Task Force uses to provide meals through recreation services, day camps, and other organizations that stay open later during the summer in order to provide lunch and dinner for kids in need.

Tussler is clearly a woman who would be delighted to put herself out of work, should the hunger need be filled. But in the meantime, she’s very grateful for partners like Outpost. “Their contributions really respect people’s health and dignity,” she says. “Anything Outpost contributes is going to be nutritious and usually organic. It's far and above beyond ramen noodles!”

Everyone Saves on Co+op Deals!
END_OF_DOCUMENT_TOKEN_TO_BE_REPLACED