Bins of Beans and Why My Co-op Matters to Me 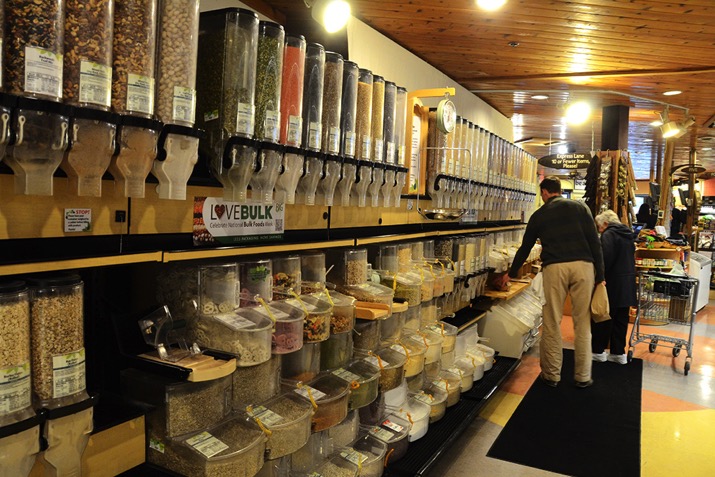 My mother didn’t know what a co-op was, and I grew up on processed food and the limited number of fruits and vegetables almost everybody ate: iceberg lettuce, trimmed carrots, bagged celery and potatoes, and tomatoes from far away. It’s what she knew. She didn’t realize she had a choice, but discovering the co-op when I was a freshman in college opened up a whole new world for me. That world became a way of life. My children grew up on whole-grain foods. They can name scores of vegetables. They can define the word ‘organic.’ They know exactly what a bulk bin is, and they can now operate the nut grinder without my help. They also know what real, fresh, local, vibrant, ethically produced food tastes like.

The first time I ever set foot in my local food co-op, I was a freshman in college. It was 1985. Like my mom, I’d never heard of a food co-op and I had no idea what it was or how it worked. When my new arty, intellectual, Birkenstock-wearing, neo-hippie university friends mentioned going there, I thought it sounded exotic and liberal and everything my supermarket-shopping parents weren’t.

I went to the co-op with my roommate. We shared a funky old house about 8 blocks away, where we liked to sit around with our friends listening to King Crimson and Black Flag and Sonic Youth. We wrote poetry and made food from scratch. My friend had been to the co-op before. She even worked there occasionally and would bring home bags of dried beans or walnuts, freshly ground peanut butter dispensed into recycled jars she kept in the cabinet, and vegetables that looked completely different than the kinds of vegetables I grew up with: fresh carrots with all the greens still attached, big sacks of loose-leaf lettuce, and exotic things I’d never tried: beets, parsnips, shiitake mushrooms.

I could hardly wait to make my own purchases. I planned a glorious soup, unlike anything from a can (the only kind of soup I’d ever remembered eating). We walked the eight blocks, our tote bags filled with empty jars slung over our arms.

“Now, if you get something out of the bulk bin, you have to write the bin number on your jar or your bag,” my roommate explained.

The co-op sits at the end of a street on the edge of the downtown, next to a creek. I’d driven by it hundreds of times and never even noticed it. But when I stepped inside, it was like stepping into a whole new way of life. I literally got a chill down my spine. I was home.

It was smaller than the grocery stores my parents shopped, and that wasn't the only difference. There were no fluorescent lights or massive freezer cases or slick displays of packaged produce. It was just food. Real food. Whole food. Lots of fresh food, everywhere I looked.

And then I saw the bulk bins. I couldn’t believe the variety and abundance. White beans, black beans, kidney beans, pinto beans, lima beans. Dried lima beans! Nuts, seeds, buckwheat groats, oatmeal, bulgur, granola, veggie burger mix (just add water? Amazing!). I’ve always been that person who gets a little too excited about food, so I was probably acting like a major dork over there by the bulk bins, sighing and gasping to myself, but I couldn’t help it, especially when I saw the vats of freshly ground peanut butter, cashew butter, almond butter, and sesame butter. I wanted to buy it all!

As I finally decided to try those exotic dried lima beans, I let go of my cart to take a bag from the roll and write the bin number on it with the grease pencil that was tied with a string to the bag holder. That’s when my cart started to roll. Startled, I turned: There it went, down the aisle, where it crashed rudely into a young man with a very long beard.

“I’m so sorry!” I exclaimed, leaping forward, leaving the grease pencil to swing on its string.

He smiled serenely. “It’s alright. The floors in here are a little crooked,” he said. I looked down. The floors by the bulk bins along the wall did indeed slope precipitously towards the center aisles. “You need to keep a hand on your cart by the bulk bins,” he advised.

I went home that day with a bag of dried lima beans, a jar of cashew butter, a loaf of grainy, seed-filled rye bread, and enough celery, carrots, onions, and garlic to make a pot of bean soup so large that it fed us all for almost a week. It was the last time I ever bought dried lima beans—by the time we were done with that soup, I never wanted to see another one again—but it was only the first of thousands of visits to the co-op.

Almost 30 years later, I still get a little rush of excitement whenever I walk into that building. Sure, it’s different than it used to be. They’ve got a bigger selection, a lot of packaged foods, a nice bakery, an impressive deli, and a lot of the modern conveniences one would expect from a grocery store today. Local foods are proudly marked throughout the store and the produce section is robust and inviting.

But the bulk bins are still there, just like they were in 1985. The peanut butter and almond butter are grind-your-own now, but they are still sold in bulk, and you can bring your own jars--for maple syrup, honey, and olive oil, too. Some shoppers still wear Birkenstocks and mingle happily with the old hippies, the young college students, and everybody in between who shops there.

The crooked floor is still there, and I’m now an expert at keeping my cart from escaping, but I recently heard the co-op will be moving soon, to a newer, larger building. I imagine the floors won’t slope from one end to the other. I imagine I won’t need a third hand or a jutted hip to somehow secure my cart while I fill my bag with dried beans. Strangely, I’ll miss that.

But the spirit will be the same. So will the fresh natural food, the jovial fellow shoppers, and that sense of camaraderie you can feel the moment you walk in the door. At the co-op, I'll shop alongside others who also quest for health. I'll find others who believe that what we put into our mouths matters, not just because of its nutritious value, but because of where it came from, who prepared it, how they were treated, and how far it travelled from origin to dinner plate. People who shop at co-ops want to eat something really good—in every sense of the word. This is why my co-op matters to me, and this is why I still shop there. I’ll never forget how much I’ve gotten out of co-op membership over the years. Food means more to me now than it would have if I had never shopped at a co-op. As far as I’m concerned, the fact that my co-op is not only still standing, but growing, expanding, and competing with traditional grocery stores as well as other health food chains out there means the world is changing for the better. That’s reason enough to be a member. Count me in.

Everyone Saves on Co+op Deals!
END_OF_DOCUMENT_TOKEN_TO_BE_REPLACED