Get Your Goat On! Or Dreams of Capricorn Heaven 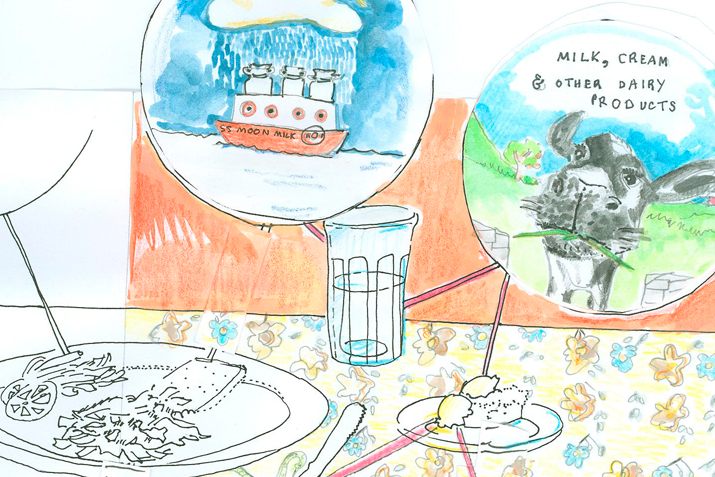 When you make friends with people, you make friends with their dreams. My friends listen to me talk about the novels I have written and hope to sell, the sweet pea and dahlia garden which makes me fret, and the chocolate mousse and port wine parties I will one day host. As you see, dreams come in many sizes and size is not necessarily an indicator of feasibility. I have not successfully harvested sweet peas for over a decade, to take one truly minor example.

This month, I got to walk inside one of my friend’s dreams, to see what she had realized and what lies ahead. Erin’s is a dream of goat heaven, inspired by Tom Robbins’ Even Cowgirls Get the Blues ("Goats are always testing you," says a character in Robbins' novel. "They can tell instantly if you're faking your feelings. So they play games with you to keep you true. People should go to goats instead of psychiatrists." These and other quotes can be found here: Goats in Mythology & Literature.) and supported by her willingness to read about, experiment with, and practice the many branches of goatology. Several years into her study and practice, she owns a piece of land with a barn that she has fitted to suit her menagerie, which includes anglo-nubians, oberhaslis, and cross-breeds. She also makes cheese curds, feta, and chèvre. So far as dairy products are concerned, Erin’s loop is pretty well closed, meaning she oversees the production of her milk and cheese from setting her girl goats up on dates with a randy buck to birthing the baby goats that keep her nannies producing to milking those mamas to making lactic delectables on her very own stove. In addition to these jobs, she keeps chickens (who feed in the goat pen to keep down parasites) and tends a vegetable garden. All while holding down an off-farm job.

Phew. Just describing all of it tires me out.

But that’s the thing about dreams: they can be a source of energy.

Erin lights up like a thousand watt bulb when she talks about her goats: Zelda is the star-crossed lass of the group---she has teeny tiny teats that Erin uses three delicately poised fingers to milk. Zelda can’t defend herself against the other nannies, but she exacts revenge whenever she gets a chance, usually in the form of a down-and-dirty head butt; Miss Yvonne, by contrast, is imperious and impatient---she challenges Erin to be well organized and snappy in her milking; otherwise, buckets and unwary cats will fall or go flying. While Zelda practically ran to the milking bench the morning I visited, Miss Yvonne slowly sashayed through the gate and led Erin on a chase around the barn after the milking. About my own attempt to milk these goats, I will say this: it surely looked easy. And though I enjoyed the feel of the teats with their short coat of hair and consistency and temperature of bread dough, I found it hard to get my fingers pulling, squeezing, and releasing in the right rhythm. It was a relief, after my fumbling efforts, to watch Erin smoothly work each teat and hear the sputter of milk filling her enamelware stockpot. 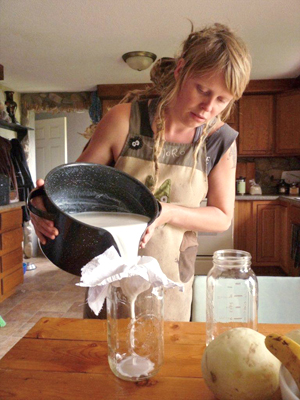 Altogether, Erin’s goats produce about a gallon of milk a day, which necessitates making cheese every other day. She strains the milk into quart jars directly after milking, gets a little breakfast in herself, and then begins moving the various kinds of cheese through different production stages. She starts by cutting and salting some curds and mixing brine for others. Then she washes her chèvre kit, pulls out packets of rennet and mesophilic culture, and sets to getting the milk to the right temperatures for infusing and curdling. Like the milking, managing the tools of cheese making requires a certain amount of bodily habit that only comes about through ceaseless repetition, or what Malcolm Gladwell refers to as the “10,000 hour” rule. Erin is quick to point out that goat tending feels easier, these days, than cheese-making. She dreams of making her living one day with the goats, on the farm. This could take the form of a soap-making business, a goat meat CSA, or some other plan that just hasn’t occurred to her yet. To me, all of these plans seem difficult, amazing, and eminently worth the bother: the best dreams always are.

Over the decade or so that I have been paying attention to food systems, food re-localization, and self-sufficiency movements, I have heard a lot of talk about realism and naïvete. What is closest to the truth is that we tend to dismiss dreams we don’t share as childish or bothersome. We are never more realist than when we are popping other people’s balloons. Friendship, I learned from Erin, allows us to dig in and pay attention to each other’s dreams and to understand how each individual dream contributes to the identity and power of a community.

Everyone Saves on Co+op Deals!
END_OF_DOCUMENT_TOKEN_TO_BE_REPLACED