And the Secret Ingredient Is...Beer 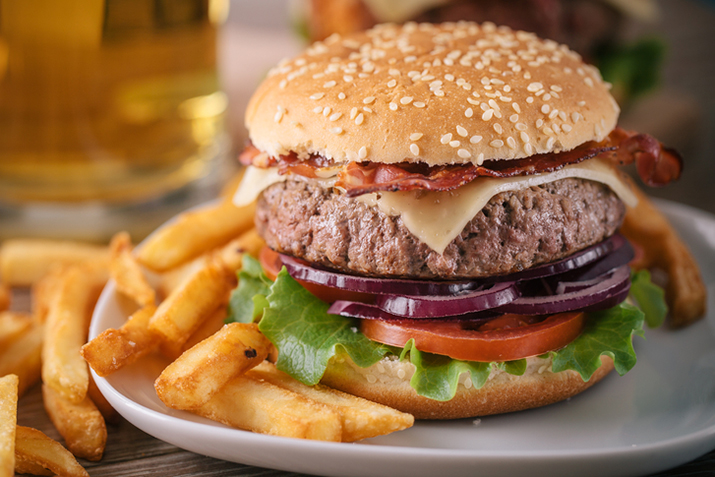 My earliest memories of beer are of my father making his home brew. Somewhere, he had picked up a ceramic crock and the most rudimentary of beer-making tools, and made beer in the basement. As a little girl, I had no interest in the beer itself, but the drama, well, that stuck with me. A beer-brewing session might mean a party, with exciting guests. Then there was the beer itself, occasionally exploding in the bottle, raining down beer all over the basement. I loved the bottle capper, and wanted to run my hands through the box full of shiny flat disks that were going to be clamped onto each bottle.

The occasional extra beer made it into beer bread, my mom's go-to beer recipe. For a quick bread, beer bread had more of the complexity of a slow-risen loaf, courtesy of the fermented, yeasty flavors in the beer. Dad made a simple dark beer, an alternative to the weak American lagers that dominated the market back then. This was long before the revolution in home brewing that we see happening now.

These days, you don't have to brew your own to get your hands on a great selection of beers. From the blackest stouts to the lightest of summer ales, craft beers have become a booming business in the US. Wherever you live, there are upstart breweries making interesting ales, stouts, lagers and more.

Along with a newfound interest in enjoying beers with food, many beer lovers have been learning to cook with beer. Like wine or spirits, beer is a distinctive and flavorful ingredient. And also like wine and spirits, it also has alcohol, which acts as a solvent to break chemical bonds in other foods, liberating more flavors. Alcohol also affects your palate, opening up pores on your tongue that sense heat, so a higher alcohol beer will make hot food taste hotter, while a lower alcohol one will help bubble away a hot sensation. In cooking, remember that water boils at 212⁰F, while alcohol evaporates at 173⁰F. That means that unless you boil the beer for a few minutes, some alcohol will remain, giving the food a slight peppery flavor.

Beyond alcohol, beers offer a wide selection of flavors, colors, and intensity. To select a beer to cook with, you need to know the beer's flavor profile. An English cream stout is going to be sweet with just a little bitterness, with lots of chocolate, malt and roasty flavor. That's why we love to put it in chocolate cake, ice cream and other desserts. A dry Irish stout is less sweet and moderately hop-bitter. Your local beer artisan may be concocting unique variations on stout, so when you plan on using the beer in a dessert, it pays to get a good description.

One important factor in using beer in cooking is bitterness. Depending on your palate, bitter is a flavor you don't want too much of and it needs to be in balance with some sweetness and fat. One trend in craft brewing has been to add lots and lots of hops to some beers, which makes them more bitter. So, if a beer touts its hoppiness, know that it will have that bitter kick. When you plan on cooking with beer, and will be boiling it for a few minutes, the flavors will be concentrated, so if you start out with an India pale ale, bitter flavors will be prominent.

If you are used to cooking with wine, you may be in the habit of reducing the wine to concentrate the flavors and thicken the sauce. With beer, you want to cook the alcohol away with a brief boil, and avoid concentrating the strong flavors too much. Just thicken the sauce with flour, starch or pureed vegetables, depending on the dish.  Some sweetness from root vegetables, caramelized onions or even some barley malt or brown rice syrup will balance the hops flavors.

So how do you get started with playing with beer in the kitchen? A simple and straightforward way to try your fave beer in a recipe is to add it to marinades for meat. Most marinades are balanced with a bit of sweet and some acid, so using beer as a base will give you a good flavor. Using beer in place of water or stock is also good, although you may want to start with replacing half, the first time out. Poaching fish and seafood in lighter, less hoppy beers is a great method, and you can use the poaching liquid to make a sauce. Baked goods with beer in place of the liquid are also nice, and it's easy to balance because you usually add some sweetener to those. Dark beers and chocolate are made for each other, so any chocolate cake or ice cream is enhanced with a bit of stout or porter.

Enjoy your beer with food, and cook with it too. Once you get the hang of it, beer is another deeply flavorful ingredient to add to your culinary pantry. And the cook always gets to taste a sip before it goes in!

Get started with our cooking with beer recipes.

Everyone Saves on Co+op Deals!
END_OF_DOCUMENT_TOKEN_TO_BE_REPLACED