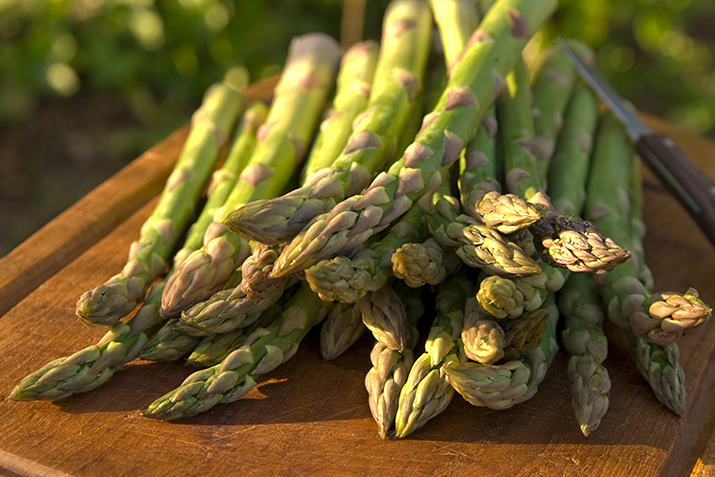 Springtime is synonymous with asparagus. After the long winter, the dormant energy of the asparagus plant shoots upward, cracking open the soil in search of sunlight. For asparagus aficionados, the weeks when local asparagus comes in season can be a festival of sorts. In fact, “Spargel” season in Germany is an annual celebration, with the fat, white spears appearing on menus everywhere.

Like many vegetables, the spread of asparagus can be traced back to the ancient Romans and writings from the 1st century AD described asparagus as being “three to the pound” because the spears were so fat. The debate over whether fat or thin spears are preferable continues to this day, with some devotees preferring thin, some thick.

In Germany, France and Belgium, fat white asparagus has long been preferred—the most prized spears are a little over an inch thick! To keep it white, growers must pile dirt on the emerging spears to keep them from exposure to the sun. This is labor intensive, so white asparagus is always more expensive. The lack of color (and some would say, flavor) of white asparagus is also a sign of fewer nutrients, as it doesn’t get to concentrate all the antioxidant pigments that it would growing in the sun.

Both white and green asparagus are rich in folic acid, with a 5.3 ounce serving providing 60% of the recommended daily allowance (RDA). Folic acid is important for the liver and to prevent neural tube defects in babies in the womb. More recently, studies show that it keeps our brains healthy as we age. Asparagus is also a good source of potassium, with 400 mg per serving.

So when you pick up your bunch of asparagus, how do you prepare it? The French way would be to peel the lower half of the fattest spears you can find, steam them standing up in a special steamer and serve them whole with a rich hollandaise sauce (a thick sauce made from egg yolks, lemon juice and butter). Belgians like to mash asparagus with boiled eggs and lemon. I’m partial to roasting or grilling, because the high heat concentrates the asparagus essence. Toss asparagus spears with olive oil and roast or broil them until the tips start to curl and brown, then sprinkle with coarse salt and cracked pepper. On the grill, you may want to invest in a grill tray or pan that will keep them from falling into the fire. You can also place the oiled spears directly on the grate; just stay close and turn carefully—they will cook quickly.

In many dishes, snapping off the tough base, chopping the mid-stalk and then reserving the tips for garnish is in order. A fine soup can be made by simmering the bottoms in water for a stock, then sauteing the chopped middles with onions and pureeing. Float the blanched tips on each bowl of soup. Asparagus makes a great addition to pastas, quiches and frittatas as well—it can be added or substituted for other vegetables in most any of these; as with the soup, displaying the tips on top gives these dishes a visual flourish. Asparagus also makes a flavorful pizza topping—pair it with goat cheese or caramelized onions or bacon or prosciutto.

While asparagus is most commonly eaten cooked, it's also quite good raw. In Italy ultra-fresh spears are thinly sliced on the diagonal (fat spears are traditionally used) and dressed with vinaigrette for a simple salad. For a seasonal appetizer, peel the stems and serve asparagus as a delightful dipper.

Go ahead, have an asparagus themed potluck, and revel in the freshest asparagus—from salad to soup, pizza and pasta, the sky's the limit.

Everyone Saves on Co+op Deals!
END_OF_DOCUMENT_TOKEN_TO_BE_REPLACED