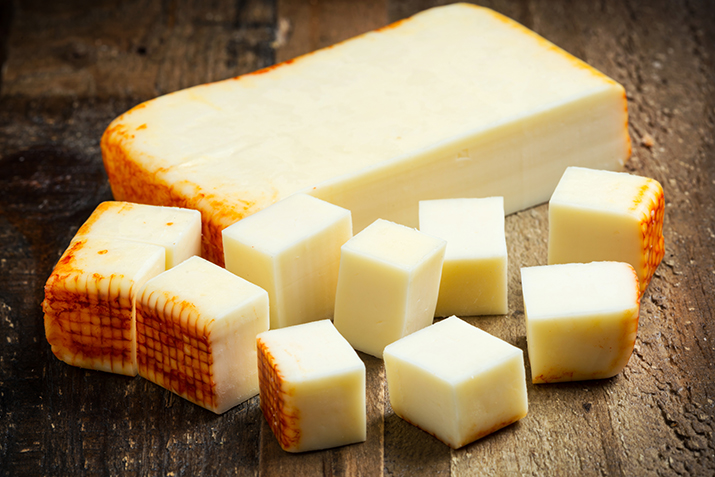 Benedictine monks first mastered the making of muenster cheese in France around the 7th century. They produced the washed-rind cheese in their monasteries—hence the name—and then taught local peasants how to make it. Today, varieties of muenster are also made in Germany, Denmark and the United States (most notably Wisconsin), though French munster (as it's spelled there) has a more pronounced flavor than varieties produced elsewhere.

White or creamy yellow with an orange to red rind, muenster is traditionally made from raw cow's milk, though pasteurized cow's milk is used in the U.S. today. The rind is typically washed and rubbed with rock salt and annatto (a natural dye derived from achiote seeds). The cheese is then aged outdoors for a week followed by indoor aging for two months or more. Muenster's mild, salty flavor strengthens as it's aged; older varieties can be tangy and slightly acidic. Muensters range from four ounces to several pounds. Munster Lisbeth can only be made by dairies in the Alsace area of France, while the variety made in Lorraine, France, is called Munster-Geromé.

Described as a cross between sharp jack cheese and American white cheese, Muenster is suitable for everything from snacking and fancy appetizers to macaroni and cheese or potato casseroles. Use it in a variety of egg dishes, like omelets, quiches and this Asparagus Strata with Zesty Mediterranean Garnish. A good melter, it's also the perfect choice for Chicken Quesadillas with Salad and Chipotle-Lime Dressing and Kid-friendly Cheesy Black Bean Quesadillas.

Slice muenster onto burgers, or sandwich it between seeded rye bread for a deli sandwich or grilled cheese. In fact, a tiny bowl of caraway seeds is sometimes served with muenster.

Though mild, muenster is distinctive enough to hold its own alongside a loaf of crusty French bread and a bottle of Beaujolais or—for added authenticity—serve your French munster with an Alsatian Gewurztraminer and your German variety with a German ale.

Store cheese wrapped in waxed or cheese paper in the refrigerator, but, for full flavor, serve muenster at room temperature. While the rind is edible, it's bitter and so is usually removed.

Everyone Saves on Co+op Deals!
END_OF_DOCUMENT_TOKEN_TO_BE_REPLACED